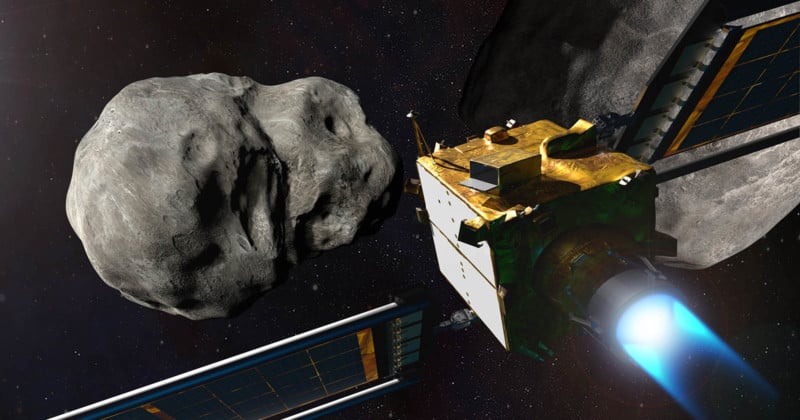 NASA is set to intentionally crash its Double Asteroid Redirection Test (DART) spacecraft into the asteroid Dimorphos tonight, and thanks to a , viewers on earth will be able to watch the first-ever planetary defense test in through a dedicated livestream.


DART launched into space on the SpaceX Falcon 9 rocket back on November 23, 2021, and it is finally arriving at Dimorphos after an 11-month journey of 7 million miles (11M km). The tiny moonlet has a diameter of just 560 feet (170m), making it one of the smallest astronomical objects ever to receive a permanent name.

Ways to Watch DART Slam Into Dimorphos at 7:14 ET

First, NASA’s YouTube channel is hosting an impact broadcast that will serve as the central livestream for the most up-to-date info:

The channel will also have a live feed from the DRACO camera aboard DART. DRACO, which stands for Didymos Reconnaissance and Asteroid Camera for Optical Navigation, is the sole instrument aboard the spacecraft that serves as its eye and navigation guide.

The stream will be a real-time feed from DRACO, which will be beaming one image per second to Earth during DART’s approach — note, however, that the images will be delayed due to the time it takes for the data to be beamed to Earth as well as some processing time before they are shared online.

“In the hours before impact, the screen will appear mostly black, with a single point of light,” NASA says. “That point is the binary asteroid system Didymos which is made up of a larger asteroid named Didymos and a smaller asteroid that orbits around it called Dimorphos.

“As the 7:14 p.m. EDT (23:14 UTC) impact of asteroid Dimorphos nears closer, the point of light will get bigger and eventually detailed asteroids will be visible.”

The Virtual Telescope Project will also be hosting a livestream with live observation and discussion of the impact:

After DART impacts the asteroid, the feed will go black when the signal is lost. After 2 minutes of a black screen, NASA will be switching the livestream into a replay that shows the spacecraft’s final moments before impact.

At 8:00pm EDT (5:00pm PST, 0000 GMT), NASA will be holding a press conference to discuss DART’s impact, and this will be streamed on NASA Live, the official stream of NASA TV:

In addition to the main camera onboard DART that will be destroyed on impact, there will also be a separate camera satellite documenting the whole thing. Back on September 11th, DART deployed the Italian-made LICIACube, which stands for Light Italian CubeSat for Imaging Asteroids.

The two camera systems aboard LICIACube will record DART’s impact and provide NASA scientists with additional imagery and data to evaluate in the aftermath of the test.

The Asteroid is NOT a Threat

Just in case there’s confusion around this unusual event, NASA is reminding the public that DART’s mission is simply a test of whether dangerous asteroids could one day be diverted using spacecraft impacts.

“DART is a spacecraft designed to impact an asteroid as a test of technology,” NASA says. “DART’s target asteroid is NOT a threat to Earth.

“This asteroid system is a perfect testing ground to see if intentionally crashing a spacecraft into an asteroid is an effective way to change its course, should an Earth-threatening asteroid be discovered in the future.”

“This is an exciting time, not only for the agency but in space history and in the history of humankind, quite frankly,” NASA planetary defense officer Lindley Johnson said in a press conference on September 22nd. “This demonstration is extremely important to our future here on Earth.”

Update on 9/27/22: DART successfully impacted the asteroid at the predicted time. You can see footage of the test from multiple vantage points here.