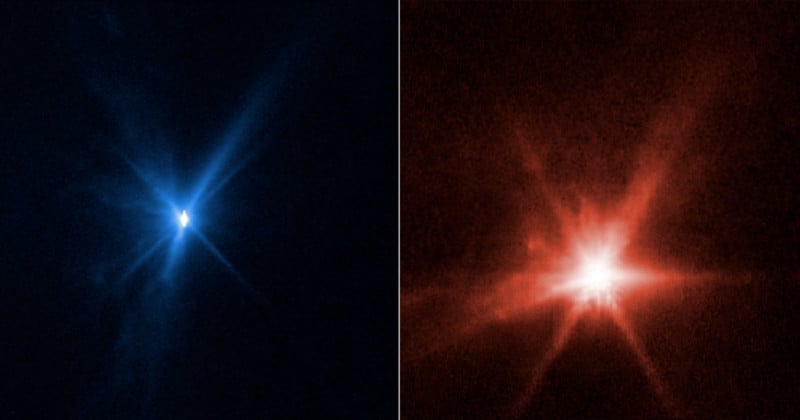 The James Webb Space Telescope and the Hubble Space Telescope both managed to capture detailed images of the impact of the planetary defense Double Asteroid Redirection Test (DART). It is the first time that Webb and Hubble have simultaneously observed the same celestial target.

While NASA said that both the James Webb Space Telescope and the Hubble Space Telescope would attempt to capture the impact of DART with the asteroid Dimorphos, since neither was designed for such an observation, expectations were tempered. Amazingly, both did manage to succeed, adding to the image data that was also collected by the LICIACube.

The two space telescopes each captured unique views of the NASA experiment to divert an asteroid, a test that was conducted to determine if the organization had the capability to avert a global disaster should an asteroid threaten Earth.

NASA says that the coordinated Hubble and Webb data, which is the first time the two have been used to observe the same celestial target at the same time, are more than an operational milestone for each telescope, but are also key science questions relating to the makeup and history of our solar system that researchers can explore when combining the capabilities of these observatories.

“Webb and Hubble show what we’ve always known to be true at NASA: We learn more when we work together,” NASA Administrator Bill Nelson says. “For the first time, Webb and Hubble have simultaneously captured imagery from the same target in the cosmos: an asteroid that was impacted by a spacecraft after a seven-million-mile journey. All of humanity eagerly awaits the discoveries to come from Webb, Hubble, and our ground-based telescopes – about the DART mission and beyond.”

The Webb telescope took one observation of the impact location before the collision took place and then several more over the next few hours using its Near-Infrared Camera (NIRCam). The images below, shown in an animated gif, is a timelapse that covers the time of just before the impact through five hours post-impact.

While the Webb telescope is impressive as the latest and most powerful space observatory the world has ever seen, it was not designed for the unique requirements to capture a fast-moving object like an asteroid. Still, the Webb team overcame the challenges and NASA explains that the teams performed additional work in the weeks leading up to the impact to enable and test a method of tracking asteroids moving over three times faster than the original speed limit set for Webb.

Webb was able to observe the impact over a total of five hours and took 10 total images.

Hubble also captured the DART impact, first just ahead of the collision and then again 15 minutes after the satellite impacted Dimorphos. The legendary observatory captured the impact using its Wide Field Camera 3 and shows it in visible light. In total, Hubble captured 45 images of the event.

“Ejecta from the impact appear as rays stretching out from the body of the asteroid. The bolder, fanned-out spike of ejecta to the left of the asteroid is in the general direction from which DART approached,” NASA explains.

“Some of the rays appear to be curved slightly, but astronomers need to take a closer look to determine what this could mean. In the Hubble images, astronomers estimate that the brightness of the system increased by three times after impact, and saw that brightness hold steady, even eight hours after impact.”

Hubble is being tasked with observing the Didymos-Dimorphos system 10 more times over the next three weeks, a relatively long-term observation that will show how the ejecta cloud expands and fades over time and will help astronomers paint a more complete picture of the aftermath of the impact.

“When I saw the data, I was literally speechless, stunned by the amazing detail of the ejecta that Hubble captured,” Jian-Yang Li of the Planetary Science Institute in Tucson, Arizona, who led the Hubble observations, says. “I feel lucky to witness this moment and be part of the team that made this happen.