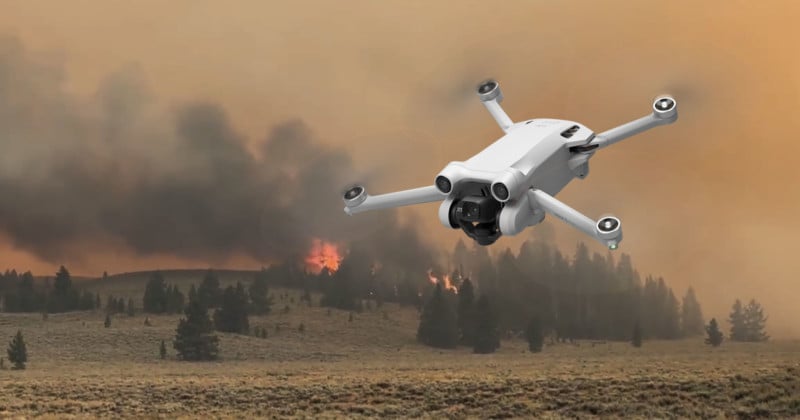 The U.S. Forest Service in the Sawtooth National Forest, Idaho has issued a warning to drone pilots to stay away from wildfires as there have been two recent incursions in the area, where one got “extremely close” to a firefighting helicopter while in flight.

The Forest Service has issued a warning against flying drones near wildfires as it is dangerous to crews that are trying to combat the blaze, KTVB reports.

“Recently, there have been two drone incursions on the Ross Fork Fire. One of the drones came extremely close to a helicopter while it was in flight,” the Forest Service says in a post on Facebook.

Video of the Ross Fork Fire at the North edge of Smiley Creek in Blaine County, Idaho. 9/5/2022 6 pm. pic.twitter.com/ay0YZWg1p7

“Flying a drone near a wildfire is dangerous and can cost lives. Firefighting aircraft fly at very low altitudes, typically just a couple of hundred feet above the ground, the same altitude as drones flown by members of the public. When people fly drones near wildfires, the incident grounds firefighting aircraft to avoid the potential for a midair collision. Delaying airborne response poses a threat to firefighters on the ground, residents and property in nearby communities, and it can allow wildfires to grow larger. If You Fly, We Can’t.”

The Federal Aviation Administration (FAA) has issued a temporary flight restriction for the Ross Fork Fire area, which. means that all aircraft — drones included — are prohibited from flying in the restricted area unless they are operated by an agency assigned to fighting the fire.

“It’s a federal crime, punishable by up to 12 months in prison, to interfere with firefighting efforts on public lands. Additionally, Congress has authorized the FAA to impose a civil penalty of up to $20,000 against any drone pilot who interferes with wildfire suppression, law enforcement or emergency response operations,” the Forest Services adds.

“If you see a drone flying in the area of the Ross Fork Fire, please report it immediately to the Blaine County Sherriff’s Department and the Boise FAA Flight Standards District Office […] with as much information as possible. Thank you for your assistance.”