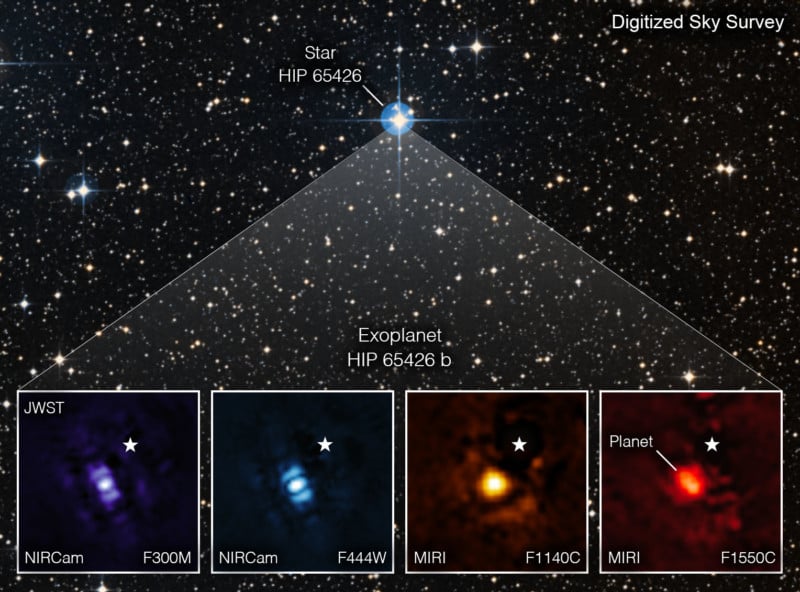 The James Webb Space Telescope (JWST) has captured its first direct image of a planet outside the Solar System. This exoplanet is a gas giant that has six to 12 times the mass of Jupiter and is relatively young: between 15 and 20 million years old.

Astronomers used four different light filters on the JWST for the observation of the planet, which has been called HIP 65426 b. The planet was originally discovered in 2017 using the SPHERE instrument on the European Southern Observatory’s Very Large Telescope in Chile and was observed using short infrared wavelengths of light. The JWST can see longer infrared wavelengths and was able to reveal more information about the planet that was obscured due to interference from Earth’s atmosphere — a problem that happens with ground-based telescopes.

NASA explains that both the Near-Infrared Camera (NIRCam) and Mid-Infrared Instrument (MIRI) are equipped with coronagraphs, sets of tiny “masks” that block out starlight and enable the new telescope to take direct images of certain exoplanets. As exciting as this is for scientists today, the Nancy Grace Roman Space Telescope — currently planned to launch in the late 2020s — will feature a even more advanced coronagraph.

Photographing exoplanets can be challenging for a number of reasons, but one of the biggest is that they are so much less bright than the stars they orbit. For example, HIP 65426 b is about is more than 10,000 times fainter than its host star in near-infrared, and a few thousand times fainter in mid-infrared.

It becomes especially challenging if a planet is close to its star, which obscures it further. In the case of HIP 65426 b, it was distant enough from its star that the JWST could separate it and image it independently — it is about 100 times farther away from its host star than Earth is from the Sun.

Each of the four filter images shows a slightly different “blob of light,” as NASA says, because of the particulars of the JWST optical system and how it translates light through different optics.

Why don’t these look like images of our solar system captured by Juno or Cassini? Space is big and exoplanets are small — and far away from us! Don’t forget, we didn’t get our first detailed look at Pluto until 2015 when New Horizons visited. pic.twitter.com/En3zsZa0Wc

“Obtaining this image felt like digging for space treasure,” Aarynn Carter, a postdoctoral researcher at the University of California, Santa Cruz, who led the analysis of the images, says. “At first all I could see was light from the star, but with careful image processing I was able to remove that light and uncover the planet.”

This is not the first direct image of an exoplanet ever captured, it is just the JWST’s first — Hubble has also captured direct photos of exoplanets. That said, this is just the start of what Webb will see.

“I think what’s most exciting is that we’ve only just begun,” Carter said. “There are many more images of exoplanets to come that will shape our overall understanding of their physics, chemistry, and formation. We may even discover previously unknown planets, too.”