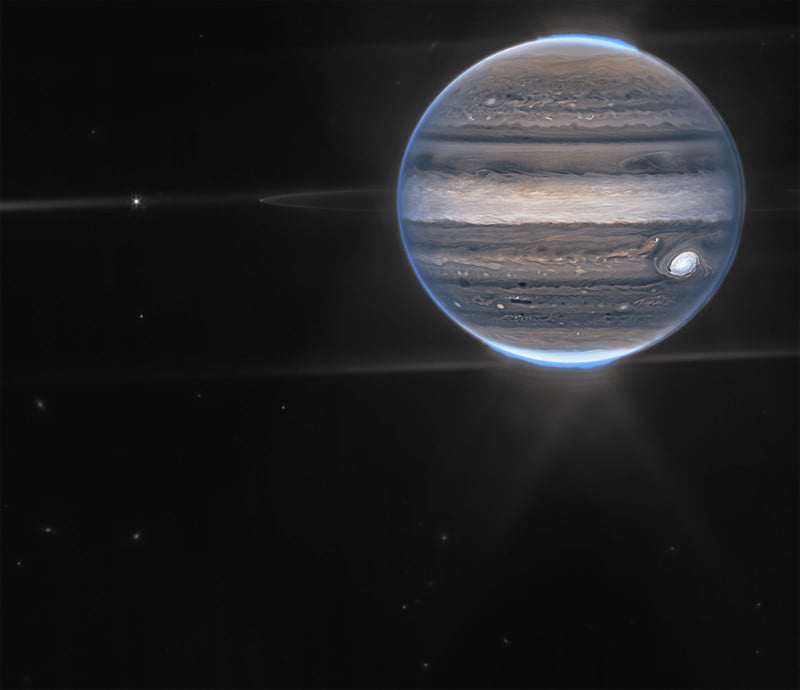 The James Webb Space Telescope (JWST) has aimed its impressive camera system relatively close to home and captured a pair of gorgeous photos of Jupiter’s auroras.

The pair of images, published by the European Space Agency (ESA) and spotted by Engadget, shows both a wide and close-up view of the gas giant’s gorgeous storms, winds, and auroras whose observations will give scientists more clues to what it is like on Jupiter.

The first image, above, is a wide-field view that showcases Jupiter’s and its faint rings (which the ESA says are a million times fainter than the planet itself) along with two of its moons: Amalthea and Adrastea. The “fuzzy” spots in the lower background are what ESA scientists speculate are galaxies “photobombing” the Jovian view.

“With giant storms, powerful winds, auroras, and extreme temperature and pressure conditions, Jupiter has a lot going on. Now, the NASA/ESA/CSA James Webb Space Telescope has captured new images of the planet. Webb’s Jupiter observations will give scientists even more clues to Jupiter’s inner life,” the ESA says.

The photo is a composite image from the JWST’s NIRCam instrument (two filters) and was captured on July 27, 2022.

The second photo, below, is a closeup of the gas giant again using JWST’s NIRCam and three of its specialized infrared filters that are used to reveal details of the planet. The NIRCam captures in infrared light, which is not visible to the human eye. To make the image something that can be enjoyed, astronomers collaborated with citizen scientist Judy Schmidt to translate the Webb data into visible images. Longer wavelengths of light appear redder while the shorter ones appear bluer. 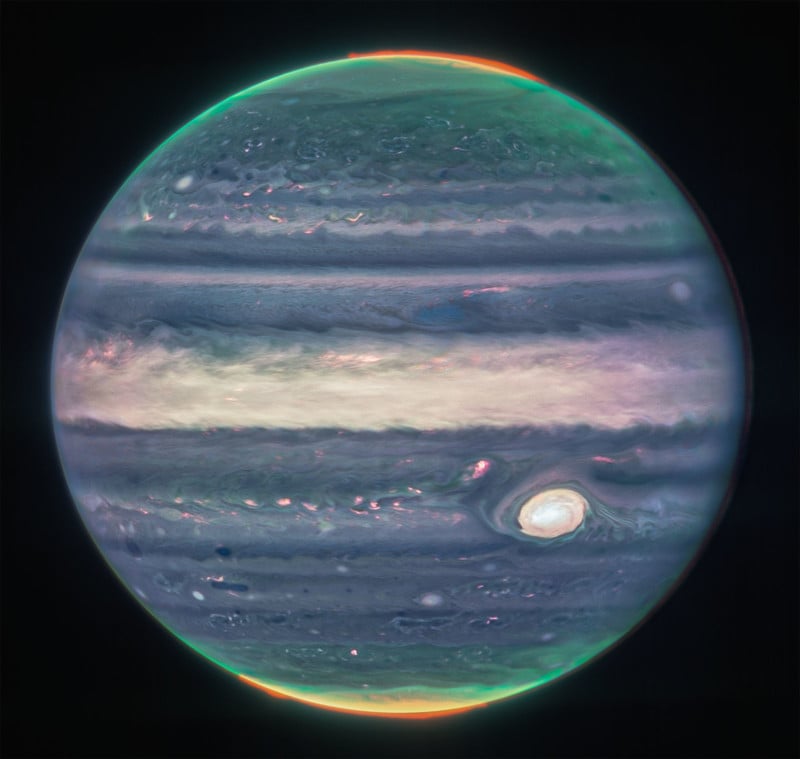 The photo has been created from a composite of several images taken from the JWST and shows visible auroras that extend to high altitude above both the northern and southern poles of the planet.

“The auroras shine in a filter that is mapped to redder colors, which also highlights light reflected from lower clouds and upper hazes. A different filter, mapped to yellows and greens, shows hazes swirling around the northern and southern poles,” the ESA explains.

“A third filter, mapped to blues, showcases light that is reflected from a deeper main cloud. The Great Red Spot, a famous storm so big it could swallow Earth, appears white in these views, as do other clouds, because they are reflecting a lot of sunlight.”

These photos are the second batch that the JWST has captured of Jupiter. The first set was revealed in mid-July and was part of the telescope’s commissioning report. Webb captured those photos of Jupiter during a performance test for its ability to track moving targets — a test it passed handily.