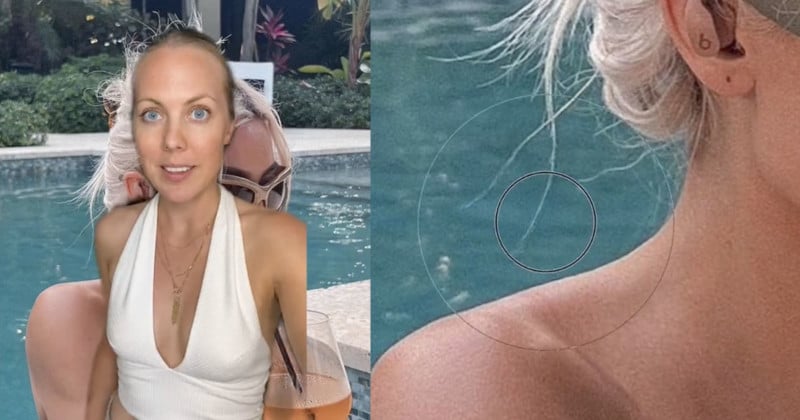 A commercial photographer is teaching “media literacy skills” on TikTok by revealing how celebrities like Kim Kardashian edit their photos.

Photographer and Educator Caroline Ross shared a viral video on TikTok this week where she asked viewers if they could tell what was “fake” about Kardashian’s recent post on Instagram in which she poses in a bikini while sipping a drink by a swimming pool.

In the clip, which amassed 7.4 million views, Ross challenges TikTok users to test their “media literacy skills” and analyzes how editors had altered Kardashian’s photo, reports In the Know.

@caroline_in_thecity Nerd out with me and test your media literacy skills! Can you tell what is fake in this image? #medialiteracy #photoshopskillsonfleek #carolinesediting #photoshopgametime #greenscreen #greenscreenvideo ♬ original sound – Caroline In The City

Ross begins by explaining that Kardashian is “notorious for Photoshopping out her traps,” meaning the trapezius muscles that protrude over the neck and shoulders.

The photographer was bewildered by the star’s desire to Photoshop her trapezoid-shaped muscles but speculated that editing them out “maybe made her neck look smaller.”

Revealing how it was evident that Kardashian had edited the photograph, Ross pointed to the smooth patch of water directly behind the star’s neck, which indicated a warping of the image.

Ross then used the Liquify tool in Photoshop to restore the photo and show what the image would look like without editing.

As she uses the Liquify tool on Kardashian’s image, Ross explains how “the water reflection in the background starts to look a lot more natural and you don’t have that warped effect.”

As Ross corrects the image, she exposes what the unedited photo actually looks like and it becomes obvious that the picture Kardashian released is manipulated.

For extra proof, Ross then repeatedly compares the star’s Instagram post to a screenshot from the “Behind the scenes” footage of Kardashian’s photoshoot. The photographer notes that “you can see her neck and trapezoids” in the footage unlike on Kardashian’s social media image.

TikTok users applauded the photographer for teaching them “media literacy” — with many viewers commenting they had never noticed Kardashian’s Photoshopping of her trapezius muscles in her images.

“The fact that I would never have noticed but it’s painfully obvious after the fact,” a TikTok user writes.

“Well this explains why I never like my shoulder in pictures,” another remarks.

Meanwhile, another TikTok user commends Ross saying that it is important that viewers realise the Kardashians social media posts are “all just illusions.”

Professional photographers receive outrageous Photoshop requests all the time. Photographers Megan Kelly and Rachel Canale shared the wildest editing requests they had ever received with Petapixel.