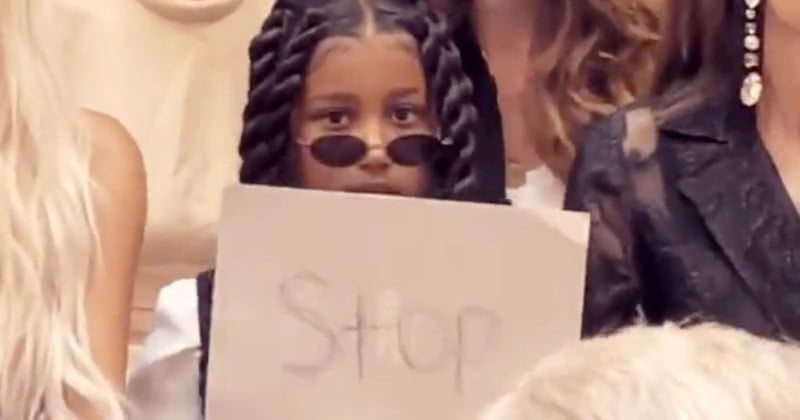 A video of Kim Kardashian’s eldest daughter, North West, holding up a handwritten sign telling photographers to “stop” taking photos of her at Paris Fashion Week has led to a fierce debate about paparazzi filming celebrity children.

In the viral video, nine-year-old West is filmed sitting alongside her mother on the front row at the Jean Paul Gaultier Couture show on July 5. West then holds up her invite to the runway show with the word “STOP” written in large letters across the page to the photographers taking pictures of her.

For anyone who knows North knows how funny she finds this video! North I guess had it with the people taking pictures of her so she wrote on her invite STOP and held it up and wanted them to just focus on the show… 😂🫶🏼🫣 pic.twitter.com/29F26ooy8A

The clip was one of several encounters where West confronts the paparazzi following her during Paris Fashion Week. In another viral video, she complains as she faces swarms of photographers as she leaves a building and asks them, “Why do you have to wait for us all the time?” The paparazzi continue taking pictures of West before one replies back, “because you’re so famous. We love you, North!”

In a separate encounter, West expressed her displeasure at the paparazzi in Paris last week as she exits her vehicle. She claims the crowd of photographers had been “following” her “all the time” and tells them that they “need to stop.”

The clips, which amassed millions of views, caused an intense debate on social media about the paparazzi photographing the Kardashian children.

While many Twitter users criticized the celebrity photographers, many were quick to point out that it is Kardashian who drags her daughter into the limelight and has her own network of paparazzi photographers that she uses for publicity.

“If your daughter doesn’t want her picture taken then don’t take her to sit on front rows at a fashion show. Also, that’s how your entire family makes money, from videos and pictures. May want to tell her that now,” writes one Redditor.

“Kim does this on purpose to her own children. She calls the paparazzi and walks them out like accessories. That’s what North will figure out in a few years but it will be too late,” adds another user in a comment.

In a separate tweet, Kardashian, responded to her critics and tried to reassure fans that her daughter wanted to be at the public events with her.

As a mom I’m so grateful that my daughter loves coming with me on my work trips and I am able to bring her and create these memories together along with my mom. pic.twitter.com/jUJTKo09jV

In most parts of the United States, it’s legal to photograph anyone, including children, in public spaces. The one major exception is California, where a law that made it a misdemeanor to photograph the children of celebrities was passed in 2013.

Celebrities have a tense history with the paparazzi over filming their children. A newly-released video showing Prince William berating a photographer for “stalking” his children during a bike ride last year.