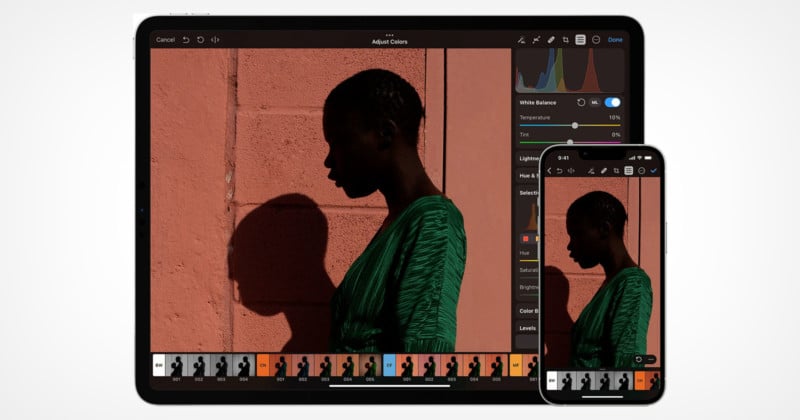 Pixelmator has announced that its photo editing app for iPhone and iPad is switching from a paid upfront model to a subscription model. Pixelmator Photo will now cost $4.99 per month or $23.99 per year.

“This is a decision we’ve been considering (and, to some extent, avoiding) for a good while now and there are a few main reasons why we’re making the move,” the company writes on its blog.

Pixelmator says that because it is made of completely independent developers with no outside funding, the upfront payment method required them to move from major updates and media “buzz” in order to generate signups that kept them paid.

“We do our best to attract as many new users as possible. The rest of the time, the money we make isn’t actually enough to support development costs,” the company explains.

Pixelmator says that it has been trying to keep new signups coming through major updates, but found that the strategy was not sustainable.

“If an update doesn’t do as well as expected or is delayed, you’re in trouble. And eventually, your potential pool of users shrinks to make it necessary to release a paid upgrade that existing users need to pay for, too,” the company continues.

“That’s what we’ve been doing until now and it hasn’t served us badly, but the landscape is changing and, when updates become more regular, there are some pretty big problems with the paid upfront model.”

The paid upfront model results in slower development, poor value for users, no unified purchases across macOS and iPadOS/iOS, and the company found that new users became more important than existing ones, since they are the only users that generate income for the business.

Pixelmator wasn’t happy with these and other issues that stem from the paid upfront model, and after 15 years the business has decided to shift to the subscription model to better balance these issues. The company isn’t pretending there aren’t downsides, though.

“Of course, there are downsides to subscriptions too — one big one, really. It’s more expensive,” the Pixelmator says. “With fewer paid users in a subscription model, the price becomes higher and you lose the users that use your app occasionally, instead focusing on the people who use your app the most.

“It’s a little sad because there are certainly apps that we personally would use only occasionally which went down the subscription route that we don’t subscribe to. So we know the feeling well. But the hope is that there are enough users who use the app regularly and feel that the annual or monthly fee is worth it. It looks like this is the best way to ensure Pixelmator Photo can continue to be developed long into the future, keep growing, and become the best app it can be.”

As mentioned, Pixelmator Photo will now cost $4.99 per month or $23.99 per year. However, existing paid users will receive unlimited access for free. Pixelmator also announced that it would be bringing the iOS and iPadOS app to macOS. The company shared a preview of what that experience will look like (above), and explains that the experience will be a completely native app designed specifically for the Mac. The company plans to ship it late in 2022 or early 2023, and those who subscribe to Pixelmator Photo now will get the Mac version for free.

As a note, Pixelmator Photo is not the same as Pixelmator Pro, the company’s other dedicated photo editor for Macs.