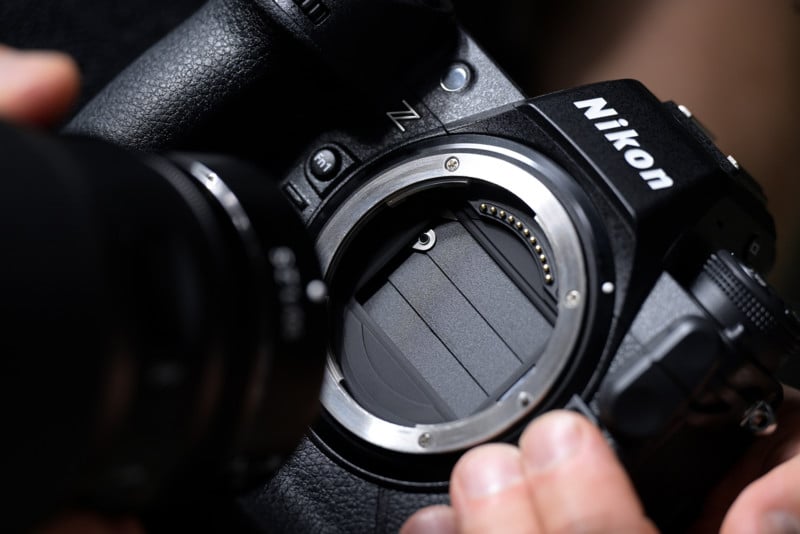 The process of designing a flagship digital camera is a heavily guarded secret. But in a rare exception, some of the key individuals responsible for the development of the Nikon Z9 sat down and explained some of the defining aspects that brought the camera to life.

In 2018, Nikon released the Z7 and Z6 full-frame mirrorless cameras. However, as the professional demand for a mirrorless flagship model increased, it was acknowledged that further improvements to function and performance were needed to meet all the demands of professional users.

“That meant the pressure was on — the development of a true flagship model was of great significance both internally and externally,” Nikon says. “Every single person involved in the Z9’s design and development felt they had a mission to complete.” 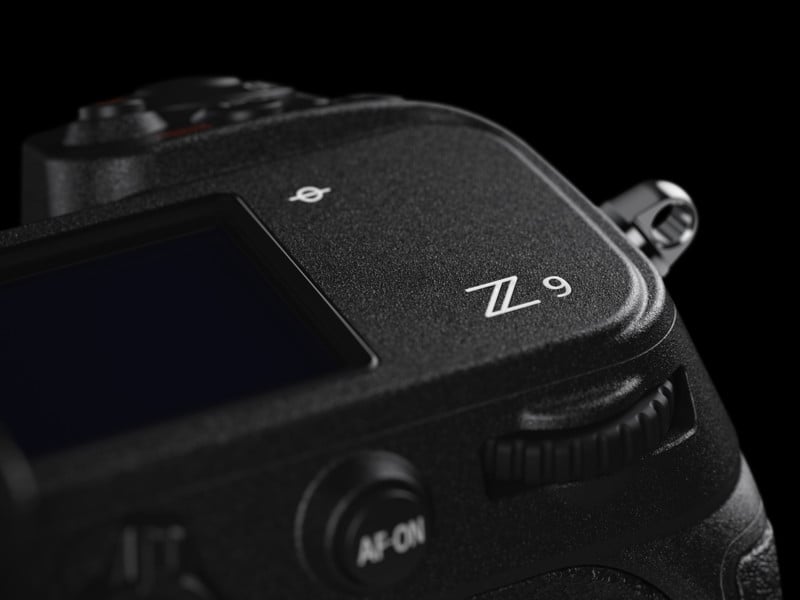 Nikon adds that one of the goals was to surpass the D6, a model that many felt represented the perfect DSLR.

“Indeed, the scale of the challenge and the timings set to develop it resulted in cooperation between Nikon departments on a scale never seen before.”

“To develop a flagship model that would surpass not only the D6 but also all rival models, we knew we would have to start from the very beginning and not allow ourselves to be bound by the premises of conventional technologies,” the company says.

To Nikon, the most difficult aspect of making the Z9 was the consideration of the core specifications that it needed to have. 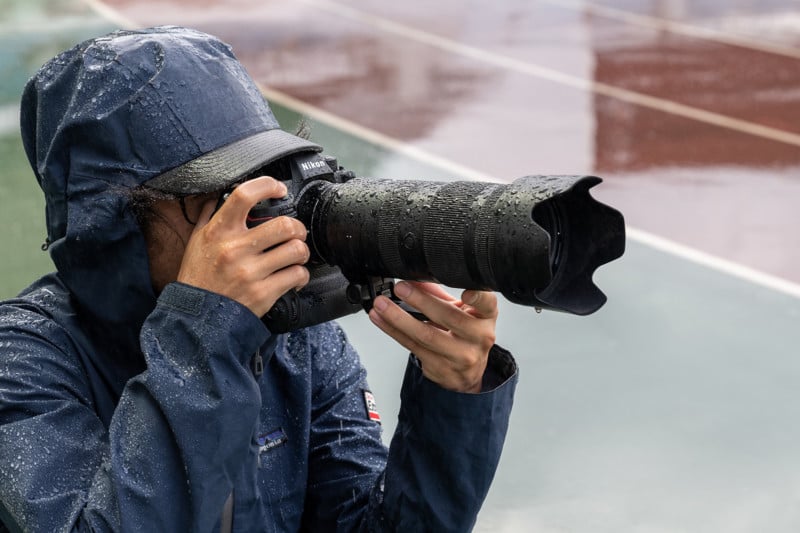 “Building a foundation for the camera took a great deal of time because we started right from the beginning, building even the basic construction from a completely fresh starting point. And the requirements of new image-processing engines and the flagship models are enormous, so we — from day one — had to make some very difficult decisions given the limited development time frame.”

Nikon says that through this process, what remained constant was the belief that it needed to be designed from a user’s perspective, and all specifications and functions that they adopted would need to exceed the expectations of professional photographers — expectations that had grown to considerable heights thanks to Nikon’s competitors.

“To ensure we exceeded expectations of photographers, we needed them to test the product continuously and thoroughly throughout its development. However, due to the COVID-19 pandemic, major sporting events normally used to evaluate camera operations and performance and take test shots were cancelled one after another, making evaluation under real conditions difficult,” Nikon says. 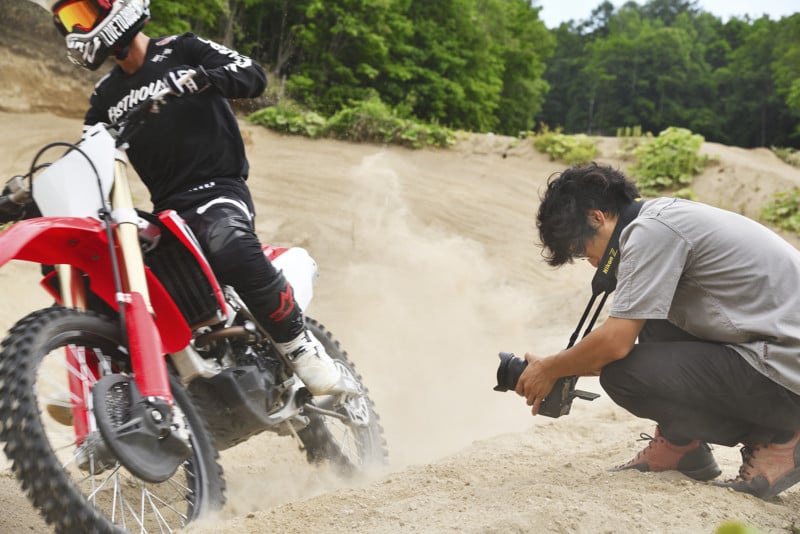 But Nikon did not let a global pandemic stop the development of the Z9, and the company made moves to recreate those lost professional shooting environments.

“In response, we invited university athletes to serve as live models in gymnasiums, skating rinks, and other sports facilities. And we began loaning the camera to photographers at very early stages of product development, so that their feedback could be considered while there was still time for modification and improvement.” 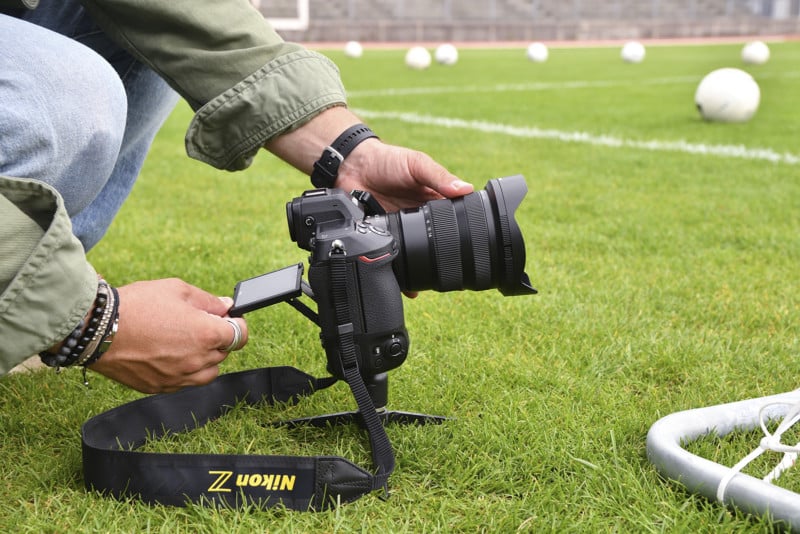 “Even with this in place, achieving the detection of nine different subject types, and simultaneously detecting multiple subjects that require processing of CV, AF calculation and lens driver operation for each shot under the limited time in 20 FPS high-speed continuous shooting, was a struggle,” Nikon reveals.

The company says that every design decision that went into the Z9 was made following extensive consideration for the effect it would have on the camera and how it would be received by photographers.

“An important one was that an electronic viewfinder (EVF), which tracks the intended subject in real-time, would be an absolute must for a professional flagship model. We cooperated across departments to find a solution that achieved the most natural and pleasing viewfinder display,” Nikon explains.

“We surpassed the performance of optical viewfinders (OVF) by encompassing the best of both worlds; the level of performance that would enable the unrestricted display of OVFs, with all the advantages that an EVF presents. Just as we did with the D6, we placed great importance on the way people see, feel and experience the camera. We recognize that there are important factors in design and function that can’t always be measured quantitatively.” 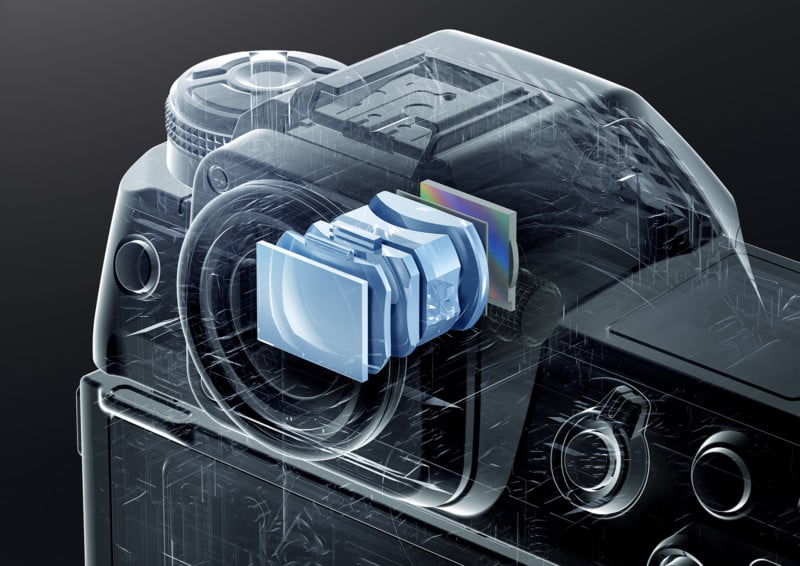 Nikon says that another major point of consternation centered around the rear LCD.

“Once we settled on the Z9 having an integrated vertical grip, we took the decision to equip the camera with a four-axis tilting monitor as we believed this offered users more flexibility when framing their shots. However, we were conscious that tilting monitors have a reputation for being unreliable, so we prioritized reliability from the very start of the development process to ensure ultimate satisfaction.”

“One of the biggest decisions we made was eliminating the mechanical shutter altogether. There was real hesitation about abandoning one of the strengths Nikon has achieved over its history of technological development,” Nikon says.

“But the mechanical shutter was removed from the Z 9 because we were determined to place a greater priority on other features for the user, and because we were ready to usher in a new era for ourselves.”

As part of this, Nikon did equip the camera with a light-shielding curtain unit that enabled long-exposure noise reduction and reduced the risk of dust and foreign materials adhering to the sensor.

“As for shutter sound, while we choose something appropriate for each model, we were extremely particular about the audio data used for the Z9. This is because, since the days of film cameras, we’ve regarded shutter sound as an important aspect of photography; something that makes the shooting experience more enjoyable,” the company adds. 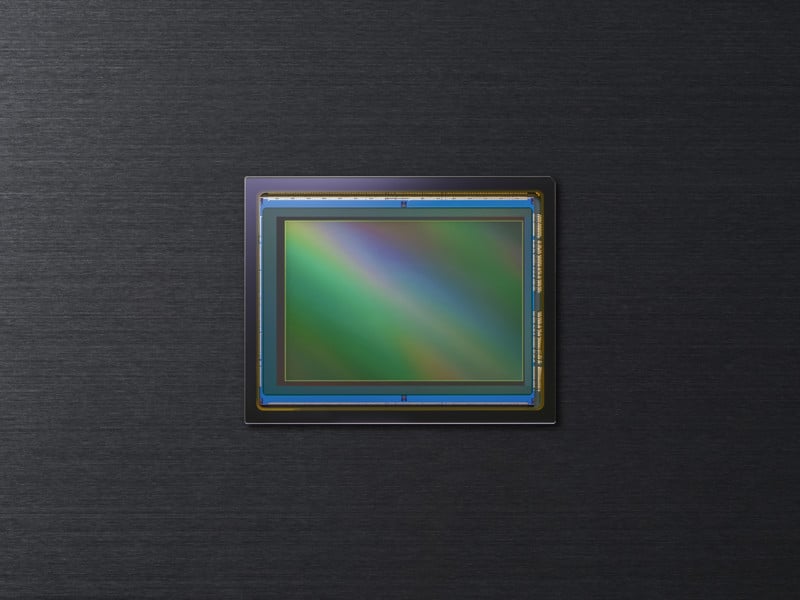 Going with this solid state-like design left the Nikon engineers wondering what sound would be best for the flagship.

“We tried a number of possibilities and decided that the sound data should reproduce the sound of mirror and shutter operations, but then fine-tuned as needed. With early Z9 prototypes, the speaker was positioned near the control panel on the top of the camera,” Nikon explains.

“With actual test shooting, however, we found that this position was not optimal because it was noticeably different from where sound is heard with conventional cameras. It seemed strange for the shutter sound to come from the top of the camera. So, despite being well into camera development, we suddenly moved the speaker to a position at the center of the camera body to better mimic the sound of a conventional mechanical shutter.”

Stepping Up in the Video Department

Nikon says that through the development of the camera, it knew that 8K resolution would be a must.

“We knew that 8K resolution will be the next step in the evolution of video. Nikon had an excellent reputation in terms of photo imaging but we had our work cut out for us to develop a camera that would be the choice of videographers as well,” the company says.

“We believe that this camera, in how it enables the shooting of the highest quality video with the minimum number of people, is a true game changer for professional videographers. It responds to video needs with powerful specifications such as 8K30p in 23-degrees Celcius environments, long-time shooting of up to 125 minutes, 4K 120p that can be taken in full frame, internal recording of HLG and N-Log, and the world’s largest number of nine types of subject detection in video.” 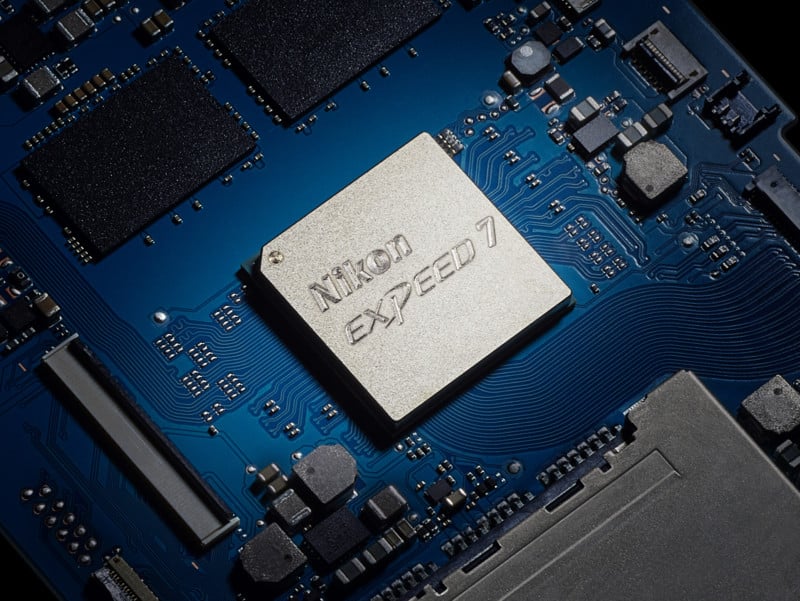 To get the camera to perform with those specifications, Nikon says it knew that heat would have to be managed and developing the way to do this was of primary importance and says that it conducted various various heat-dispersion simulations from the early stages of development.

“We faced the difficulty of equipping the camera with both the image-stabilization (VR) mechanism and means of dispersing heat. For context, dedicated video equipment generally uses cooling fans to disperse heat. As a flagship model, however, the Z9 must offer excellent drip resistance. In consideration of this, we decided it would be impossible to equip the camera with a cooling fan that requires an opening that admits cooler air from the outside,” the company explains. 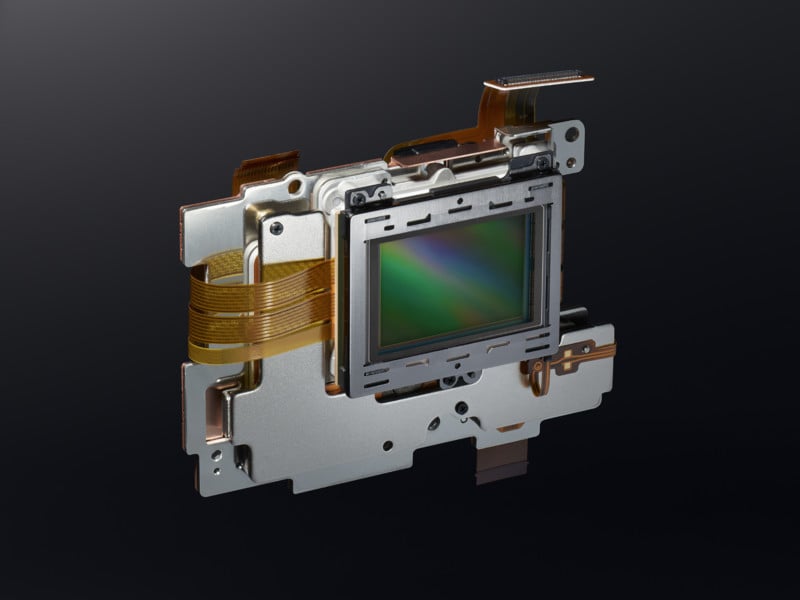 “This resulted in the Z9 being the only model equipped with an integrated vertical grip that offers heat-dispersion performance sufficient for video recording over extended periods of time without using a cooling fan.”

The Z9 Has More to Give

Nikon says that what it has chosen to share here are just a few of the anecdotes from the development cycle of the Z9 and only scratch the surface of the challenges, opportunities, and solutions that were part of the camera’s development. The company says that there were features that it wanted to include in the camera at launch that were considered initially but did not make the production deadline. But not to worry: it plans to add those in with firmware updates that allow the camera to improve over time.

The company has already done this once with a major firmware update that arguably could have constituted an entirely new camera.

“Ultimately, this is only the beginning of the story,” Nikon says.

“The tremendous amount of feedback we’ve received encourages us to push further ahead still. Our mindset is to never be satisfied with things as they are at a particular moment, and our vision is to continue to offer products that exceed user expectations time and again.”