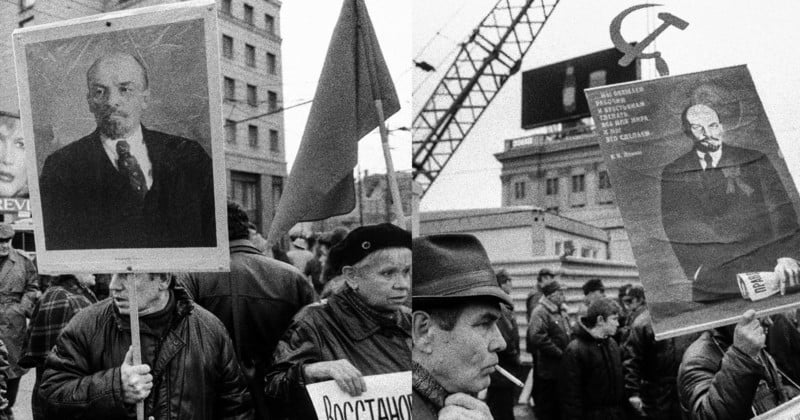 Australian photographer Dean Sewell spent 15 months in Russia after the breakup of the former USSR. When Russia invaded Ukraine, he was suddenly reminded that he still had more than two dozen undeveloped B&W film rolls from 1996 to 1997.


Sewell managed to find the film and get them developed, and the resulting images are an amazing time capsule from the early days of the disintegration of the Soviet Union.

On December 25, 1991, the Soviet flag flew over the Kremlin in Moscow for the last time. Representatives from Soviet republics (Ukraine, Georgia, Belarus, Armenia, Azerbaijan, Kazakhstan, Kyrgyzstan, Moldova, Turkmenistan, Tajikistan, and Uzbekistan) had already declared that they would no longer be part of the Soviet Union. The mighty Soviet Union, once comprised of 15 republics, had fallen.

In 1996, a young 25-year-old Sewell quit his staff photographer position at the Sydney Morning Herald where he started as a cadet press photographer in 1989 to live and work in Russia. He wanted to cover social, political, and environmental issues of the day across Russia and some of the former Soviet satellite states.

“I was interested in the politics and culture of Russia from a relatively young age,” Sewell tells PetaPixel. “I grew up in a working-class family, so my upbringing was very politicized. My father was involved with trade unions here and was aligned with the hard left. My family was anti-imperialist America and followed events surrounding Russia, and I guess this rubbed off a bit.

“I wanted to further my photographic practice, shift from the single image mentality of press photography at the time, and move more into long-form visual narratives.”

Sewell started preparing in 1995 and doing research on a foreign land in the days before the internet was slow and took a whole year.

“At the SMH [Sidney Morning Herald], we had a paper stack, like many newspapers globally, where you could look at foreign newspapers,” explains the photojournalist. “In Australia, I suppose it is fair to say that we looked more towards British mastheads like The Independent and Guardian, but perhaps we had the NYT there, possibly the New Yorker.

“I think I had saved around $25,000, give or take. Many wiser photographers here were buying houses at the time when such a dream was possible. Instead, I invested all my money into my photography.

“I calculated that at the time, that figure might have seen me through the good part of a year if I was smart without having to beg for work. As it turned out, I was one of an extremely small minority of foreign photographers living in Moscow at the time, and there was a lot of freelance work for me, given most of the world’s major mastheads still had bureaus there but few had staff photographers.

“Other foreign photojournalists were often parachuted in for big assignments, particularly those covering the war in Chechnya, which was in full swing.”

Before 1996, Sewell worked primarily as a general press photographer in Australia. He did, however, in his effort to try his hand at more in-depth, narrative-based photojournalism work in Latin America. He traveled there twice, spending around six months in total working on personal stories in Peru, Bolivia, Argentina, Equator, and Cuba.

“I was extremely naive back then, but I believed the work I produced there was personal preparation before heading to Russia,” admits Sewell.

Most of the work is from Moscow, but St. Petersburg was also covered as well as cities across Siberia or south of Moscow. Other cities were Grozny in Chechnya, Samarkand in Uzbekistan, and Tbilisi in Georgia.

When Sewell hit the ground in Moscow, it was like walking through a Dostoevsky novel. The country was plagued by poor finances, with many shops out of business. But there was hope for the new democracy and press freedoms.

Negatives Sent Out, Never to be Seen Again

“A lot of the work I was commissioned for was done ad hoc,” remembers the Australian photographer. “I would liaise with a journalist from some masthead to produce a story, and they would pay me immediately in cash.

“Sending images out of Russia at the time was expensive. My only means cost me $200 per image, so some papers would only want two or three. Sometimes they wanted much more and so had to courier the negatives.

“Being pre-internet, tracking those negatives was hard, and sometimes I barely talked to editors. I never found a print joint there either, though I never really considered it. There was only one hole-in-the-wall type photo development place I knew, and I used them all the time.”

None of the negatives Sewell sent out for publication were ever returned to him. But it was a good market for his work. Many western and European bureaus there only had writers with no staff photographers. It was a lot cheaper hiring Sewell than flying in a photographer.

One of the photojournalist’s favorite stories produced from his time in Russia was about some indigenous reindeer herders in Siberia. It went to the heart of Soviet oil extraction and their primitive techniques. With the collapse of the Soviet Union, the upkeep of the infrastructure was not possible, resulting in the polluting of the landscape with oil which killed the grass essential for their reindeer herds, thus destroying their age-old culture and way of life.

“That work was done for an Australian paper – The Melbourne Age,” says the documentarian, who also writes feature articles. “Their intent with the story was to go big with it, so they demanded that I courier the negatives back.

“Well, the negatives made it back to the newspaper only for someone to lose the negatives, so I lost the entire story. I was livid, you can be assured.”

Sewell worked with a journalist who wrote an article on the mafia’s influence on Russian culture and how they risked putting such important cultural institutions in harm’s way. The Bolshoi was not happy with the direction of the article. This led to his being denied access to the premier Bolshoi Ballet. However, he managed to secure backstage access to the Stanislavsky and Nemirovich-Danchenko Theatre.

When Sewell looks at his Russia photos now, he feels that there is a bit of a Josef Koudelka feel in the imagery.

The Photographer’s Camera Gear in Moscow

“My Nikon F4 packed it in years ago, and on return to Australia, I upgraded to the F5s,” says Sewell. “They have subsequently packed it in, but my FM2s are still operational. Purely mechanical, no bullsh*t.

Developing Film Rolls from 26 Years Ago

“On my return to Australia in 1997, I brought back a bag of unprocessed film,” says Sewell. “Circumstance, work, and life seemed to conspire, and for the past 26 years, those rolls remained tucked away deep within my archive.

“However, with the help of my colleagues within Oculi, [a collective of award-winning photographers from Australia], it was decided that it was time to release those images from their latent tombs.”

A film developer was mixed at twice the normal strength, and the developing time was also increased for the hand development of the rolls.

Whenever the thought of developing the rolls ran through Sewell’s mind, he wondered if there would be anything on them, given that they were poorly stored in humid conditions. In the video below, you can see water seeping into the room where the film was merely dumped in a plastic bag.

Sewell tells us that developing the films was nerve-racking.

“I really didn’t hold out much hope,” he says. “I thought they would have become stuck in the canisters, either melted or full of mold or just eaten away by light seepage or something. Secretly, I thought that it would be a complete failure, so I was quite surprised, particularly by their state.”

The developed films showed good detail and definition, albeit a little grainy.

“Over the years, Dean’s Russia films became the stuff of lore to those close to him,” fellow photographer, Canadian David Maurice Smith, who is based in Australia, tells PetaPixel. “Many would have never been able to wait two weeks to develop film, let alone decades. That’s Dean, though.

“It is very important to acknowledge the momentum that Oculi [co-founded by Sewell in 2001] members Alana Holmberg, Aishah Kenton, and Sean Davey created in getting this film developed. Without them, the rolls would still be under a bed somewhere threatened by flood, fire, mold, or God knows what else. Sean took on the role of actually developing the film, which came with a great deal of responsibility, and he nailed it.”

At the time, Sewell’s preferred film choice was Agfa Pan 400. He also dabbled in Ilford FP4 occasionally but felt more secure with a faster emulsion.

In the past, Sewell preferred Agfa Rodinal for developing the Agfa Pan 400, which he says could be easily push-processed (for shooting at a higher ISO).

Read Also: This Guy Got a 100-Year-Old Bottle of Film Developer and Tried it Out

When he left Australia, the newspaper was only starting to shift into color, so B&W film was still pretty much the standard. Also, he had still not taken the leap into color emulsions.

The next step has been scanning the film on a Pakon film scanner at a resolution of 2,000dpi, producing 15MB scans.

“From a digital perspective, I think I will need to rescan all of this work, later on, something with a much higher resolution,” says the photographer. “We developed all of this work and scanned it to meet the deadlines of a major group exhibition of our photographic collective Oculi.

“It is a large show with one week left currently sitting in a major Australian regional art gallery, so time was the essence.”

A Focus on Social and Environmental Issues

Sewell’s work since his return has been grounded in more long-form photojournalism/documentary projects focused on social and environmental issues across Australia and regionally. He covered Timor Leste’s vote for independence and its violent passage (1999), the 2004 earthquake and its subsequent tsunami in Sumatra, Indonesia, Australian bushfires, droughts, floods, and climate-related and Australian indigenous social and political issues.

Also, the toll placed on the Australian environment by extraction industries, the state of the Great Barrier Reef, river systems, old-growth logging, and ocean plastics.

Sewell, a World Press Photo award winner in 2000, 2002, and 2005, is discussing with his fellow colleagues within Oculi, Australia’s longest-running and most decorated photographic collective. They are tossing around ideas about a book project and how that might look.

It may be a popular fundraising strategy these days, but Sewell is personally against using a crowdfunding service such as GoFundMe to finance future projects from his Russia work.

“I have a real personal problem with expecting others to contribute to anything I’ve done and would feel somewhat embarrassed to do so,” he says. “I suspect there would be far more worthy causes than my own out there for people to fund.”

“We were able to identify around 33 rolls of film from my time in Russia,” concludes Sewell. “However, there could be a further 20 or so. In rediscovering these rolls, what we did unearth was a further 70 odd rolls, 20 B&W and around 50 of color.

“So, there could remain other work from Russia to develop.”

You can see more of Dean Sewell’s work on Instagram.