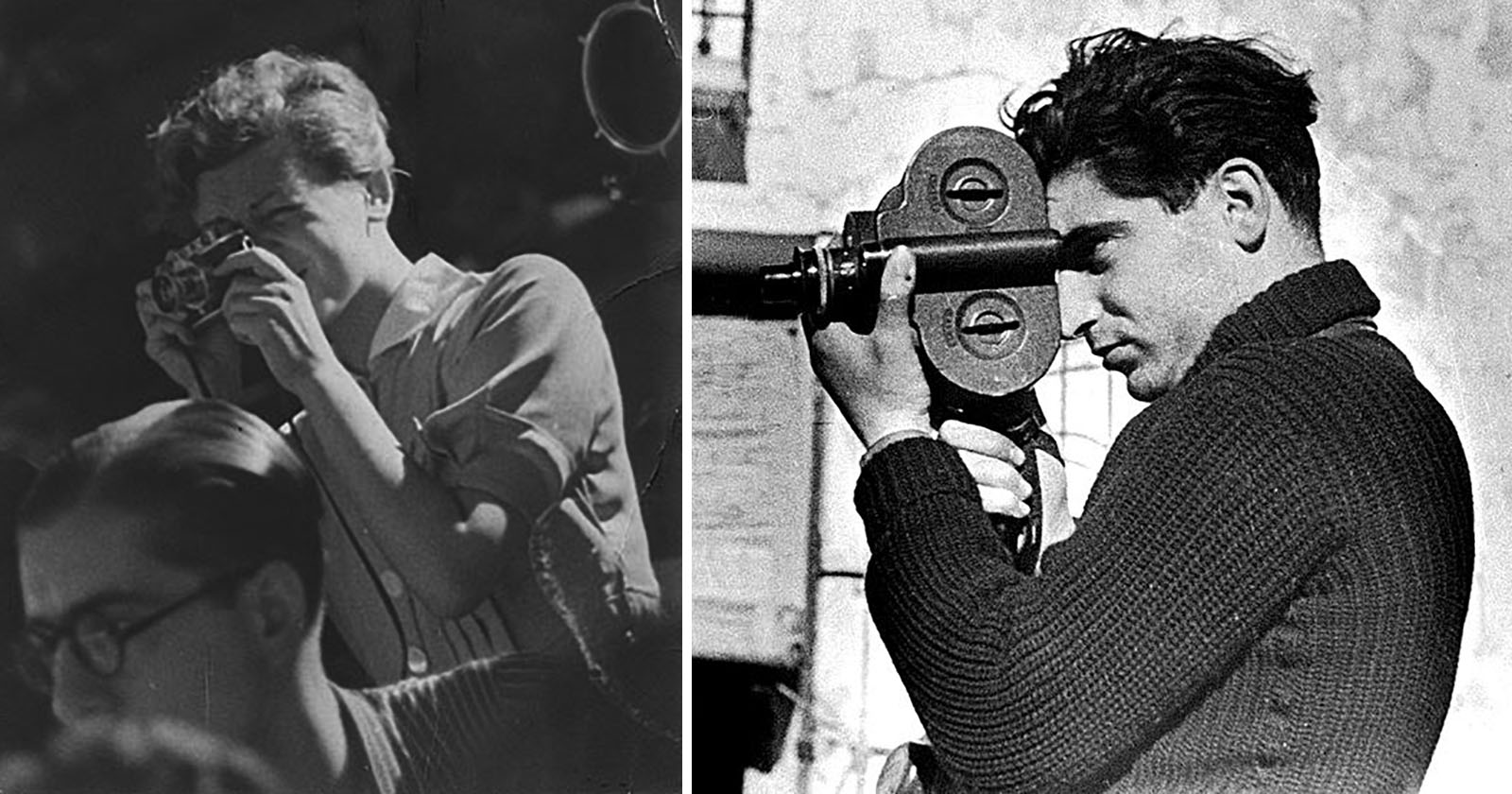 Gerta Pohorylle was born in 1910 in the German state of Stuttgart to a middle-class Jewish Galician family. She attended a Swiss boarding school, where she learned English and French and grew up receiving a secular education. In spite of her bourgeois origins, she became part of socialist and labor movements while still very young.


At the age of 19, she and her family moved to Leipzig, just before the affirmation of the German Nazi party. Gerta immediately showed her dislike and opposition to the regime, joining leftist groups and taking an active part in anti-Nazi propaganda activities.

In 1933, she was arrested and detained, charged with handing out flyers. Gerta was released after 17 days and decided — or perhaps her family decided for her — to leave Nazi Germany. She went to Italy for a short period and eventually moved to Paris.

The Legend of Robert Capa

Life was not easy in Paris. Gerta lived with some friends and held several jobs, including waitress, au pair girl, and model. In those days, Paris was the center of a vibrant artistic, literary and political life, and many of the young intellectuals who visited the cafes in the center of the town were immigrants. Gerta’s proximity to the left-wing movements helped solidify her anti-fascist views, despite the influence of Nazi Germany beginning to feel heavy all over Europe.

In September 1935, Gerta was attending a shoot with one of her friends when she met a young Hungarian photographer. His name was Endre Friedmann, but he referred to himself as André. Like herself, André was a Jewish refugee fleeing the growing Nazi threat in Berlin.

André and Gerta soon fell in love. They started living together, and André taught Gerta everything he knew about photography. With his help, she got a factotum job in the Anglo agency Alliance. It was there that Gerta learned about photographic and print processes, and she began to become interested in photojournalism, eventually working as a picture editor for the same agency.

In 1936, Gerta received her first photojournalist credential, but André was struggling to find clients for his photo work. They were both determined to find their place in the photojournalism industry. In order to overcome the increasing political intolerance prevailing in Europe and get access to the lucrative American market, they decided to get rid of their Jewish surnames and started to sell their pictures using the fictional name “Robert Capa.”

The deal was simple: Gerda would sell the pictures by Capa, an American, rich, famous, and elusive photographer, temporarily living in Europe, who only communicated through his assistant, André.

Using this pseudonym, Gerta and André covered the events surrounding the coming to power of France’s Popular Front in 1930. Their secret was soon revealed and, still working together, André kept for himself the artist name Robert Capa, while Gerta adopted the professional name Gerda Taro.

In 1936, the Spanish Civil War broke out, and Gerta and André decided to move there to closely follow the events. Gerta soon became very emotionally involved in the Spanish Civil War, empathizing with the suffering Spanish people and cementing her hate toward the fascist ideology of the rebellion, openly supported by the German regime.

They made several trips to Spain, documenting the Republican soldiers’ departure to the front and the refugees moving from Malaga to Almeira. Next, they covered the war events in Aragon and Córdoba.

Although Gerta mostly used Rollei cameras and André preferred Leica, they often exchanged their gear — making the pictures indistinguishable based on camera format — and sold the images under the brand “Capa-Taro.”

Gerta soon began working more independently. She became publicly connected to a circle of anti-fascist European intellectuals and begun to publish her work, under the “Photo Taro” label, for magazines such as Life, Regards, and Illustrated London News.

In July 1937, while reporting on the Valencia bombing, she shot the pictures which are her most celebrated: the images depict the inside of the morgue where dead bodies from the recent attack lay, as well as the crowd outside filled with desperate people looking for news of their friends and relatives.

A few days later, André went to Paris, France, to discuss business with some photography agencies while Gerta moved to Brunete, Spain, where Franco’s troops were preparing to retake the small town from the Republican forces. The battle turned against the Republicans, and Gerta was trapped in the trenches, where she kept taking photographs until she ran out of film. She then joined the Republican army retreat headed toward Madrid, traveling onboard a car full of injured soldiers. On the way, the convoy was attacked by German planes supporting Franco’s troops.

In the midst of the attack, a tank lost control and ended up against the car Gerta was in. The photographer fell to the ground and was hit by the tank. Gerta was taken to the hospital, but it was immediately clear that her wounds were too serious. After a brief surgical procedure, the doctor asked to give her all the necessary morphine to relieve the pain in her last hours. The next morning, Gerta passed away at the age of 26.

A funeral was held a few days after in Paris and was attended by thousands of people. News of Gerda Taro’s death spread all over the world and caused a great response, particularly in France where the public opinion was particularly sympathetic toward the anti-fascist figure. And because of her dedicated reporting of the Republican effort during the Spanish Civil War, she was declared an anti-fascist martyr. She was buried in the Père Lachaise Cemetery in Paris on August 1st, 1937, the day that would have been her 27th birthday.

After Taro’s death, Capa kept shooting pictures of the Spanish Civil War. Another photographer, David “Chim” Seymour, who met Capa and Taro in Paris, was working in Spain, documenting the exodus of the Republican Spanish refugees heading to Mexico. They both sent negatives to Paris, where Imre “Csiki” Weisse, Robert Capa’s assistant, cataloged and kept them in special cardboard boxes.

In October 1939, while German troops were moving to Paris, Capa was forced to flee to New York, leaving all his gear and negatives in his lab in Paris. From that point, Capa’s negatives of the Spanish Civil War were missing, and so was much of the memory of Gerda Taro.

In 1975, in a letter to Robert Capa’s brother Cornell, Imre Weisse remembered the Spanish War negatives. He wrote:

In 1939, while German forces were approaching Paris, I put all Bob’s negatives in a bag, then took my bicycle heading to Bordeaux, hoping to find a boat to Mexico and put the negatives on it. On my way to Bordeaux, I met a Chilean who promised me to take in custody the bag and deliver it to the Chilean embassy.

The bag with the negatives eventually made its way into General Francisco Aguilar González’s hands. At the time, González was a Mexican ambassador to the Vichy government in France. González then brought back it to Mexico with him when he returned.

Cornell made countless attempts to trace the negatives but with no luck. The negatives finally reappeared in 1995 when Mexican film producer Benjamin Traver inherited them from an aunt who was a close friend of General González’s. Traver contacted New York’s Queens College professor Jerald R. Green to ask for advice on how to preserve the negatives and eventually make them available to the public. Green was also a close friend of Cornell Capa and informed him about the letter.

In 2003, during the preparation of an exhibition dedicated to Capa and Taro, museum curator Brian Wallis contacted Traver asking to return the negatives. Traver refused. He knew the negatives belonged to Capa and believed the Capa Foundation should take possession of them. But he also knew they represented one of the most important documentations of the Spanish Civil War.

It was only in 2007 that an independent curator and director living in Mexico City, Trisha Ziff, convinced Traver to pass the boxes to the Capa’s International Center of Photography in New York, which had more resources to make them available to the world.

The rediscovery of the Mexican suitcase shed new light not only on the events of the Spanish Civil War but also on the personal life and work of Gerda Taro. She was not just Robert Capa’s partner: on some occasions, she actually was Robert Capa. She was a figure who was partially forgotten about over almost 70 years. Taro’s family lost their lives during the holocaust and Capa met his death in 1954, so there was no one else to testify to her bravery in shooting pictures in extremely dangerous situations, as well as her capacity to empathize with the suffering Spanish people.

Some of the pictures originally attributed to Robert Capa were later discovered to be Taro’s. The images in the Mexican suitcase showed her innovative way of working close to the soldiers in the trenches rather than in the offices where strategic decisions were made. But they also showed how her work, with the same relevance as the work of her more celebrated lover and colleague, had made a huge contribution to the definition of the role of the modern war photographer and photojournalist.

About the author: Manuel Sechi is an Italian photographer living and working in London. His work is mainly focused on documenting the urban environment and its regularly published on his website. Manuel is also an active contributor for The Black Frame magazine. You can follow it on Facebook and Twitter.