NanoAvionics sent a satellite into space with a selfie stick attached to a GoPro, which then transmitted back the world’s first spacecraft selfie in 4K.

A GoPro Hero 7 was used to take the stunning images of the company’s MP42 microsatellite flying 342 miles above Australia’s Coral Sea and Great Barrier Reef.

Aside from the stunning imagery of the world’s largest coral reef system, which stretches for 133,00 square miles off the coast of Queensland, Australia. The photos also help the Lithuanian company test and verify the operation of systems on the satellite itself. 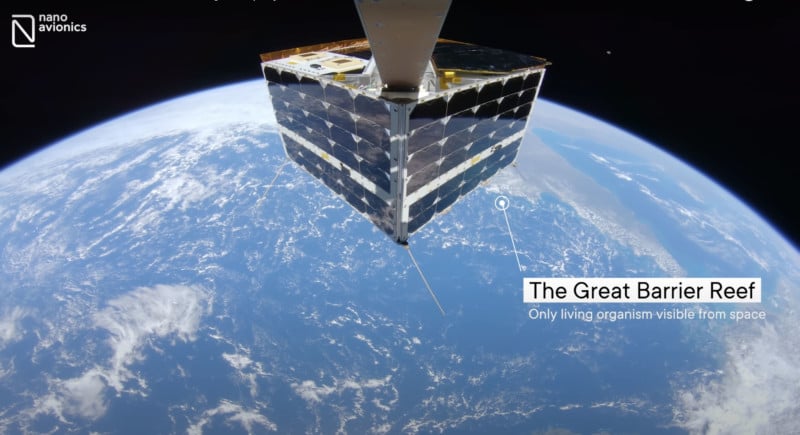 “When the satellite is observing itself, in some cases that might be very valuable,” explains NanoAvioncs cofounder and CEO Bytenis Buzas.

“Being able to access live images and videos of the satellite is useful to visually confirm the deployment of antennas and other deployable structures and for ongoing fault detection.

“Comparing selfie images over time can also enable the detection of visual clues about possible degradation of materials or micro-meteorite impacts,” says the company in a press release.

Mounting a GoPro camera on a satellite is not the standard operating procedure for a space mission, because most equipment that goes to space needs to be “hardened.” This is a process to protect gear from solar radiation that has the potential to knock out delicate electronic equipment. But in this case, Buzas, 36, explains that it was something of a necessity.

“The timeframe was too short to get space-grade cameras,” he explains.

However, the company had tested GoPro cameras for stratospheric flights before and thought it might work for this particular mission, which was primarily geared towards testing how well the company’s new payload controller could handle the generation and transmission of large datasets, like the kind produced by high-resolution cameras. There is an element of risk when sending a GoPro into space because the sun is particularly active at the moment, a non-hardened piece of equipment could be susceptible to a “bullet.”

“This is a matter of statistics,” Buzas tells Forbes. “If that (bullet) particle from the sun is either going to hit a certain transistor on board or not.”

And it wasn’t as simple as just fastening a GoPro to the spacecraft. The hardware had to be stripped down to accommodate space requirements on the satellite, and then the camera had to be interfaced with the payload controller and software.

“Photos and videos of satellites circling our planet could draw more attention and help more people and organizations to realize the societal, economic, educational, and environmental benefits that satellites provide,” says the company.

“It could also inspire more people to take up careers in the rapidly growing space industry.”

Image credits: All photos by NanoAvionics.