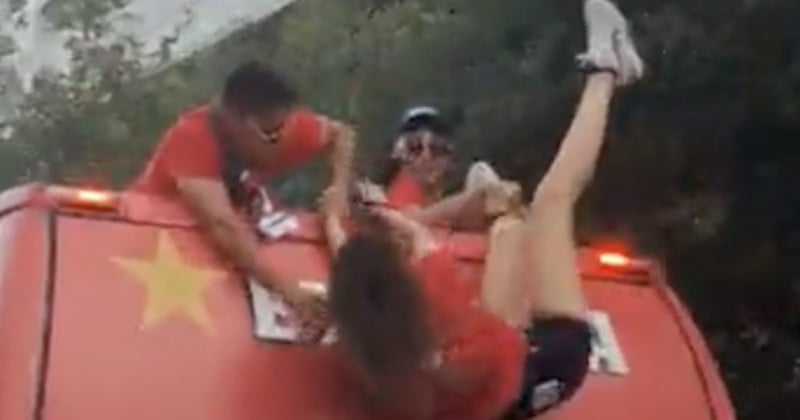 Sports photographer Nuri Margui was on assignment covering a soccer team’s promotion when she fell off the open-top bus they were parading on.

Margui was knocked off balance and had to be saved by the soccer players after the bus had driven under a low-hanging tree which may have been what pushed her off the back of the bus.

Girona FC, based near Barcelona, was celebrating promotion to Spain’s La Liga, along with Girona basketball team who were also promoted to Spain’s top-tier Liga ACB, when the terrifying incident happened in front of jubilant fans.

One of the Girona FC players, Arnau Martinez, held on to Margui’s left ankle and right wrist for dear life as fellow teammate Ramon Terrats and Gabri rushed to pull the stricken photographer back to safety.

Margui, who never let go of her camera the entire time, was dangling from the top of the double-decker bus for a few seconds and was extremely fortunate to avoid serious injury by not falling 14 feet to the concrete.

Conscious she was in grave danger, police could be seen rushing up to the back of the bus to try to cushion her fall, should she have plunged to the tarmac below, with other vehicles close behind. Fortunately, the heroic soccer players were able to hold onto her and pull her back on board unharmed.

Margui posted footage of the incident on her Instagram page with the caption “Whatever happens, don’t let go of your camera.”

Margui is the official photographer for Girona FC and posted a series of images of herself among the wild celebrations, including one where she is taking a group photo of the side and even bravely passing her camera to one of the players across a balcony.

Girona FC is back in Spain’s top league, La Liga, after sealing promotion with a 3-1 away victory against Tenerife with Martinez, who plays in central defense, even getting on the scoresheet.

While this time it was the photographer that needed saving, last month PetaPixel reported that a photographer came to the aid of a boxer who was punched out of the ring and prevented the fallen fighter from doing any further damage.