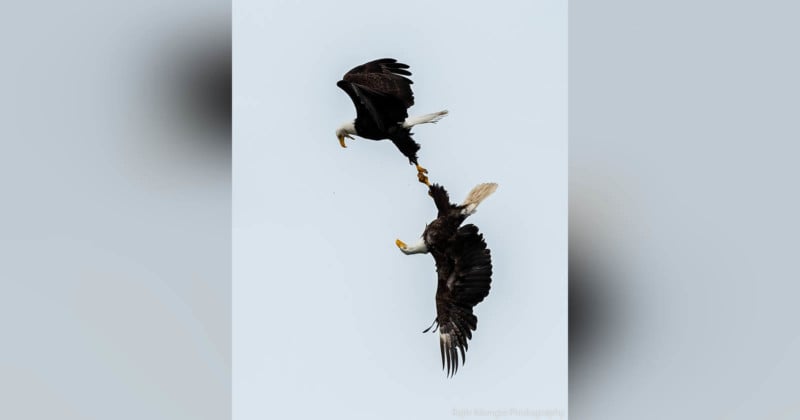 A wildlife photographer has captured an incredible shot of two bald eagles locking talons high in the sky. He had been dreaming of this photo for years before it finally materialized before his lens.


Rajiv Mongia, who lives in the Portland area and works in tech, shot the photo during a workshop last weekend with wildlife photographer Mark Smith.

“I found it amazing to try to understand the behavior of wildlife to try to catch that special ‘moment’ that one sees in the photographs of amazing professionals,” Mongia tells PetaPixel. “I started to practice at that point and quickly learned how much planning, patience, knowing the technical skills (light triangle, etc.) and shear luck is involved in getting the ‘right shot’.”

Turning to photography during the COVID-19 pandemic to recharge, Mongia became interested specifically in capturing the behavior of birds of prey such as bald eagles.

“In the Pacific Northwest, it is amazing to see how bald eagles have once again become common in the skies,” the photographer says. “I have gotten a number of wonderful pictures of eagles perched and even caught some nice photos of eagles grabbing ducks/sea birds, but I have never really been able to get nice pictures of them interacting with each other.

“I had seen many times on the internet eagles either locked in combat or flying while locking talons. I just never knew where and when to be able to catch such an image.”

“He has the most epic shots of eagles and I was hoping I could learn skills by taking his workshop in Washington,” Mongia says. “I arrived there this past weekend with my trusted Nikon D850, my Nikon 600mm f/4 lens, and a sturdy tripod.”

“The scene was crazy at that location — there were 20-30 eagles, 10-20 great blue herons, some crows, and some gulls — all flying around trying to get the fish at this spot. The action was constant — and there we all were at the workshop, firing away.

“Things were happening so fast that you don’t know for sure what you caught and you don’t have time to review your images as you go since every time you looked up there was another eagle flying in from a different direction. After about 4 hours and about 5,000 pictures, I called it a day.”

It was only after reviewing his thousands of photos at home that Mongia realized he had nailed the shot he had been after.

“I get home that evening and start doing my rapid pre-sort of photos to see if I indeed got something different. There was one part where one eagle grabbed another and tossed it into the water. Dang, missed that one. Another where there was action between two eagles — Ugh, missed focus on that one.

“Then, I run across this picture. I had to blink my eyes for a second. Yes, it was a bit far away (I had to crop quite a bit), but the action was perfect — two eagles locked talon and talon each out-stretched. One with its mouth open in a cry and the other focused in on the first one. Decent focus. I just cleaned up a bit of the exposure in Lightroom, a bit of Denoise AI from Topaz, and voila! One of the photos I have been hoping to someday be able to capture.” 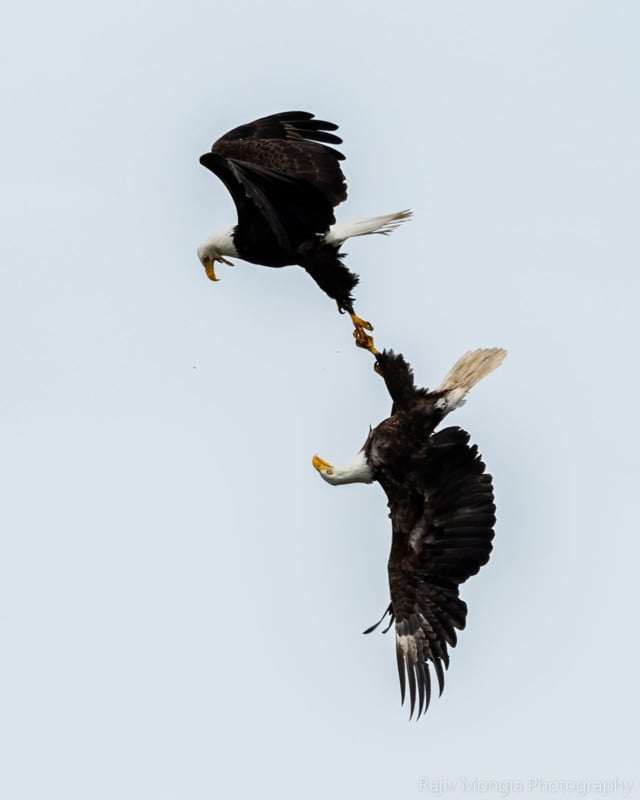 Not Mating but Fighting

Some online viewers have suggested that the bald eagles in Mongia’s photo were engaging in the bird’s unusual mating ritual.

Smith, however, says that was not the case in this particular instance.

“This is a very common misconception,” Smith says. “Everyone thinks just because they lock talons it’s a mating ritual. In this situation, it’s a territorial dispute over food. It’s just how eagles do pretty much everything. Fighting and courting.”

You can find more of Mongia’s work on his Instagram.