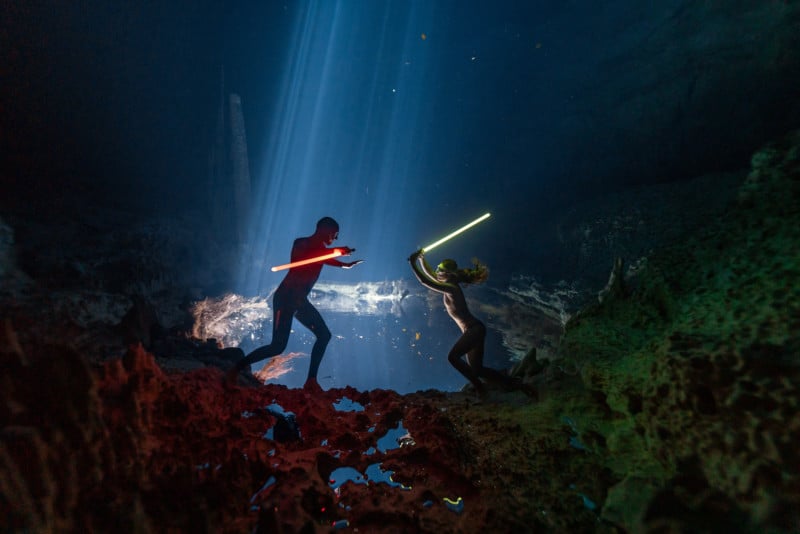 Photographer Daan Verhoeven worked together with two professional freedivers to create an underwater Star Wars themed shoot to celebrate May the Fourth.

Verhoeven, from the Netherlands but currently lives in the United Kingdom, is also a freediver and has been since 2004. He became deeply involved in the community of freedivers and not only took part in competitions but also photographed them. He has photographed almost every AIDA freediving world championship since 2012 and has personally witnessed and documented the setting of multiple world records.

Taking Star Wars Under the Waves

His latest project came up as an idea with friend, professional freediver, and huge Star Wars fan Matthieu Duvault.

“I was about to go visit him in Mexico and we were talking about doing a Star War-themed shoot and how we could implement lightsabers. Matt came up with an ingenious way to make them in a way that they could not only function underwater but would also have different color lights. He wanted to portray the dark side, so it made sense for him to have the red saber, and his wife Kiki is the kindest person you’ll ever meet, so obviously she’d wield the green one.” 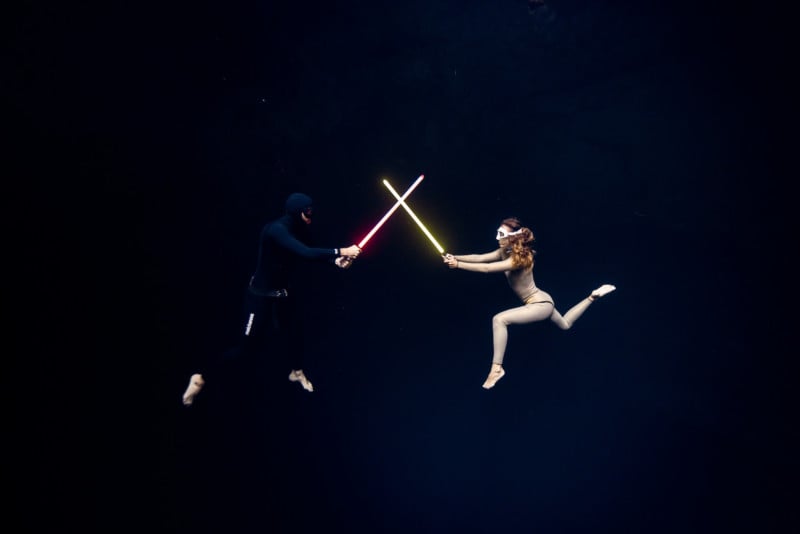 The shoot combined the passions of all three by bringing photography and a love of Star Wars under the waves where all three are experienced freedivers.

“Freediving makes more sense for this shoot because of several reasons,” Verhoeven explains. “Primarily it makes the logistics easier, as you don’t have to lug heavy tanks through the jungle, and you can come up for air and discuss your next shot together. 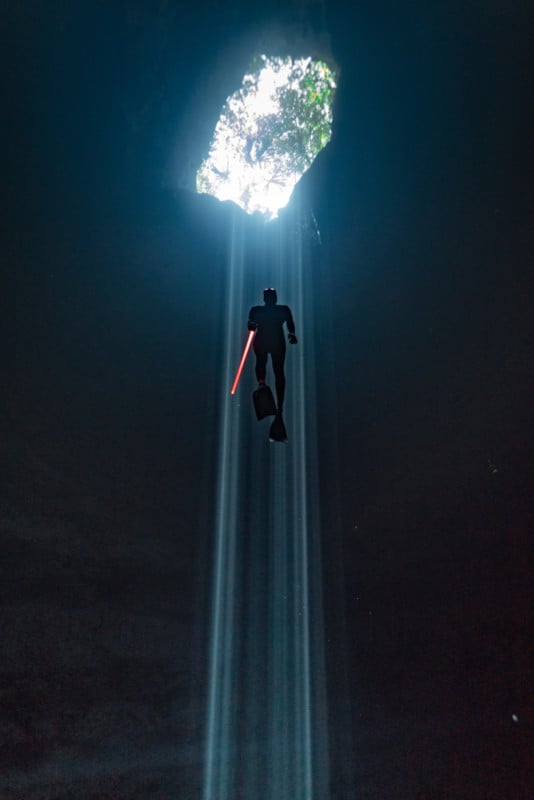 “Also, you avoid having bubbles in the photo — I feel bubbles would have broken the spell a bit. And it’s easier for me to move and position myself without scuba gear — you have to be quite careful in these cenotes, as they are limestone rock and contain very precious and delicate stalactites.”

Making the Idea a Reality

For Verhoeven, the most challenging part of the shoot wasn’t the diving portion, but getting to their chosen location.

“The biggest challenge was the cenote itself. These natural sinkholes are often in the middle of the jungle, so getting there was a tricky hike, and then making sure that we didn’t touch the stalactites was a top priority. You can see how magnificent they are in the background — that took thousands of years to form,” he explains. 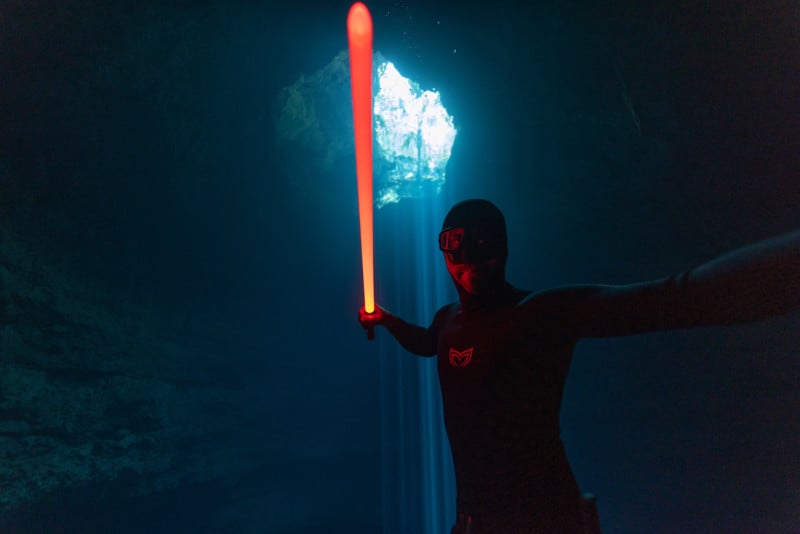 “The other challenge was the sun; we wanted those beautiful light shafts, but it was a cloudy day, so we’d have to wait for the sun to break through. And then the deep stuff was quite deep, so there was not much light down there — besides the saber — and we both needed safety divers to look out for us. Luckily, both our wives are not only great models, but also very good freedivers, so we were in good hands.” 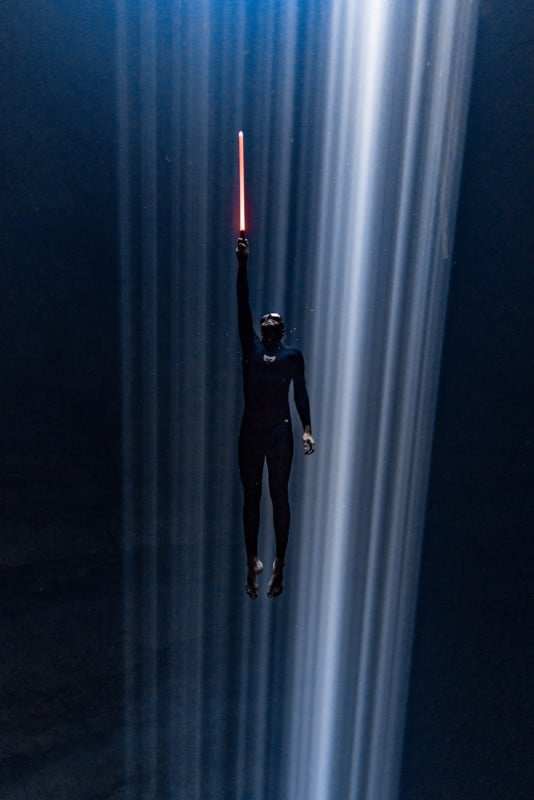 The time between each shot was swift.

“Once we found a good spot where both Matt and Kiki could stand, I would dive first and get in position, then they would dive, get in position and strike a few poses, and then they’d surface and I’d come after them.”

Verhoeven explains that some of the photos were captured as shallow as between seven and 15 feet underwater. But they did venture deeper, as far down as about 90 feet.

“I don’t think any of [the shallower] dives were more than a minute and a half, max. The deeper ones took longer, as you have to swim all the way down and back up, so those were about two minutes.” 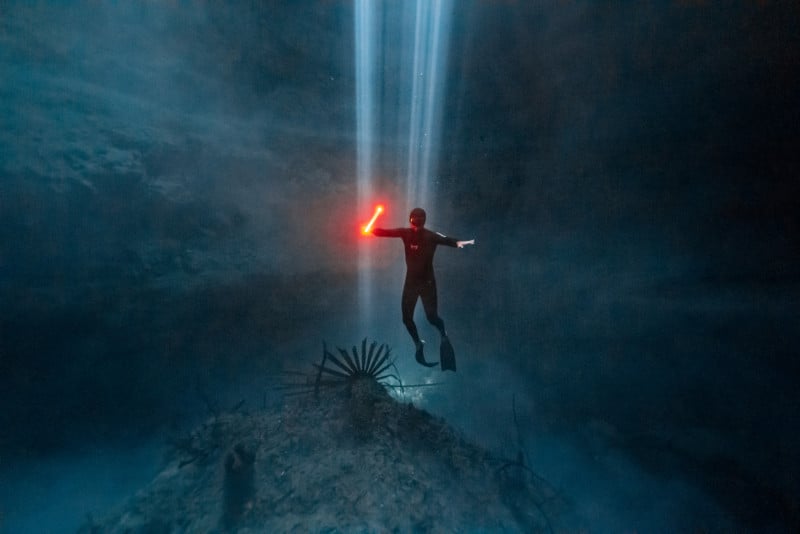 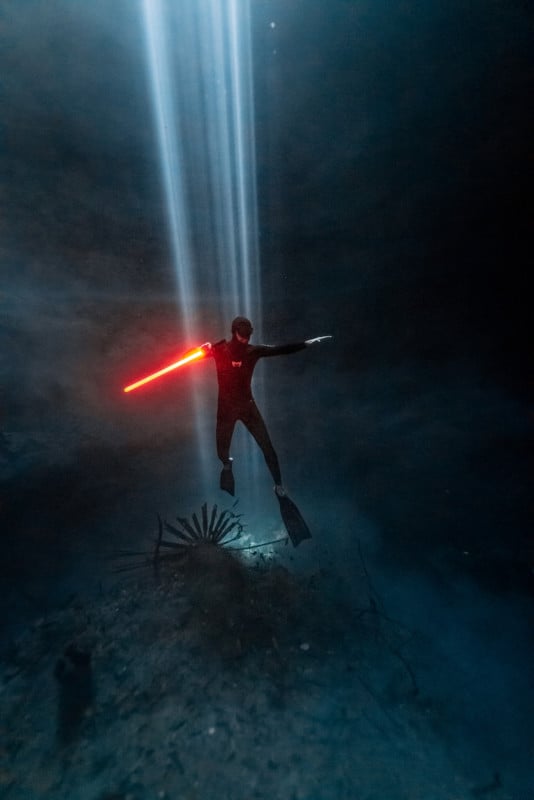 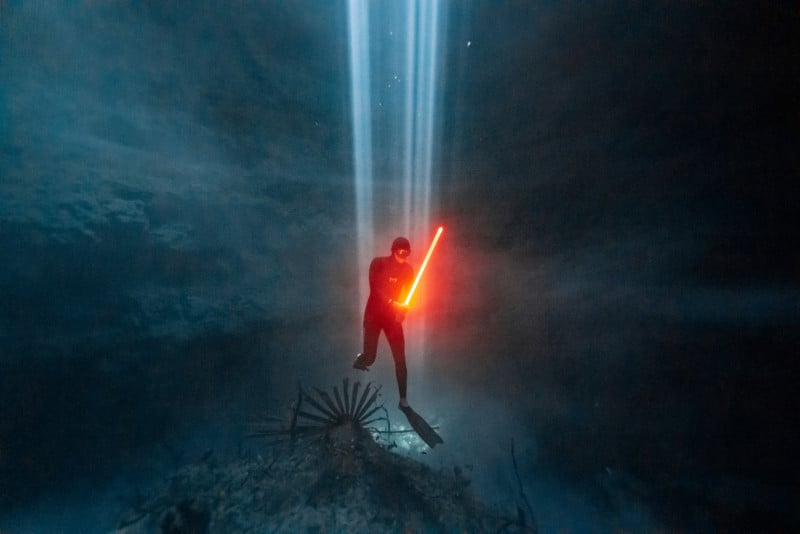 To take the photos, Verhoeven relied on a Canon R5, a Sigma 14mm f/1.8, and a Nauticam underwater housing. He says he likes this particular underwater housing because of the handle and haptic feedback it gives him, plus he’s never had issues with leaking.

“I picked the Canon R5 because at the time it was the only camera that could do high-resolution images and good quality video. I get hired for both photography and for movies, sometimes on the same job, so I need a camera that can do both. My previous camera was the Sony Alpha 7R II and I loved that sensor, but it was a bit too slow for sports like freediving, and the video was only 8-bit, so I switched,” he says.

“Of course, almost immediately after that Sony announced the Alpha 1, which seems to have none of the overheating issues that plague the R5, but I still like the camera. I used it in combination with the Sigma 14mm f/1.8 at f/2.2; that lens on my Canon sometimes gets too unreliable focusing wide open, so I stopped it down a bit,” he adds. 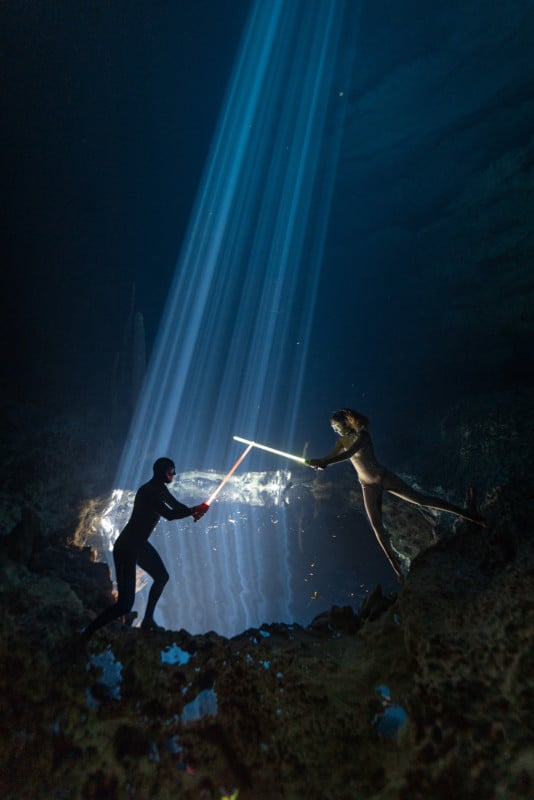 “I also used a relatively slow shutter speed of 1/60th, to keep iso down as much as possible — the Canon isn’t as good as the Sony at dealing with high ISO, you can really see it when you start editing the files.”