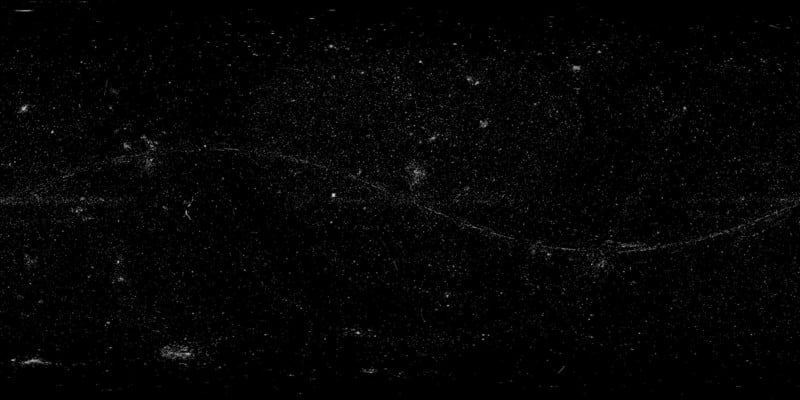 Hubble recently celebrated 32 years of imaging the sky, which has resulted in over 1.4 million observations. Physicist Casey Handmer combined those observations into a single image to see how much of the sky Hubble had actually captured.

Handmer explains that Hubble’s field of view is 202 arc seconds, and so about 3.2 million observations would be enough to cover the sky. Since Hubble has shot more than a million photos since it was launched in 1990, that must mean that it has completed about half of the possible observations of the area, right?

“Not quite,” Handmer found.

Handmer says that while Hubble has been hard at work for 32 years, there are areas of the night sky that are more interesting to astronomers and as such, its time has not been spent shooting all of what is possible.

“I was curious to see what fraction of the sky Hubble had imaged. Even though around 3.5 million exposures of its 202 arc-second field of view should be sufficient to cover the sky, Hubble was not designed to perform wide-field surveys, and in fact, it’s about 1.4 million observations cover less than 0.8% of the sky,” Handmer explains.

And here's one that's a bit easier to see on Twitter. pic.twitter.com/dlNS5jbod3

He says that some observations take longer than others and that, combined with repeated observations of the more interesting areas of the sky, is why despite its huge number of total observations, a vast majority of the universe still remains unexplored through its cameras. That, and Hubble’s field of view is quite narrow compared to telescopes that are designed to image the whole sky.

Handmer tells Universe Today that the Vera Rubin Observatory which is designed to image the entire sky can do so in a week.

The image Handmer generated uses data from Astropy. The curved “line” of observations through the center of the image represents Hubble’s numerous and repeated observations of planets, moons, and asteroids in the Solar System. The clusters of observations near the bottom left represent the Magellanic clouds, two small galaxies that are near the Milky Way. Universe Today explains that the other larger clusters are other nearby galaxies, and the disk of the Milky Way is the U-shaped curve through the middle.

“I was originally running the numbers on angular resolution versus wavelength versus period for all sky surveys, trying to understand how close our present state of knowledge is to ultimate physical limits. It would be neat, for example, to be able to image exoplanets,” Handmer tells PetaPixel.

“When I first saw the data I was mostly preoccupied with making it presentable, rather than a random noisy mess of pixels. But it was quite cool to be able to see familiar features emerge, like seeing an old friend after a long absence.”

Thanks to the Astropy API and Handmer’s work, this image gives an idea of what Hubble has been looking at for the last three decades.

“Hubble is an amazing instrument but it has been in space for almost 32 years and will not last forever,” Handmer tells Universe Today. “We are fortunate to finally have the James Webb Space Telescope launched and operating but imagine what we could see if we launched a new telescope like this every year!”

News, Spotlight
astrophotography, combined, data, galaxy, hubble, hubblespacetelescope, observations
Related Articles
Discussion
Trending Articles
Wedding Photographer Tells Couple to Act Drunk, Gets Amazing Portraits
May 20, 2022
Blood Moon, Aurora, and Milky Way Captured in One Photo
May 19, 2022
The Science Behind Why Watches are Set to 10:10 in Advertising Photos
May 17, 2022
Milky Way Explodes Into View During Lunar Eclipse
May 18, 2022
7 Tips for Photographing Dreamlike Landscapes
May 19, 2022