NASA’s Hubble Space Telescope was deployed on April 25, 1990, so this week marked the 28th anniversary of the telescope providing humankind with breathtaking photos of deep space. To celebrate, NASA released this 30-second video that zooms into the Milky Way’s central bulge to a new photo just released of the Lagoon Nebula over 4,000 light years away.

Here’s the new photo of the nebula, captured by Hubble’s Wide Field Camera 3 in February of this year, which shows it in unprecedented detail: 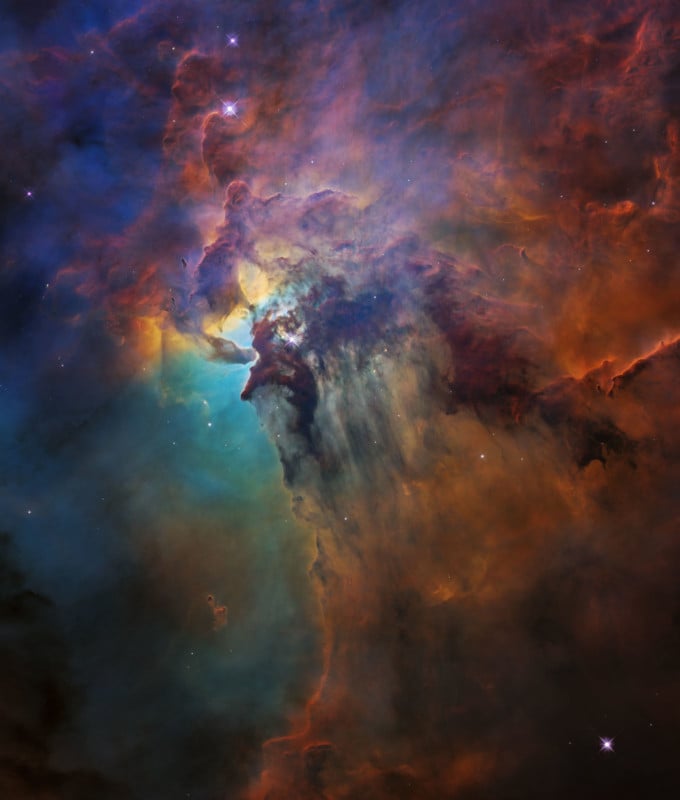 “At the center of the photo, a monster young [1 million year old] star [named Herschel 36] 200,000 times brighter [32 times more massive, 9 times wider, and 8 times hotter] than our Sun is blasting powerful ultraviolet radiation and hurricane-like stellar winds, carving out a fantasy landscape of ridges, cavities, and mountains of gas and dust,” NASA writes. “This region epitomizes a typical, raucous stellar nursery full of birth and destruction.”

The Lagoon Nebula is visible from the ground on Earth using binoculars. It will appear as a smudge of light in the sky with a bright core.

Here’s an older video from 2015 showing an even longer zoom into an older image of the Lagoon Nebula — this video starts with a ground-based view of the night sky.

The Hubble telescope has so far captured over 1.5 million observations of over 40,000 space objects. Here’s a sense of how powerful its reach is: if it could photograph Earth, it would be able to see objects on the ground as small as 1 foot across (30cm) from its orbit 350 miles (570km) away.

SOUNDCAM is the First ‘Affordable’ Handheld Camera for Seeing Sound