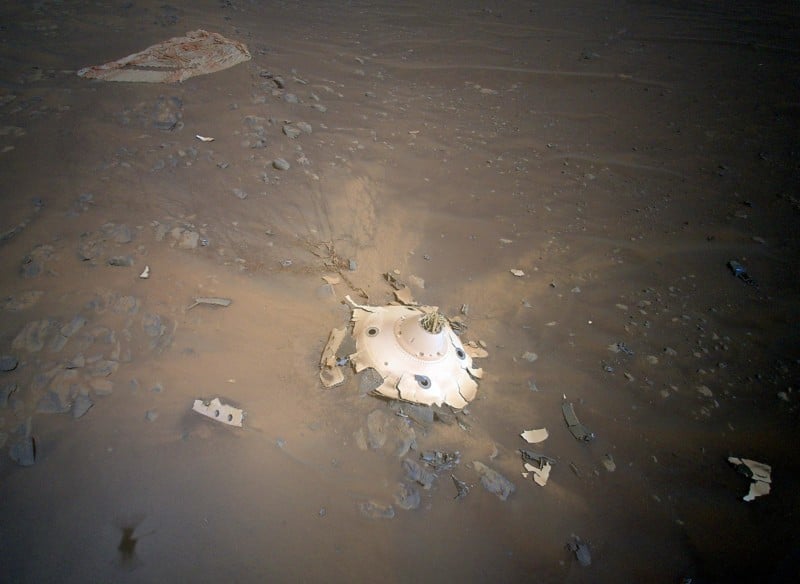 The Mars helicopter drone Ingenuity has captured aerial photos of some of the used Perseverance landing gear. NASA says this detailed aerial perspective could provide valuable insights for future missions.


Ingenuity recently surveyed the parachute that Perseverance used to land on Mars as well as the cone-shaped backshell that protected the rover when it descended from space towards the Martian surface. Ingenuity was tasked with capturing these photos by NASA engineers who wanted to see this particular perspective to provide further insight into the landing and inform future landings.

The state of the remains, which looks like a crashed alien spaceship out of a science fiction movie, is due to the extremely fast-paced and stressful nature of a descent onto Mars from space. NASA says that vehicles that attempt to land have to deal with extreme gravitational forces and high temperatures as they descend at speeds of nearly 12,500 miles per hour. The photos show an upright backshell and debris field that is the result of it impacting the Martian surface at about 78 miles per hour.

While the wreckage has been previously photographed by Perseverance on the ground, this perspective provides engineers with more detail and has the potential to help ensure safe landings for future spacecraft. The backshell’s protective coating appears intact, as are many of the high-strength suspension lines that connect it to the parachute.

“Perseverance had the best-documented Mars landing in history, with cameras showing everything from parachute inflation to touchdown,” Clark says. 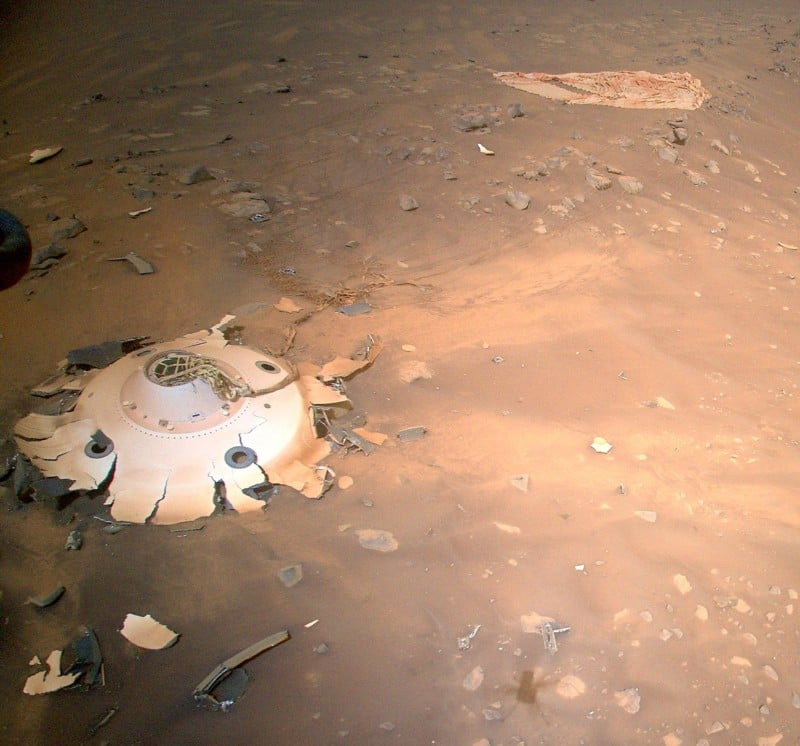 “But Ingenuity’s images offer a different vantage point. If they either reinforce that our systems worked as we think they worked or provide even one dataset of engineering information we can use for Mars Sample Return planning, it will be amazing. And if not, the pictures are still phenomenal and inspiring.”

Ingenuity originally took flight lin April, 2021 and has operated on the Red Planet for a year. The helicopter drone continues to exceed expectations.

This particular mission was a 159-second flight that began at 11:37 AM local Mars time on April 19, the one-year anniversary of its first flight. Ingenuity flew 26 feet above the ground and traveled a distance of 630 feet to the southwest to capture the first picture of the mission. It then headed southwest and northwest and took photos along the pre-planned route. After it captured 10 total images, it returned west and landed. It covered a total distance of 1,181 feet.

With the completion of this mission, Ingenuity has logged over 49 minutes of flight time and traveled a total distance of 3.9 miles.