NASA’s Mars helicopter drone Ingenuity has set a new record as it flew farther and faster than ever before and was captured by the aircraft’s navigation camera.

The record-breaking flight can be watched thanks to Ingenuity’s black-and-white navigation camera that has provided footage of its 25th flight which took place on April 8. The helicopter flew 2,310 feet at 12 miles per hour, which is the longest and fastest flight to date.

“For our record-breaking flight, Ingenuity’s downward-looking navigation camera provided us with a breathtaking sense of what it would feel like gliding 33 feet above the surface of Mars at 12 miles per hour,” Ingenuity team lead Teddy Tzanetos of NASA’s Jet Propulsion Laboratory in Southern California says.

The video starts about one second into the flight and shows the drone heading southwest at an altitude of about 33 feet and accelerating to its maximum speed in less than three seconds. First, ripples of sand can be seen which are then followed by several rock fields about halfway through the clip. Finally, Ingenuity lands in what NASA describes as relatively flat and featureless terrain.

The video’s original length is 161.3 seconds long but has been sped up for distribution online to less than 35 seconds.

The reason the camera isn’t on for the takeoff and landing is that it has been programmed to deactivate whenever the helicopter drone is within three feet of the surface to help prevent any dust kicked up during those periods from interfering with the navigation system. 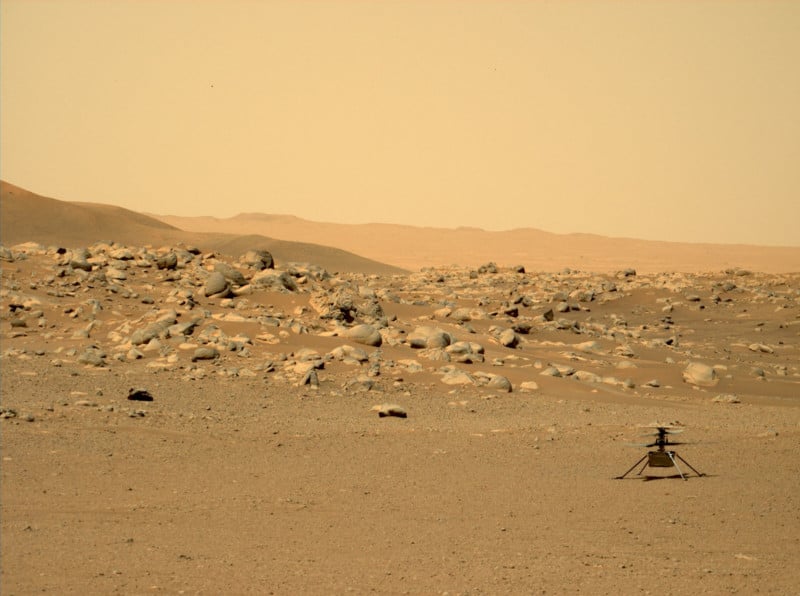 Ingenuity became the first aircraft in history to make a powered, controlled flight on another planet on April 19, 2021, from Wright Brothers Field in Jezero Crater, Mars.

Ingenuity has been successfully taking to the Martian skies since. It has performed admirably despite nearly crashing last year during its sixth flight thanks to a camera glitch. Since then, has been used to capture multiple photos and videos including an aerial shot of the Perseverance’s landing wreckage.

Recently, Ingenuity’s mission controllers lost communication with the helicopter drone on May 5 after it entered a low-power state. But the craft is back online and has received adequate power from its solar array to charge its six lithium-ion batteries and is preparing for its next flight, its 29th.