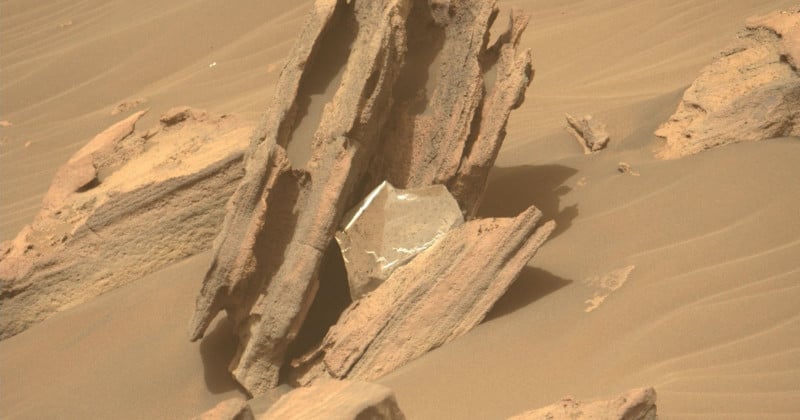 NASA’s Mars Perseverance Rover has spotted something unexpected: a piece of the thermal blanket that the rover’s team believes may have come off its rocket-powered jet pack when it made its descent to the Red Planet last year.

The piece of material, now very much space garbage, was spotted lodged between the crevices of a rock on the surface of Mars. The Perseverance Rover shared the photo on Twitter with a brief explanation of how its team thinks it may have ended up there.

“My team has spotted something unexpected: It’s a piece of a thermal blanket that they think may have come from my descent stage, the rocket-powered jet pack that set me down on landing day back in 2021,” the rover’s team writes on Twitter. 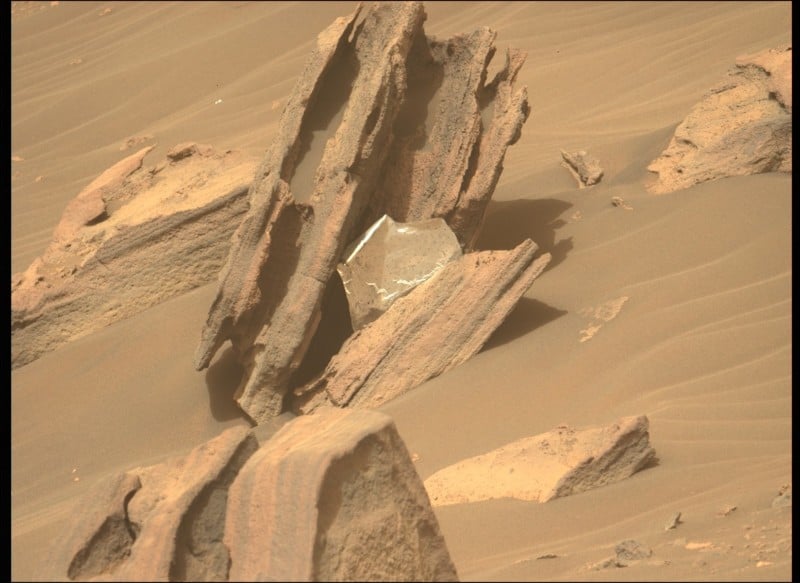 “That shiny bit of foil is part of a thermal blanket — a material used to control temperatures.”

Here’s part of the team at JPL that wrapped me up in thermal blankets. Think of them as spacecraft dressmakers. They work with sewing machines and other tools to piece together these unique materials.

Earlier this year, the Mars helicopter drone Ingenuity captured some aerial photos of the Perseverance’s landing gear. The rover’s team will use the photos to gain more insight into how the rover landed on the planet and inform future missions to Mars.

That set of wreckage was expected and had also been photographed by Perseverance from a ground-based perspective, but finding this small bit of thermal blanket where it is comes as a surprise.

“It’s a surprise finding this here,” the Perseverance team says, writing from the perspective of the rover. “My descent stage crashed about two kilometers away.”

Finding the bit of trash here leads to more questions, since it’s not clear how it ended up so far away from the crash site.

“Did this piece land here after that, or was it blown here by the wind?”

The Perseverance mission, including the Ingenuity helicopter, have made the most recent exploration of Mars the most well-documented in the history of the space program. The number of high-resolution cameras at the team’s disposal means that it is able to show far more than any other previous expedition. As a result, it should come as no surprise that the Perseverance is capturing more of its impact on the Martian landscape than previous missions, even if that means a bit of space litter.