NASA is targetting early April for the first flight of its Ingenuity Mars Helicopter, a drone that will mark the organization’s first attempt at a powered, controlled flight of an aircraft on another planet where it will hover over the surface and capture aerial images.

Ingenuity is currently attached to the base of NASA”s Perseverance rover, which has been on the surface of Mars since February 18 and has already set back multiple sets of images ranging from curious test shots of its landing area to breathtaking panoramic vistas.

The rover is currently in transit to what NASA is calling an “airfield” where Ingenuity will attempt to fly. As Engadget reports, once it is deployed, it will have 30 Martian days (31 Earth days) to conduct its test flights. The location, a 33-by-33 foot stretch of terrain within the Jezero Crater, was selected for its relative flatness. 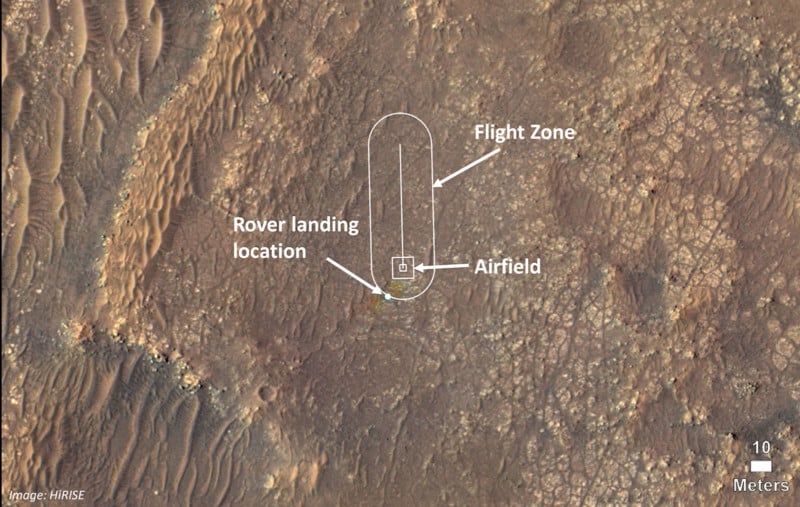 As can be imagined, flying a camera drone on Mars is no easy task. According to NASA, not only does the Red Planet have less gravity than Earth (about one-third the amount), the atmosphere is just 1% as dense.

“During Martian daytime, the planet’s surface receives only about half the amount of solar energy that reaches Earth during its daytime, and nighttime temperatures can drop as low as minus 130 degrees Fahrenheit (minus 90 degrees Celsius), which can freeze and crack unprotected electrical components,” NASA says. “To fit within the available accommodations provided by the Perseverance rover, the Ingenuity helicopter must be small. To fly in the Mars environment, it must be lightweight. To survive the frigid Martian nights, it must have enough energy to power internal heaters. The system – from the performance of its rotors in rarified air to its solar panels, electrical heaters, and other components – has been tested and retested in the vacuum chambers and test labs of NASA’s Jet Propulsion Laboratory in Southern California.”

After Ingenuity has been dropped off by Perseverance, the rover will carefully drive away and allow the helicopter drone to charge its solar cells. If all goes according to plan, Ingenuity will raise itself above the surface at a rate of about three feet per second (1 meter per second) and will hover at 10 feet (3 meters) above the surface for up to 30 seconds. Then, the Mars Helicopter will descend and touch back down on the Martian surface.

“Several hours after the first flight has occurred, Perseverance will downlink Ingenuity’s first set of engineering data and, possibly, images and video from the rover’s Navigation Cameras and Mastcam-Z,” NASA explains. “From the data downlinked that first evening after the flight, the Mars Helicopter team expect to be able to determine if their first attempt to fly at Mars was a success.”

The next day, all the remaining engineering data, as well as low-resolution black and white images from the helicopter, will make its way back to Earth. Another day later, two images taken by the helicopter’s high-resolution color camera should arrive. Once all this data is gathered, NASA can then determine the next course of action. 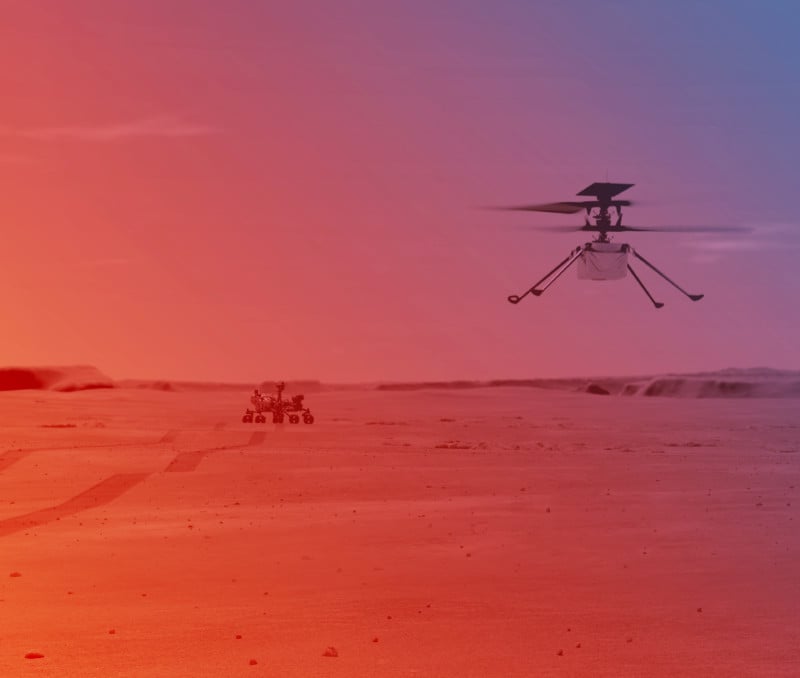 The amount of effort and ingenuity — no pun intended — it is going to take to successfully complete these tests is nearly unbelievable. In addition to the challenging conditions of the Red Planet’s surface, it currently takes radio signals about 11 minutes, 22 seconds to travel between Earth and Mars. Successfully flying a drone in a hostile environment with that kind of delay seems near impossible, but considering what NASA has achieved thus far with Perseverance, NASA may not know the meaning of the word.

A 50mm Lens is All You Really Need in Landscape Photography