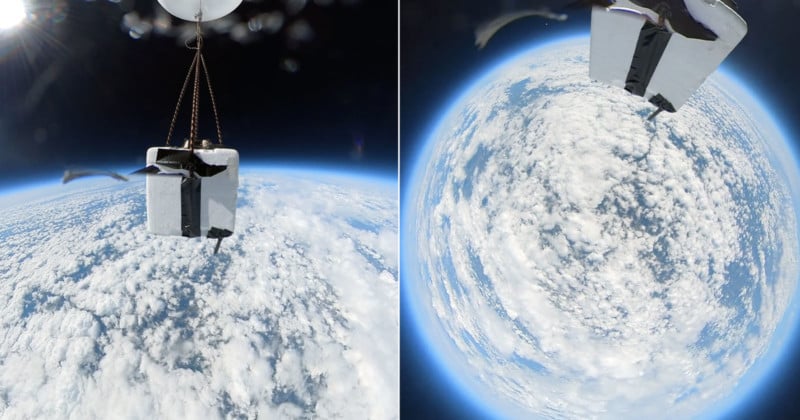 To celebrate Earth Day, the team from Hi-Impact L&D attached an Insta360 ONE X2 action camera to a weather balloon and sent it into the sky, allowing it to capture a stunning view of Earth from over 80,000 feet in the air.

Last December, the team from NewMakeIt performed a similar experiment and launched a camera rig into low orbit to create what they described as a “drone-esque” panoramic view of Earth.

It was actually that flight that made the Hi-Impact L&D team choose the Insta360 platform. The team says it chose to attach a ONE X2 camera to this rig because it has proven capable of operating at extreme temperatures. For example, this particular flight took the cameras to an altitude of 24,650 meters (about 80,872 feet). At that height, temperatures plummet to -45 degrees Celcius (-49 degrees Fahrenheit).

“We used to use a fly360 camera but it stopped working after a few years of going to the edge of Space and we required something to replace it,” Hi-Impact L&D says. “It was good to know that the camera would survive the temperatures and that the image quality was going to be really good, so we opted for the X2 and haven’t been disappointed!”

In NewMakeIt’s video, the weather balloon drifted to an astounding height of 100,000 feet. This particular launch from Hi-Impact L&D didn’t reach quite as high, but that was by design.

“We have done more than 20 flights and have reached 33,000 meters (108,000 feet) a couple of times but we control the amount of helium according to the conditions and on this occasion, we loaded up with more helium in order to trigger an earlier burst as the winds were taking the balloon too far away,” Hi-Impact L&D explains. “In doing this, we sacrifice a bit of altitude as the balloon goes up quicker and bursts earlier.”

The launch wasn’t without its challenges.

“The weather was terrible for this flight,” the Hi-Impact L&D team explains. “Very high winds, cold temperatures, and lots of rain as we were preparing to launch. The camera survived the conditions admirably but obviously, the image quality is reduced by the rain on the upper facing lens.”

For this video, the camera recorded for nearly two solid hours as the balloon made its ascent, survived the harsh temperatures, and was able to be recovered after it fell back to Earth. The usual process for recovery didn’t go as smoothly this time as it has in the past, however.

“We have a GPS tracker (SPOT Messenger) on our payloads as well as a mobile phone with a GPS tracking app. However, both of these failed on this particular flight,” Hi-Impact L&D says.

“Luckily we also had another GPS tracker linked to a radio system and a Raspberry pi computer and this worked up until the final few hundred meters of the descent. We just worked out the path it was on and how fast it was traveling and walked around in the area until we found it! Usually, the SPOT tracker works perfectly though and we know exactly where it is.”

More videos from Insta360 can be found on the company’s Instagram and TikTok.