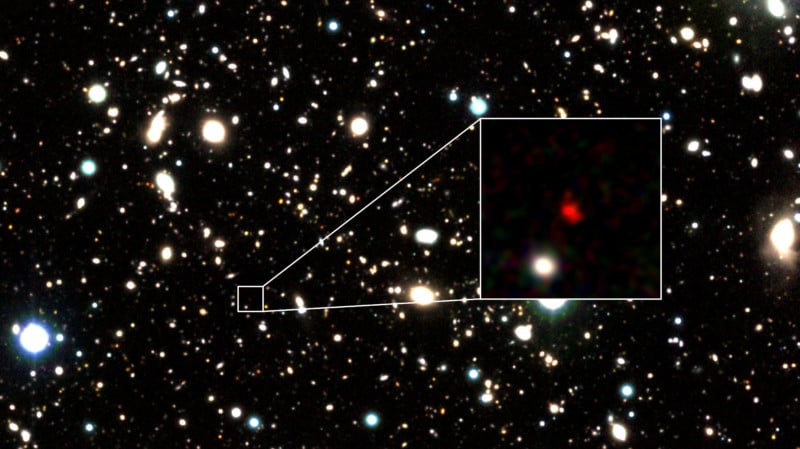 A team of international astronomers has discovered what is believed to be the most distant galaxy ever observed. Called HD1, it is 13.5 billion light-years away, 100 million light-years farther from Earth than the last record-holder.

The current record holder for the most distant galaxy is GN-z11, a galaxy 13.4 billion light-years away discovered by the Hubble Space Telescope in 2016 and is considered to be at about the farthest detection point for the storied space telescope. This is not to be confused with the farthest-away star that has ever been observed, which is named Earendel and was recently captured by Hubble thanks to a perfect alignment of celestial bodies that created a powerful gravitational lens.

HD1 is a candidate for the earliest and most distant galaxy and was discovered after more than 1,200 hours of observation data that was captured by a combination of the Subaru Telescope, VISTA Telescope, UK Infrared Telescope, and the Spitzer Space Telescope.

“It was tough work to find HD1 out of more than 700,000 objects,” Yuichi Harikane, the astronomer who discovered HD1, says. “HD1’s red color matched the expected characteristics of a galaxy 13.5 billion light-years away surprisingly well, giving me some goosebumps when I found it.”

After its initial discovery, the team performed follow-up observations with the Atacama Large Millimeter/submillimeter Array (ALMA) to confirm the findings. The original image above was released by the National Astronomical Observatory of Japan (NAOJ), ALMA’s partner in East Asia.

“We found a weak signal at the frequency where an oxygen emission line was expected. The significance of the signal is 99.99%,” Akio Inoue, a professor at Waseda University, who led the ALMA observations, says.

Statistical significance is a level at which the probability of the discovery is true and not made due to sampling error.

“If this signal is real, this is evidence that HD1 exists 13.5 billion light-years away, but we cannot be sure without a significance of 99.999% or more,” Inoue says.

The astronomers say that it is difficult to explain HD1 with the current theoretical models of galaxy formation. Additionally, the observational information on HD1 is limited and the galaxy’s physical properties are not yet known.

HD1 has been selected for the first cycle of observations from the James Webb Space Telescope, a sign of the astronomical importance of the finding.

“If the spectroscopic observation confirms its exact distance, HD1 will be the most distant galaxy ever recorded, 100 million light-years further away than GN-z11,” Harikane says. “We are looking forward to seeing the Universe with the James Webb Space Telescope.”

The research on HD1 has been published in the April 8, 2022, issue of The Astrophysical Journal as Yuichi Harikane, et al. “A Search for H-Dropout Lyman Break Galaxies at z~12-16”.

Image credits: Header image is a three-color image of HD1, the most distant galaxy candidate to date, created using data from the VISTA telescope. The red object in the center of the zoom-in image is HD1. | Credit: Harikane et al.