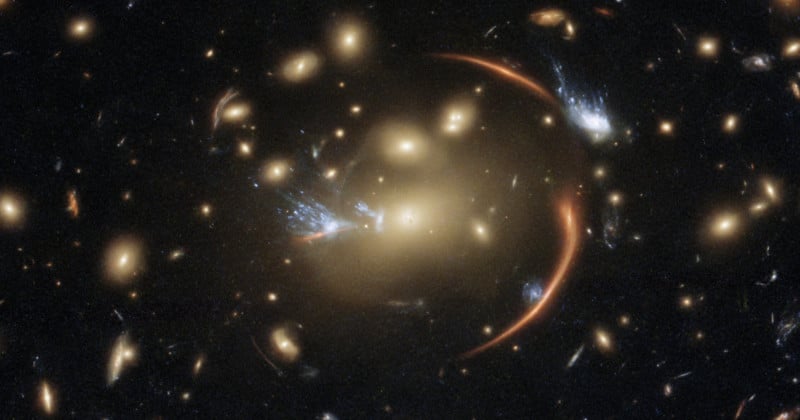 Hubble, which just came back online after being down for a month, has captured this stunning photo of a galaxy that exists a staggering 10 billion light-years away. The telescope can see and focus this vast distance by leveraging the power of gravity.

This photo of MRG-M0138, what NASA describes as a “slumbering giant” which has run out of the gas that is required to form new stars, is framed by a smattering of visible galaxies and stars that arc in a circular pattern. The Hubble Space Telescope’s ability to see the vast distances is also the cause of this unique visual effect: gravitational lensing.

Earlier this year, NASA fully explained how gravitational lensing works in a detailed video, but in short gravitational lensing occurs when light from a distant galaxy is subtly distorted by the gravitational pull of an intervening astronomical object. Gravity distorts space in such a way that it makes an “optic” that channels light towards Hubble and gives it the ability to see galaxies that are normally too far away to be studied with current technology and physical telescopes. NASA describes it as akin to looking through a giant magnifying glass.

“Astronomers can use gravitational lensing as a natural magnifying glass, allowing them to inspect objects like distant dormant galaxies which would usually be too difficult for even Hubble to resolve,” NASA explains.

NASA explains that this particular image was made using observations from eight different infrared filters spread across two of Hubble’s more advanced astronomical instruments: the Advanced Camera for Surveys and the Wide Field Camera 3. These two instruments were installed by technicians during Hubble’s last two servicing missions: Servicing Mission 3B which took place from March 1 through March 12 of 2002 and Servicing Mission 4, which took place between May 11 and May 24 2009.

“Two failed instruments, the Space Telescope Imaging Spectrograph (STIS) and the Advanced Camera for Surveys (ACS), were revived by the first-ever on-orbit repairs,” NASA continues. “With these efforts, Hubble was brought to the apex of its scientific capabilities.”

Hubble had been operating continuously for 31 years before an issue in June of 2021 nearly brought the satellite down. After a month of work, NASA was able to resolve the issue and keep the legendary telescope operational, and able to continue to capture some of the most breathtaking photos of the universe humans have ever seen.