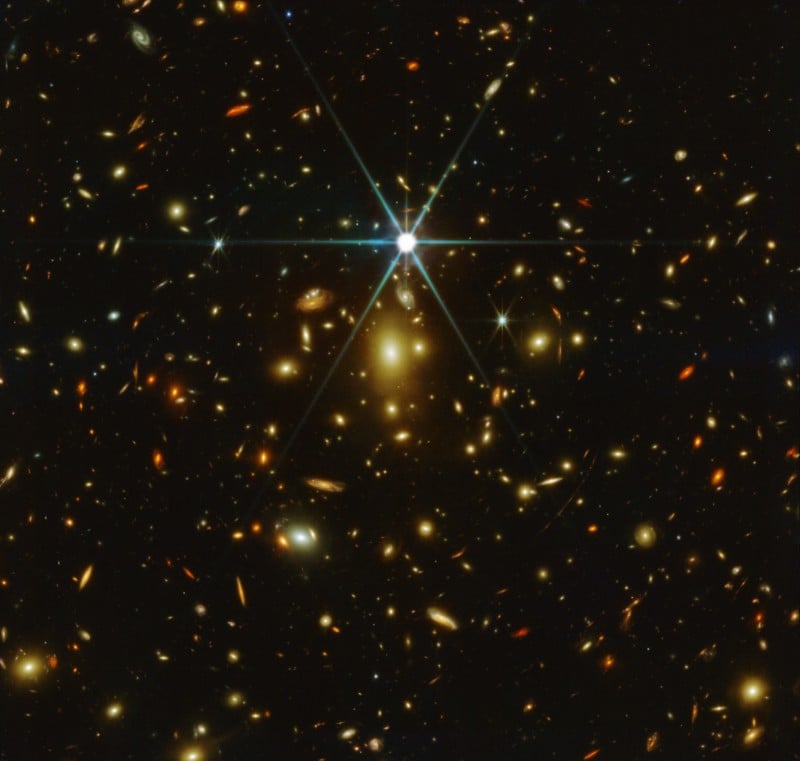 The James Webb Space Telescope has captured a glimpse of Earendel, the oldest and most distant star ever observed that was first discovered by the Hubble Space Telescope earlier this year.

Earendel was first imaged by Hubble in March, when the legendary telescope beat its own previous record it set in 2018 of capturing the oldest and most distant star. That star, named Icarus, existed when the universe was about four billion years old, or about 30% of its current age. But Earendel shattered that record and existed when the universe was just 7% of its current age. The light cast from Earendel took 12.9 billion years to reach Hubble.

Shared by the astronomer group Cosmic Spring, the above is the first photo of Earendel captured by the James Webb Space Telescope (JWST).

Normally, light cast from stars at this great of a distance look like nothing more than small smudges as light from millions of stars blends together and becomes difficult to discern. But astronomers are lucky in the case of Earendel, as the galaxy that hosts it has been magnified and distorted by gravitational lensing.

“You can see Earendel as it’s lensed by the cluster, WHL0137-08, in the center of the image,” Cosmic Spring writes, explaining that the JWST is able to capture the distant star for the same reason Hubble was.

Looking at the photo, it can be easy to assume that the giant star in the center of the image is Earendel, but that is not the case. Instead, the distant star is almost hiding in a small arch of light in the lower right.

The JWST was able to take this photo and see Earendel thanks to the data provided by Hubble’s observation. Below is a gif created by the astronomers that shows Hubble’s photo of the region compared to the new one captured by the state-of-the-art JWST:

Watch these galaxies brighten and appear as the Hubble image fades into the JWST image of the same galaxy cluster. pic.twitter.com/FkfGOrfAS7

The astronomers only saw this image on Saturday and are still looking into the details of the observation and plan to provide more information once they have had a chance to more closely examine the data.