My love of astronomy started way back as a child when my dad bought a Celestron C8 telescope. I remember spending hours with him searching to find a single dark sky object. This love of the night sky stuck with me and it wasn’t until 2012 I made a New Year’s resolution to go out for one night each month near the new moon to do astronomy, astrophotography, and time-lapse of the night sky.


I went out each month in 2012. Now a decade has gone by and I still try to find one night each month to get out with my telescope and cameras. I love being out under a dark sky with family and friends looking through my telescope at galaxies, nebulas, and clusters.

In an effort to share what it’s like to be out under a dark sky with a telescope I’ve been trying to create what I call a Telescope First-Person-View Time-lapse. The idea is to take simultaneous time-lapses, one shooting through a telescope and the other with a wide-angle lens piggybacking the telescope to give context to the deep sky object. 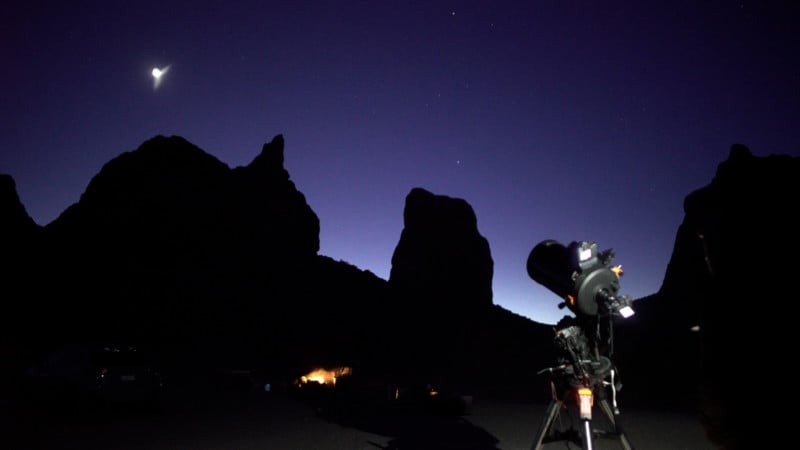 The hope is to simulate what each person does after looking through the telescope, which is to look up at the dark sky to attempt to see what it was they were just looking at with the naked eye.

I’ve found this to be technically challenging for several reasons.

1. Capturing time-lapse through a telescope means you really need to quickly find and lock onto your target. For this, you need a good telescope mount with accurate goto functionality. Doing normal visual observing it’s not nearly important because you can spend a little extra time looking through the eyepiece to find your object. With practice, this isn’t difficult, but with the cameras attached taking time-lapse photos, you can’t use your eyepiece. After an attempt in 2015, I realized I couldn’t do the idea justice without an upgrade to my telescope mount. Last year I upgraded my mount to the Celestron CGX-L mount. This mount has performed flawlessly and gave me the confidence to try this idea again!

2. Syncing the time-lapses can be challenging. I first used two intervalometers to individually trigger the cameras. I started them at the same time with the same intervals, but I found out that one had a slightly faster internal clock than the other. This resulted in out-of-sync timelapses. To solve this I was able to take the signal of a single intervalometer and split it to both cameras.

3. I use a Celestron C11 telescope which has a 2800mm focal length and 11″ aperture which gives it an f/10 focal ratio. It’s long and slow and requires long exposures to capture enough light to create a good result. To help shorten my exposure length I used a focal reducer that reduced my 2800mm focal length to 1764mm. This results in a new focal ratio of f/6.3, giving me +1.3 EV with the same exposure time and iso. This means I can use less than half the exposure time to get a similar image.

4. To capture these images you need cameras that are sensitive to low light. I used my trusty Canon 6D paired with a Rokinon 85mm 1.4 for the piggyback camera. The camera at prime focus was a Sony a7S II.

5. To capture these images you need a dark sky. It took me 3 attempts spread over many months. I first traveled to the Ancient Bristlecone Pine Forest in the White Mountains of California, then the Coso Mountains in Owens Valley CA, and finally the Trona Pinnacles near Ridgecrest, CA.

6. Finally you need clear dark skies. I made sure to make my attempts near the new moon and unfortunately the weather didn’t want to cooperate. My first attempt was windy and cloudy and was a complete bust. Even on my best attempt I dealt with very gusty wind and clouds that ruined much of the first half of the night. To help reduce the shake in the images I shortened my planned length of the exposures from around 1 min all the way down to 15s. I was hoping the shorter exposures would give me a better chance to capture still images between wind gusts.

To capture the images I used an interval of 30 seconds and captured 1,354 frames on each camera with both cameras taking 15-second exposures at ISO 6400. I spent about 20 minutes on each object before moving the telescope to the next. By the end of the night, I had captured 16 separate objects. I captured some of my favorite objects in the night including the Orion Nebula, Whirlpool Galaxy, Bode’s and Cigar Galaxies, The Great Globular Cluster in Hercules, and the Ring Nebula. Eventually, at around 3 am, I was about ready to fall asleep and I set the telescope on the heart of the milky way to capture the Lagoon Nebula and get the incredible Milky Way core rising through the 85mm lens.

I still feel like there’s a lot of room for improvement with this idea. The two main areas of improvement would be first to try on a calmer, clearer night! This would allow for longer exposures and cleaner less noisy images. The second would be to better align the telescope so that the images don’t drift during the time-lapse. In the end, I was happy with the result. I was amazed at the number of satellites I captured streaking through both cameras’ sensors. The individual images are not all that spectacular compared to what an entire night of data collection would give, but for 15-second exposures, I thought it turned out well.

You can watch the telescope first-person-view timelapses starting at 5:44 in this video:

I hope that the timelapse helps share what it feels like to be out there enjoying the night sky with a telescope.

Here are the 16 deep-sky objects (DSO) I captured: You can find more of Kenneth Brandon’s work on his YouTube channel.