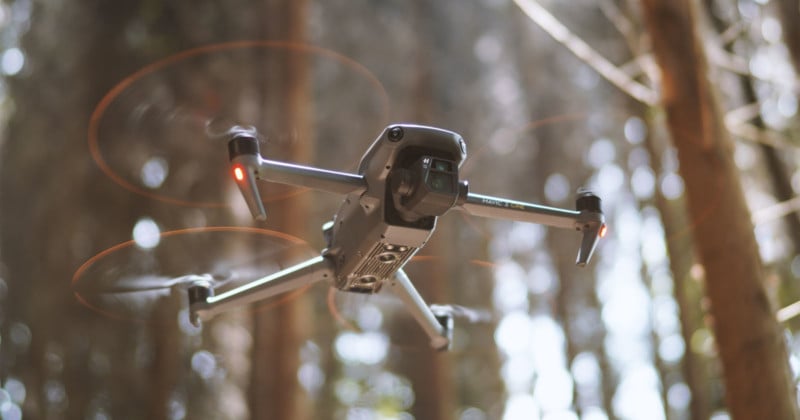 MediaMarkt, the largest electronics retailer in Germany, has removed drones made by DJI from its retail locations and its website amid allegations the Chinese company is leaking GPS data to the Russian military. DJI vehemently denies these reports.

For several weeks, DJI has been accused of either directly assisting the Russian military or actively suppressing the capabilities of its AeroScope technology for Ukrainians. The company publicly denied it was doing so on March 14, but its statement has not curbed allegations.

An Onslaught of Allegations

Two days after PetaPixel’s report, the Vice Prime Minister and Minister of Digital Transformation of Ukraine brought renewed scrutiny against the Chinese company when he claimed that DJI products were being used to guide missile attacks on Ukrainians.

DJI again denied these allegations and stated that its products are designed for civilian use and do not meet military specifications. In its response, the company essentially pleads with the Ukrainian official and claims that it actually cannot take part in the actions it is being accused of.

“Please understand that DJI cannot obtain user information and flight data, unless the user actively submits it to us,” the company writes. “We do not have the ability to identify and verify a user’s location, and therefore we do not hold the data you have requested.”

Despite its responses, DJI has continued to find itself under siege on social media, particularly on Twitter. The online blowback to these allegations came to a head over the weekend as Germany’s largest electronics retailer announced it would stop selling the company’s drones.

MediaMarkt announced that it would cease the sale of DJI drones in response to allegations that the company was supporting the Russian military in its attack on Ukraine.

As a responsible company, we have taken immediate action and removed the manufacturer from our product range groupwide until further notice. We will closely examine further indications and developments. (2/3)

While DJI previously only responded to similar allegations on Twitter, this action by MediaMarkt prompted a more official response on both its global and English-based websites. The company claims that it is the victim of a coordinated campaign to spread misinformation about its business and its products and that it is the victim of thousands of spam messages that contain the same content.

“As a matter of precaution, one of our partners suspended all sales of DJI products while evaluating the situation in close cooperation with DJI,” the company writes, referring to MediaMarkt.

“The allegations made against us are not based on facts and are utterly untrue. Our official response to the current situation was posted on our official twitter accounts on March 13, March 17, and March 25,” the company says.

The company says that it is a proponant of its products being used to benefit society, and that it does not support any use of its drones to do otherwise.

“DJI takes compliance issues very seriously. We are committed to act in accordance with sanctions, export controls, and other applicable laws and regulations. We have a dedicated in-house compliance team and experienced US and European external counsel, to ensure our general business practices and transactions are in full compliance with applicable rules and regulations.”

It’s unclear what DJI would have to do in order to convince those who allege the company is working in conjunction with the Russian military that it is not doing so, as the company appears to have exhausted all options available to it. Public denials appear to be falling on deaf ears. DJI has insisted that its products are not fit for use in a warzone, even though the drones have been reportedly very useful to the Ukrainian military.