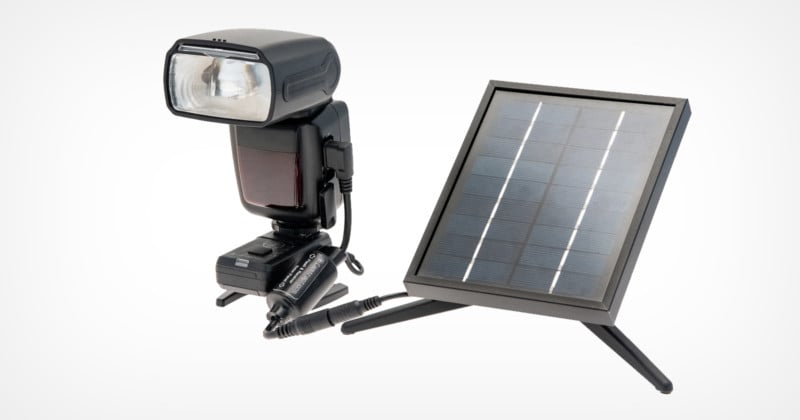 Camtraptions has announced a solar panel that works in tandem with its speedlight for use in long-term, off-the-grid camera traps. The compact solar panel allows the flashes to be deployed for extended or even unlimited periods of time.

A “camera trap” refers to a camera that can be automatically triggered to take a photo by a change of some kind in its vicinity. Camera traps are used by wildlife photographers to take photos of skittish, hard-to-find animals in remote locations and can be equipped with a range of sensors, oftentimes a passive infrared motion sensor, that can allow a camera to operate without a photographer for long periods of time.

For use at night, many camera traps use compact speedlights to illuminate an environment and capture clear photos of wildlife.

Bruce Taubert has been photographing coyote and bobcats in his local area.

“In order to avoid cacti, bushes with stickers, and uneven terrain, these larger mammals do most of their traveling in washes”. pic.twitter.com/AUM5UJyB5O

Fernando Boza has been using the Camtraptions PIR sensor to capture these photographs of bobcats in Boulder, Colorado! pic.twitter.com/Swz1V1cGeO

While most modern cameras do a good job of saving power by automatically going into a standby mode when not actively in use which allows them to stay in the field for long periods of time, strobes need a lot more power to operate and can often run out of juice well before a camera or a sensor needs to be recharged.

Camtraptions, which sells a host of housings, strobes, sensors, and triggers for use in camera traps, has created a solution. The company says its newly available solar panels are part of a new flash ecosystem for camera trap photography. The new solar panel connects directly to the side of the Camtraptions speedlight, which is the same interface that allowed the speedlights to be plugged into a large external battery for extended standy time.

The solar panel replaces the need for that extended battery and can, in some cases, greatly increase the amount of time a strobe will have power when placed out in the wilderness and away from electricity. Given adequate sunlight, it is possible for the strobes to remain on site for an unlimited amount of time.

The solar panels are available in two sizes: a 230mm x 135mm 3W panel and a 160mm x 130mm 1W panel. The 3W panel is the recommended size for locations with weaker sun or less consistent sunny weather and the 1W panel is recommended for areas with more intense and consistent sun.

Camtraptions says that its solar panels must only be used to charge Ni-MH (Nickel Metal Hydride) Rechargeable Batteries, and only with Camtraptions flashes.

The company may have made that last note because its Z1 Camera Trap Zoom Flash bears a striking resemblance to the Neewer NW561 speedlight. That is to say, it’s clearly the same flash. What isn’t clear is if the Camtraptions solar panel will work with the Neewer branded speedlight, but there doesn’t appear to be any reason why it would not, and Camtraptions very likely would prefer to sell its £89 (about $116) version rather than encourage purchasing the flash from Neewer directly for $66.

Camtraptions camera traps are well respected in the industry and have been used in some impressive projects, like photographer Will Burrard-Lucas’s photos showing an ultra-rare wild black panther under the starry night sky.