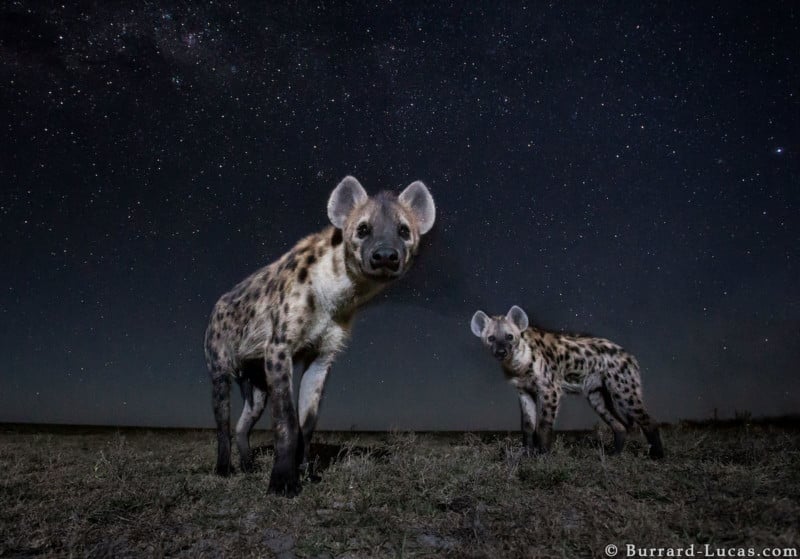 The low-light capabilities of modern cameras allow us to photograph wildlife in ways that would previously have been impossible. Over the last year or so, I have pushed my cameras to the limits in order to take striking images of nocturnal African animals.

To this end, I teamed up with African Parks and Norman Carr Safaris to undertake two expeditions to Liuwa Plain, a remote national park in the west of Zambia.

I planned to use a variety of techniques to photograph animals at night but not all of my set-ups were complicated. Simply by pushing the ISO up on my Canon 1DX and using a fast 400mm f/2.8 lens, I was able to photograph a group of reedbuck as they were backlit by flames of a bushfire. 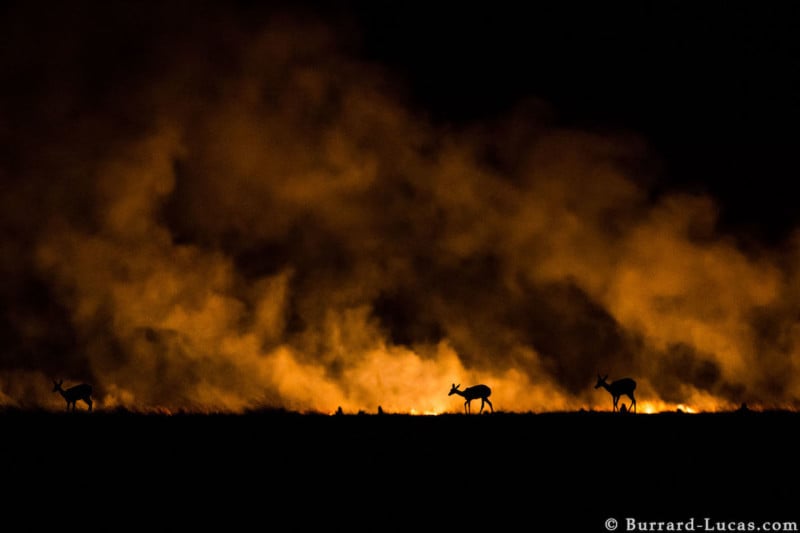 My first aim was to take images showings animals under the beautiful, starry sky—the night sky in Africa is simply spectacular! To achieve these shots, I would need a wide-angle lens and a ground-level perspective so that I could look up at the subject and have the sky as a backdrop.

BeetleCam, my remote control camera buggy, would be the perfect tool for this. 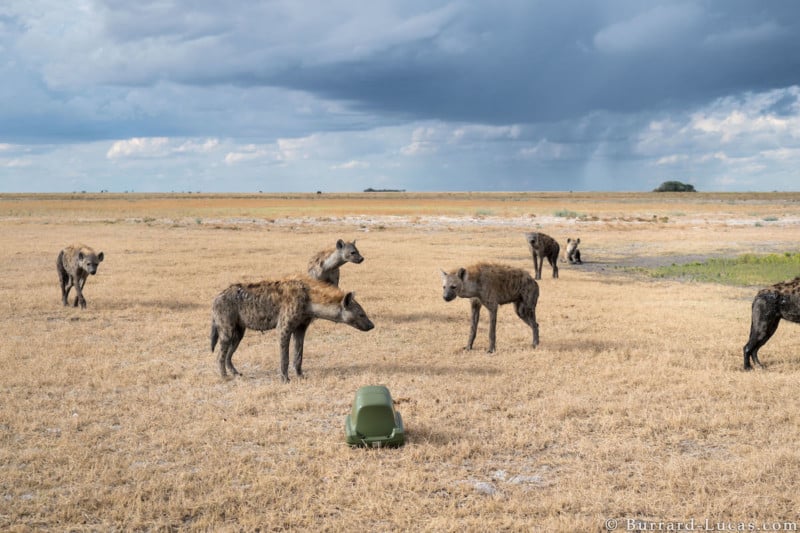 I was going to achieve these shots in a single exposure, in-camera. To expose the stars, I would need to use a high ISO and a shutter speed of around 10 to 15 seconds. The animal would be exposed by a flash at the beginning of the exposure. No animal would stay still for the duration of the exposure but, as long as there was no moonlight, it wouldn’t matter; if the animal moved after the flash the animal would just block out light from the stars but it wouldn’t otherwise show up. I had to use manual focus and judge the distance between the camera and subject by eye as there wasn’t enough light to rely on autofocus.

On my first night in Liuwa I had the opportunity to use this technique to photograph the resident pride of lions. The resulting picture is one of my favourite from the entire project! 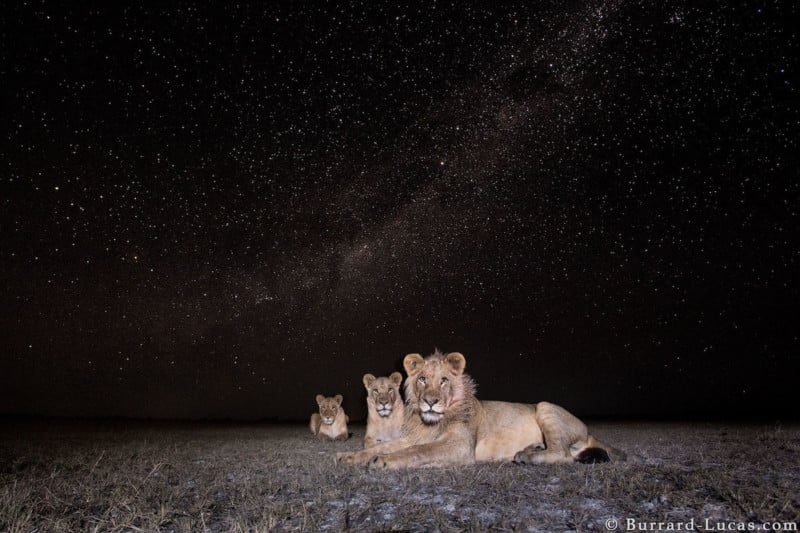 Later, I used this same technique to photographs lions at twilight. The only difference here is that I reduced the exposure time to balance the brightness of the sky with the flash. 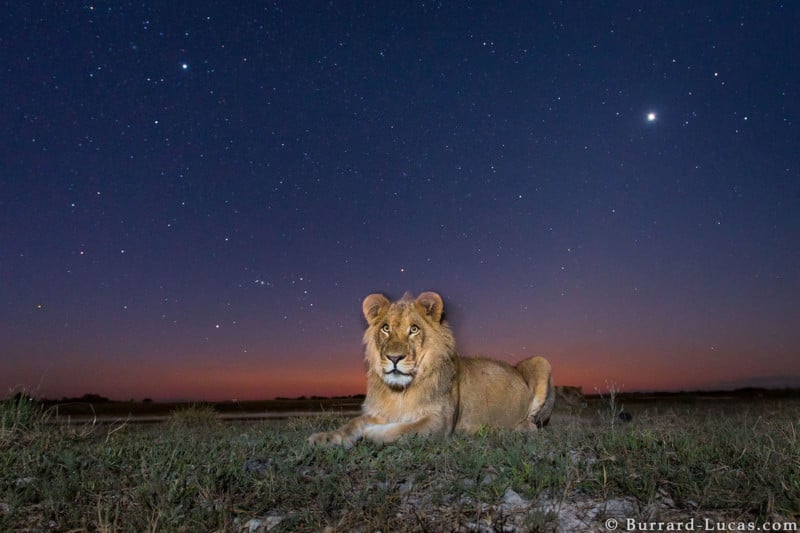 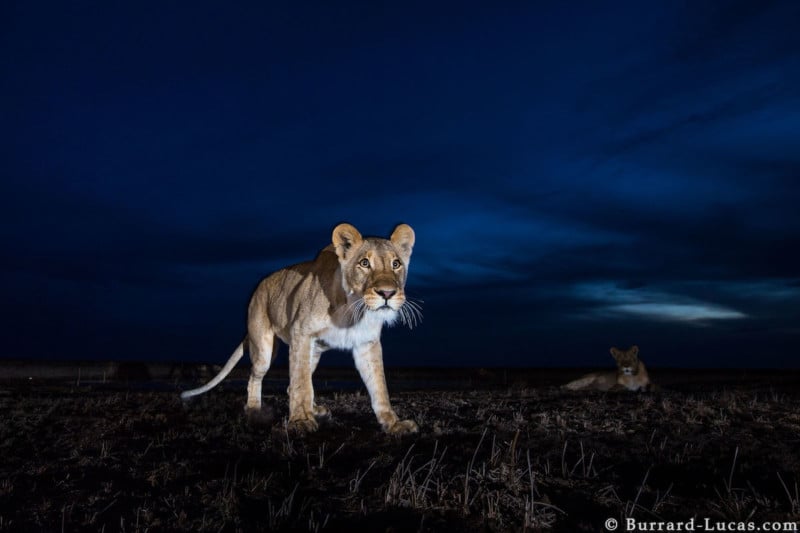 Hyenas greatly outnumber the lions and are the dominant predators in Liuwa Plain. They are mainly nocturnal so they made ideal subjects for this project. 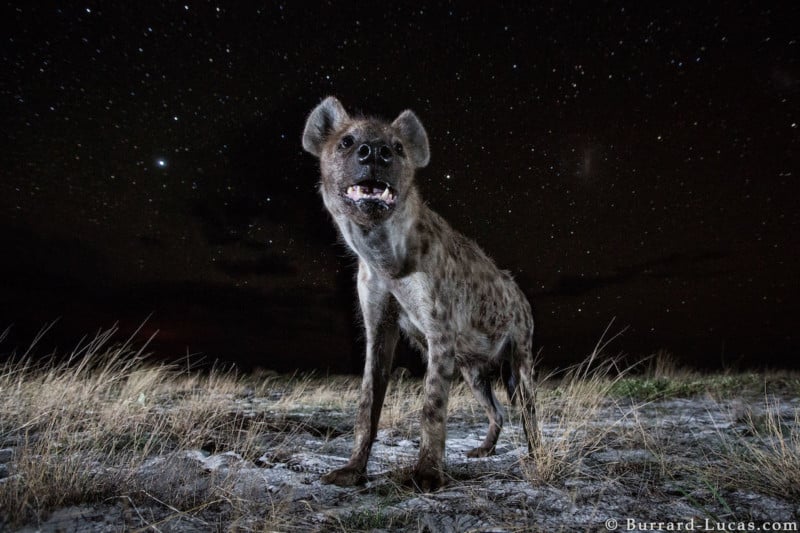 The shot below is another of my favourites. The “ghosts” appeared because the moon was up and it brightened the sky. Some of the hyenas moved after the flash and shadows formed when they paused to look at the camera. 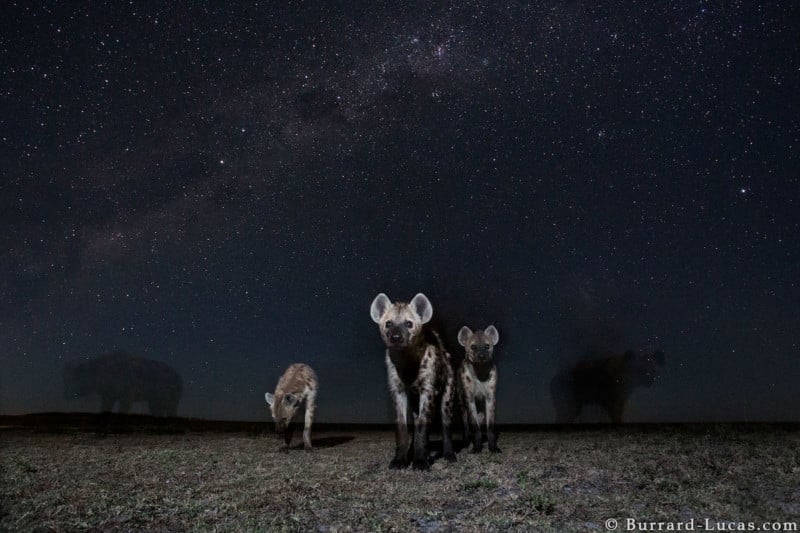 I think these shots capture the spirit of these nocturnal animals in a way that isn’t possible when photographing them during the day.

I also wanted to photograph some of the shyer nocturnal species. My Camtraptions camera traps were a perfect tool for this. I set one up at a waterhole and captured the image below of a porcupine drinking. To my surprise, it also snapped a zebra drinking in the middle of the night! 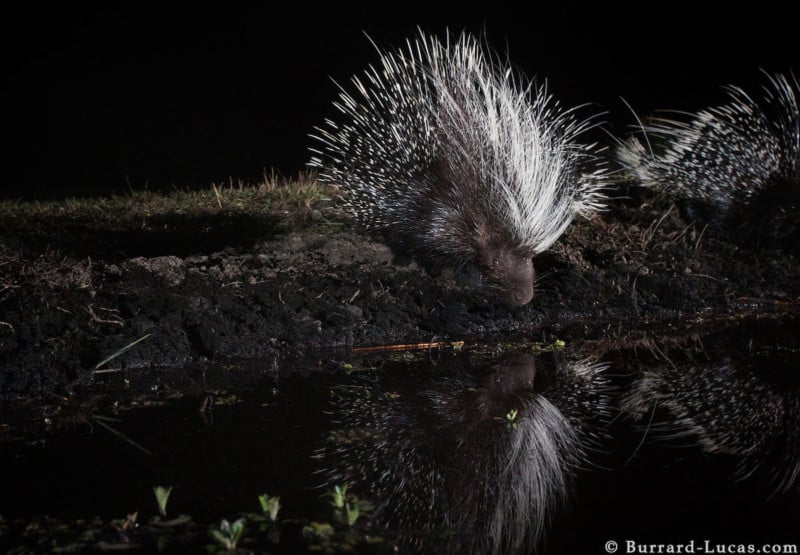 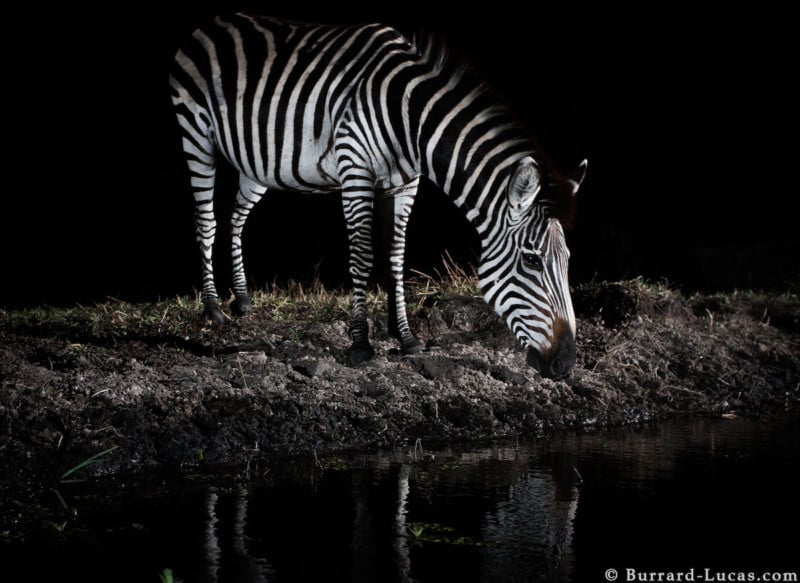 I was in Liuwa for the end of the long dry season and the start of the rains. With the rain came large herds of wildebeest (Liuwa Plain is home to the second-largest wildebeest migration after the Serengeti).

Photographing animals in the rain at night gave me the opportunity to use another technique. I positioned an off-camera flash behind my subject and pointed it back towards the camera to backlight the raindrops.

These shots were challenging because I had to place the flash and line up the shot without spooking the animals. I also had to compose and focus in complete darkness, while trying to keep the driving rain off my gear. Needless to say, I got very very wet! 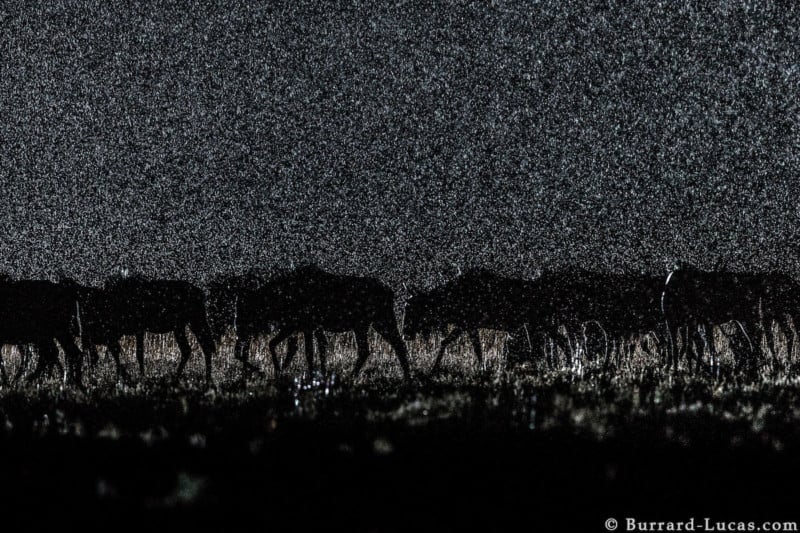 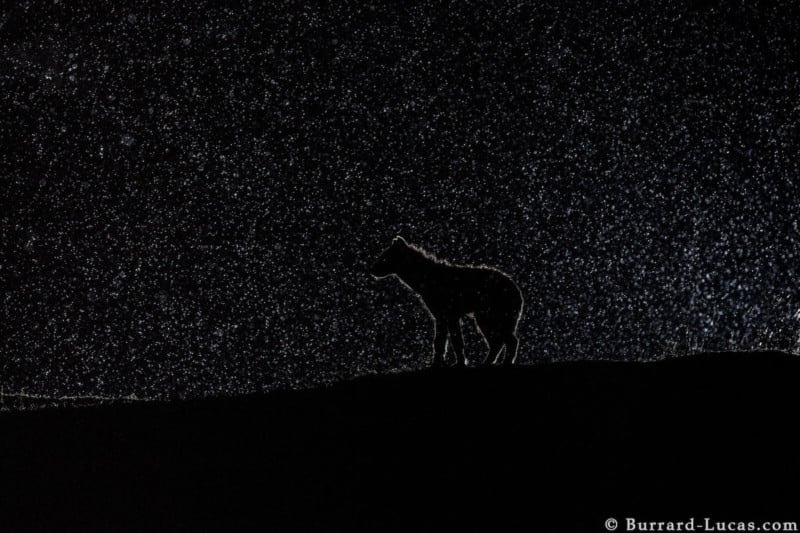 The rains were accompanied by some epic lightning storms so I set myself the challenge of photographing an animal in front of a bolt of lightning. One evening I noticed a huge storm approaching so I went in search of a suitable subject.

I found a hyena and lined it up with the storm. I then took back-to-back long exposures hoping that a lightning bolt would eventually strike in the right spot and silhouette the animal. The hyena was moving so keeping it lined-up with the storm (again in the pitch darkness) was challenging but my perseverance was rewarded with the shot below. 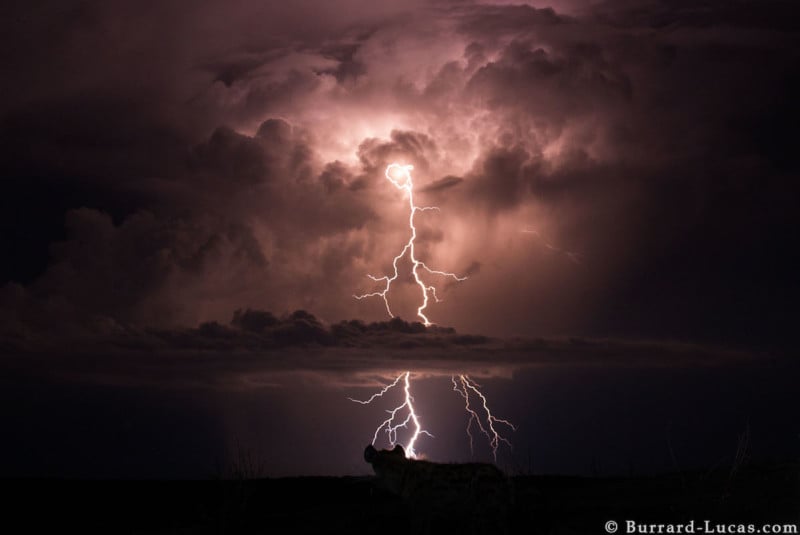 So what next? Well there are many other creative ways that remote cameras and camera traps can be used to photograph wildlife at night! I will be exploring some of these in future projects.