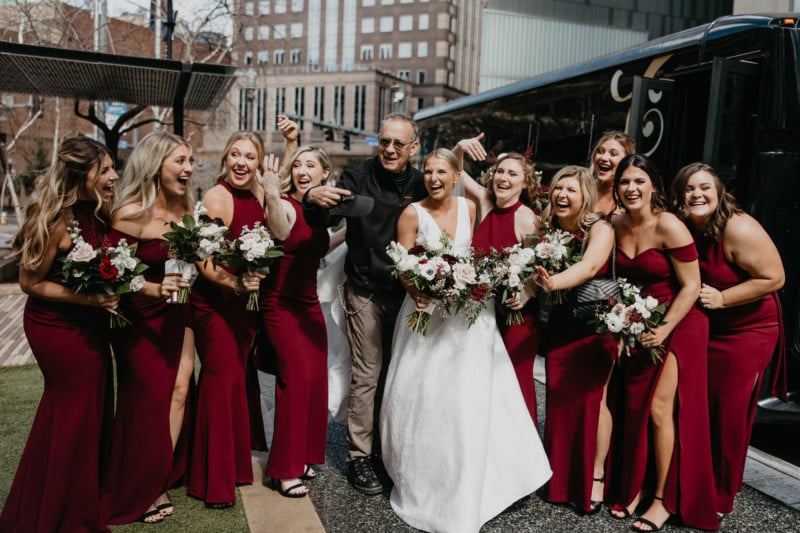 A bride was treated to an unexpected encounter with Tom Hanks when the famous actor bumped into the wedding party as they exited their downtown Pittsburgh hotel en route to the ceremony.

Hanks, who is currently in Pittsburgh filming the movie “A Man Called Otto,” ran into the group as they were exiting the Fairmont Hotel. Grace Gwaltney, the bride, was about to enter a waiting limousine when the actor came up behind them.

“We were leaving the hotel (he is staying there while filming a movie here) and getting on to the limo when he literally ran up behind the bride,” she tells PetaPixel.

“We were all pretty shocked and I just started snapping to get some good candids. He said, “my name is Tom Hanks! Can I take a photo with the bride?” and just joyfully laughed and posed.”

Hanks’s wife, Rita Wilson, was also present and Rowland says she encouraged her to also join in the photos, who obliged them.

Rowland says that she did her best to react to the completely unexpected moment and managed to get a few photos before Hanks said his goodbyes and took off.

“We all lost it,” Rowland continues. “The bridesmaids shuffled out of the limo, and he posed with photos and congratulated everyone, and then as fast as he popped in, he was gone. It was just so sweet and fun!”

In an interview with KCRA, Gwaltney says she was caught off guard by the encounter and froze, unsure what to do. She was so surprised by the incident she wasn’t sure it was him at first.

“It’s his voice, I think,” she says. “You see him and then he starts speaking… He was talking in my ear and I’m thinking of Toy Story.”

Gwaltney says she couldn’t wait to tell her soon-to-be-husband about the encounter and while they were facing back to back for their first look, she whispered that she had just met Tom Hanks.

“I had to sneak that in!” she says, laughing. “I’m sure a lot of other Pittsburgh brides would love to have him photobomb their shots,” Gwaltney adds.

No doubt, Gwaltney will have no trouble remembering her wedding day.