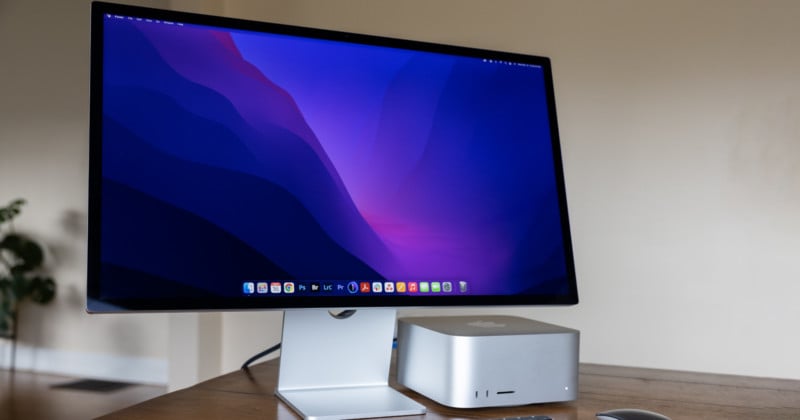 The reviews for the Apple Studio Display have started to come out and one unexpected complaint centers around the webcam, which some have categorized as disappointing. Apple says it’s not “behaving as expected” and intends to fix it with software.

The Studio Display is Apple’s second monitor in its lineup and is a 27-inch panel that looks akin to what was shipping with the company’s iMacs before it unexpectedly discontinued the series not long after the Mac Studio was announced. The screen itself is a 5K retina display with “support” for 10 billion colors through its 14.7 million pixels at 218 pixels per inch. Apple says it is color accurate and supports true tone, and for users who are in bright environments, the company’s nano texture anti-reflective glass is available as an option.

Unlike many monitors it will compete against, the Studio Display includes a 12-megapixel webcam that supports the company’s Center Stage feature as well as speakers, both of which are controlled with a standalone A13 Bionic chip.

In reviews, the display is performing about as expected, except for the webcam. The Wall Street Journal’s reviewer Joanna Stern, in particular, found it to be underwhelming.

You can be the judge of the webcam quality. More shots in my video: https://t.co/lYQjFnqFI9 pic.twitter.com/sEWkpDIs7t

The Verge’s Nilay Patel agrees and goes as far as to say its quality is “very, very bad.”

I was also tasked with reviewing the new Studio Display which… well it’s a 60Hz panel with no local dimming or HDR and that A13-powered webcam looks very bad. Very, very bad. https://t.co/bMudOPvglG pic.twitter.com/5pSXheU3Xc

Apple did not respond to PetaPixel’s request for comment ahead of publication, but an Apple representative did tell Stern that it did not appear like the webcam was performing as intended.

“We discovered an issue where the system isn’t behaving as expected. We’ll be making improvements in a future software update,” the representative says. The company has not provided an expected timeline for a fix, but the company tends to address issues like this rather quickly.

PetaPixel is still working on its review of the display and will keep these issues in mind ahead of its publication. For those looking at alternative options to the Studio Display to use with the excellent Mac Studio, a list of great choices can be found here.