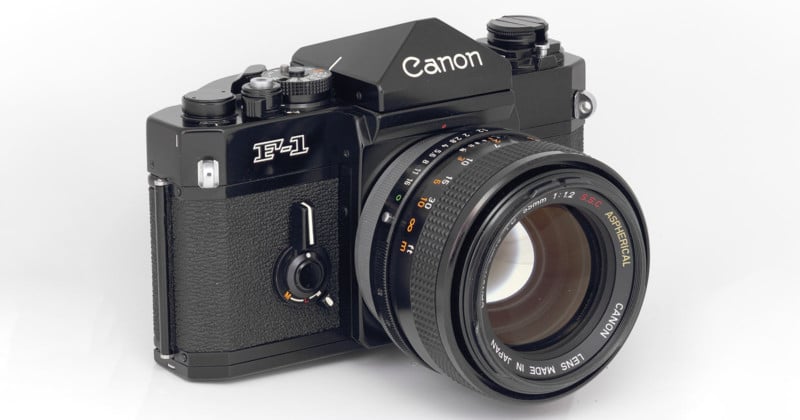 Cameras are expensive, and Canon is no stranger to hiking its prices when it sees fit — the EOS 1D X Mark III flagship DSLR costs a fairly sizeable $6,500. But has it always been this way?


In this article, we will explore which of Canon’s pro-grade cameras — starting with the F-1 in 1971 — cost the most and which were surprisingly affordable.

A Brief History of Canon

Canon was founded in 1933 as a camera manufacturer, and the company predicated its first model — the Kwanon (and later the Hansa Canon) — on the Leica II, but it was slow out of the starting gates to produce a professional-grade model. That’s not to say it wasn’t innovative – it was – but when Nikon released the high-end F in 1959, Canon’s own SLR, the Canonflex, was no match.

In fact, to be fair to Canon, it was never designed to be a match. The company was more interested in servicing a broader range of products, to a wider audience, in order to build the business; in short, the pro-grade model was a small market in relation to the burgeoning amateur market and could wait.

The Canonflex was still a good camera, built to a high standard, but it followed a similar trajectory to other manufacturers, such as Pentax and Minolta, in pushing out 35mm SLRs but not necessarily complete systems. The Canonflex came armed with the R-mount, which morphed into the FL-mount in 1964 and then the FD-mount in 1971 with the release of the F-1.

It was the release of the F-1 that was transformative for Canon: a high-quality body, supported by a forward-thinking mount and full range of accessories allowed them to compete with Nikon.

But what makes a camera “pro-grade”? Simply put, it’s a camera that can service the needs of the hardest-handling professionals and so is constructed to the highest standards. However, it also means that there is a range of accessories to meet every conceivable need and, in particular, lenses that offer the best-in-class performance across the full range of focal lengths.

When the Nikon F was released there were nine lenses available from day one and this grew rapidly. For the digital camera era, this has meant they are designed for quick shooting with fast auto-focus tracking, excellent low light performance, and often with portrait/landscape grips for mixed-mode shooting.

Canon released the F-1 with a price tag of ¥78,000, or about $678. Unfortunately, you can’t just compare historical launch prices for two reasons. Firstly there is the exchange rate between currencies, which varies over time. Then there is the effect of the general rise in the price of products year-on-year (or inflation) means that that $678 price tag for the F-1 is not comparable to the 1D X!

Now while you can’t state exactly what a 1971 product is worth today, we can estimate it using a generic price index. I’ve picked the US Bureau of Labor Statistics “Consumer Price Index (1967) for All Urban Consumers” as the best option and then calculated the 2020 equivalent prices for all of Canon’s pro-grade models. For these, I’ve pulled the list prices from a range of places, including Ken Rockwell and Wikipedia.

What the chart below shows is how remarkably affordable the F-1 was at $1,600 when it first came out.

However, it was the dawn of the new millennium and the arrival of digital that saw the real price hikes arrive. In fact, it’s worth saying that these — in camera terms — were astronomical price hikes!

The 1DS line was the pinnacle of Canon’s range both in terms of features and price, but that trend was downward since its first appearance and eventual merger with the 1D line in the form of the 1D-X, where we see the price stabilizing at the $6,500 mark. This is also the price Nikon has hit with the D6 (with the D5 and D4 only slightly higher), which is why the appearance of the Z9 at $5,500 is such a line in the sand — it marks a genuine reduction in prices that we haven’t seen before in the digital era.

Note that I’ve included the R5 on the plot above, although in terms of features, price, and, indeed, designation, it can’t be considered “pro-grade”. If the “R1” indeed lands in 2022, it will be fascinating to see its features, but perhaps more importantly how it will be priced. Factor in the ongoing chip shortage in the sector and it will make the year eventful if nothing else.

So what is the cheapest pro-grade camera Canon released? Undoubtedly the F-1, which was remarkably affordable for the period as Canon tried to pull in consumers to its system and brand. What’s surprising about Canon is that none of its digital models stand out as being “cheap” — presumably a result of cameras evolving from mechanical devices into high-tech imaging and computing devices.

Sure, Canon’s original 1D, 1DS models, and 1D X were all expensive, but every other digital model has been close to the $6,000 mark. That is actually a little cheaper than Nikon has managed to offer prior to the Z9. It remains to be seen how Canon will respond.