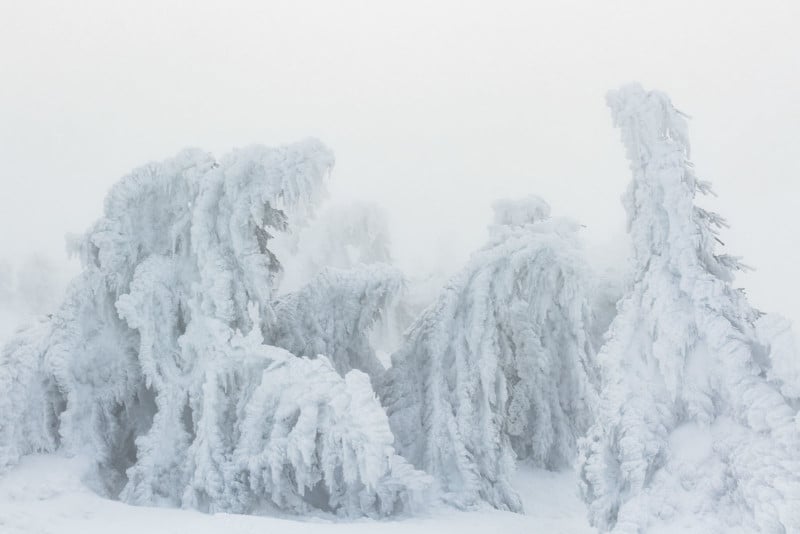 Jan Erik Waider, a fine art photographer from Hamburg, has captured monster-like formations created by snow and ice blanketing the evergreen vegetation in the upper reaches of the Harz Mountains in northern Germany.


Waider was hiking a region of the mountains last month for the first time with a friend when they discovered these fantastical “creatures of sorts”. He immediately knew he had to come back with his camera and create a new series. Waider normally focuses on atmospheric and abstract landscape photography of the North in Norway, Iceland, Greenland, and beyond. 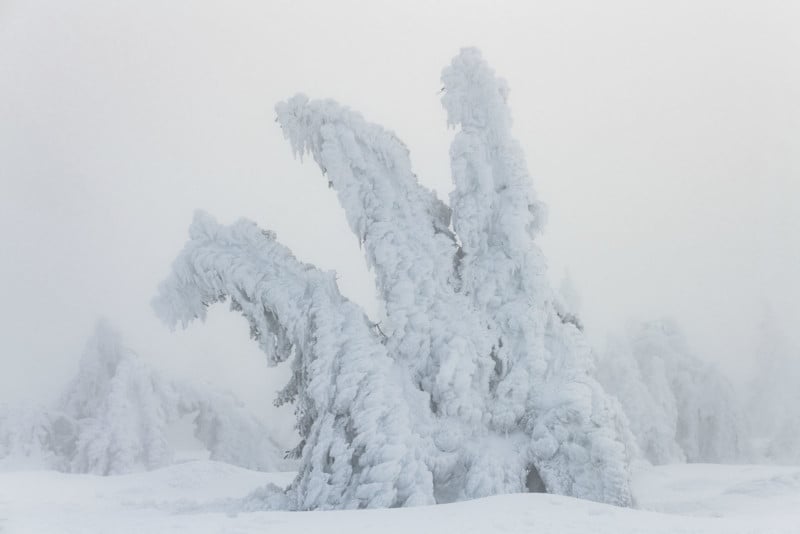 The location is only three hours from Waider’s home in Hamburg. This proximity allowed him to monitor the weather closely and head out when the conditions were suitable for his type of imagery. 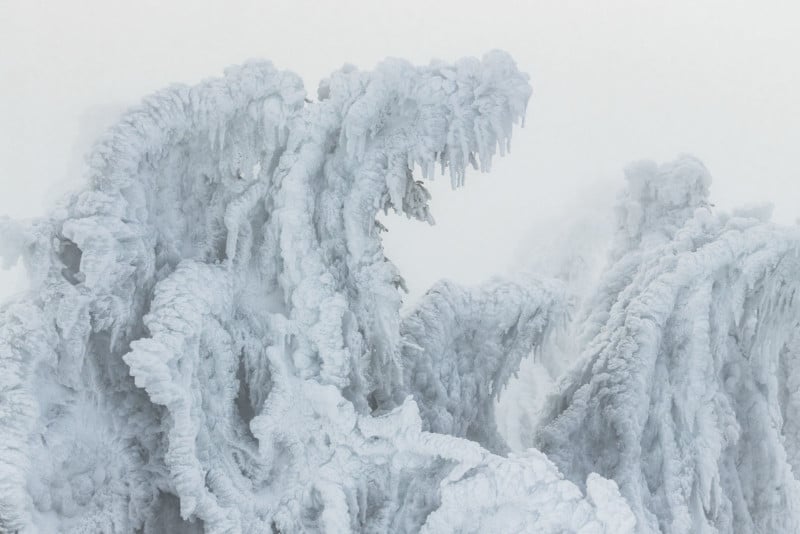 For the Love of Foggy Weather

“The peak above the tree line tends to have a snow cover from September to May, and mists and fogs shroud it up to 300 days of the year,” the Wikipedia article for Brocken states

These weather conditions were perfect for the landscape photographer who preferred cloudy days for the misty mood rather than a sunny one for this project. That way, his out-of-the-world beasts would be imparted with the perfectly surreal environment.

“I love the monochrome feeling and the special soft light,” he explains to PetaPixel. “A blue sky would have ruined that for me.” 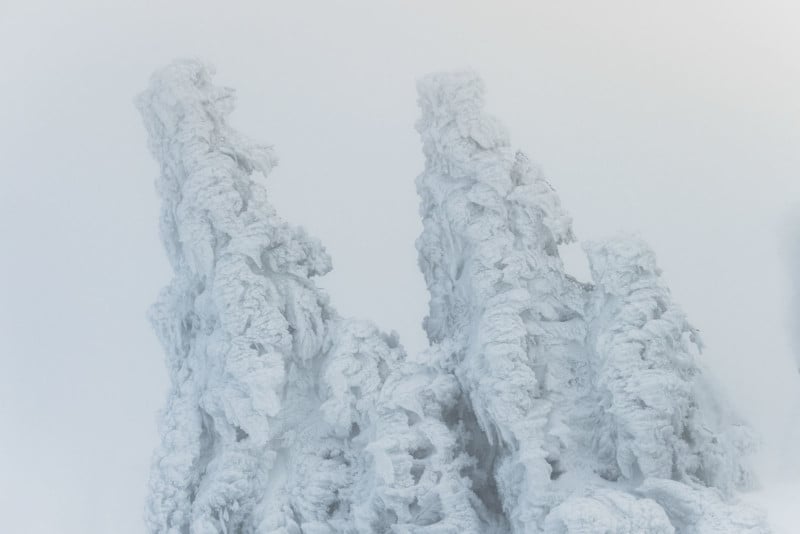 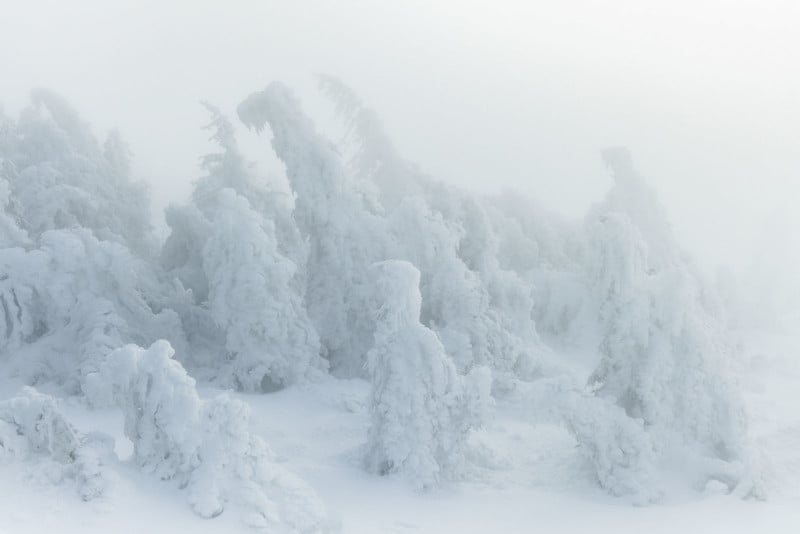 “I like the muted sounds and the seemingly endless variations of gray that come with fog,” the photographer tells Colossal. “I can wander for hours as the winter landscape changes and recomposes itself almost every minute.” 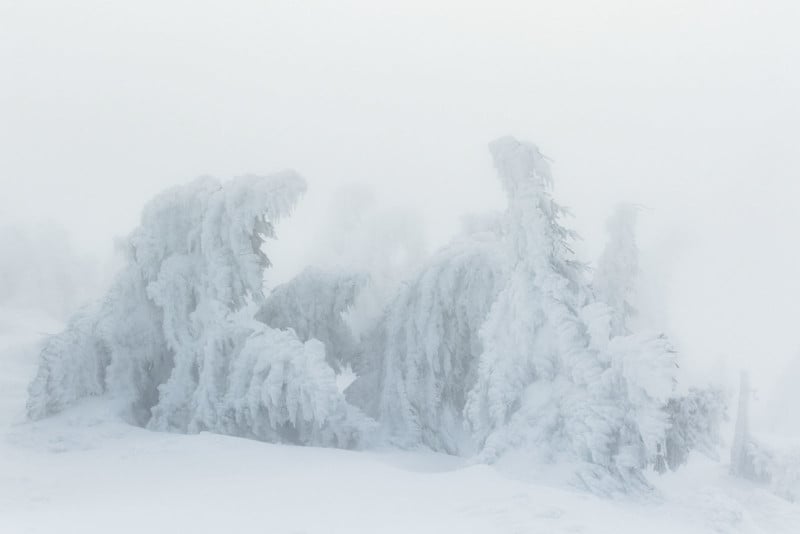 The Gear and Getting it up the Mountain

The photos were made with a Nikon D850 DSLR, AF-S Nikkor 70-200mm f/2.8E FL ED VR, and AF-S Nikkor 500mm f/5.6E PF ED VR, which are his typical lenses, along with the Tamron SP 90mm f2.8 for macro photography. He also sometimes takes along the Nikkor 50mm f/1.4 and some additional lenses for specific jobs, but the above are always in his camera bag.

His relatively large camera kit results in a Lowepro ProTactic BP 450 AW II camera backpack that’s “really heavy” to carry around on outdoor adventures, but having the gear at his disposal gives Waider flexibility when shooting his projects.

Luckily for the photographer, the hike up this particular mountain is not too challenging and does not require any special climbing gear, just food and water, though it is a 4-5 hour trek from where his car is parked. He did not need to lug along a tripod as there was plenty of light and reflections from the snow, and he did not want to experiment with long exposures.

You can even take an old steam train up the mountain if you do not feel like doing a long adventure on foot. 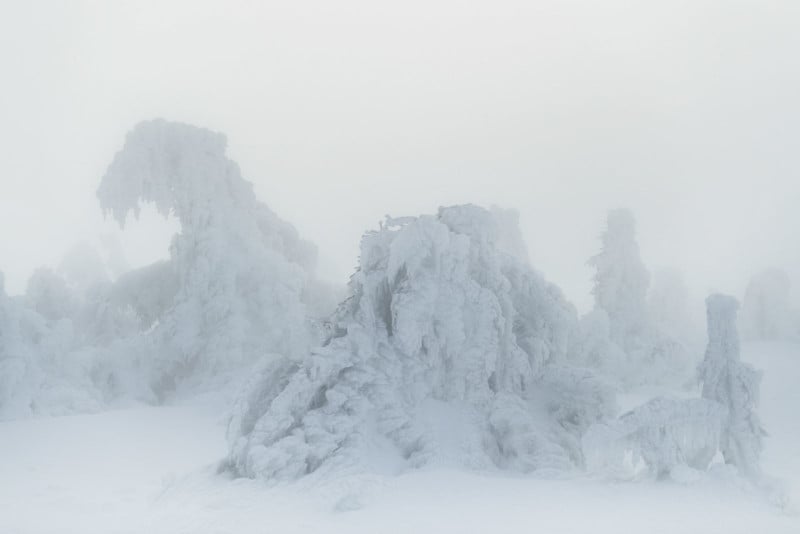 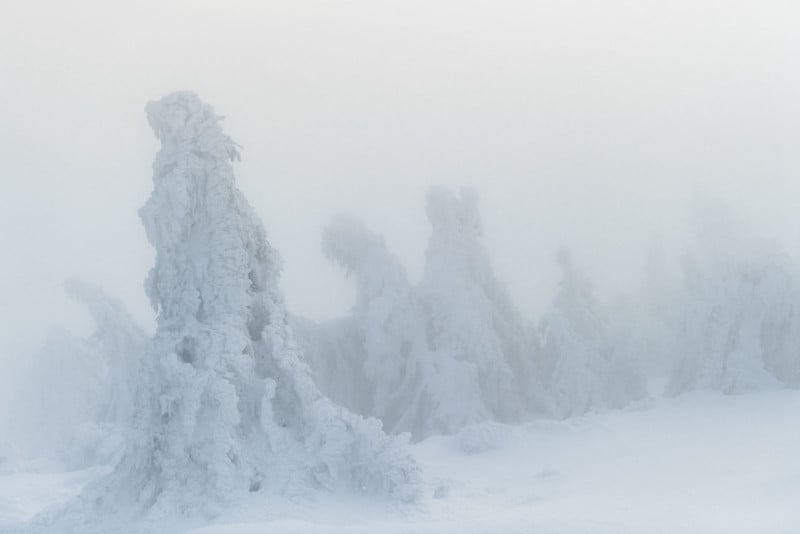 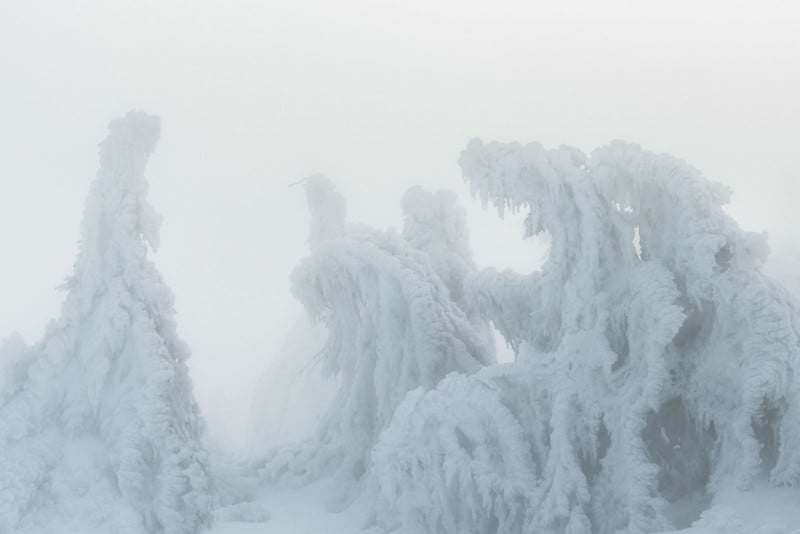 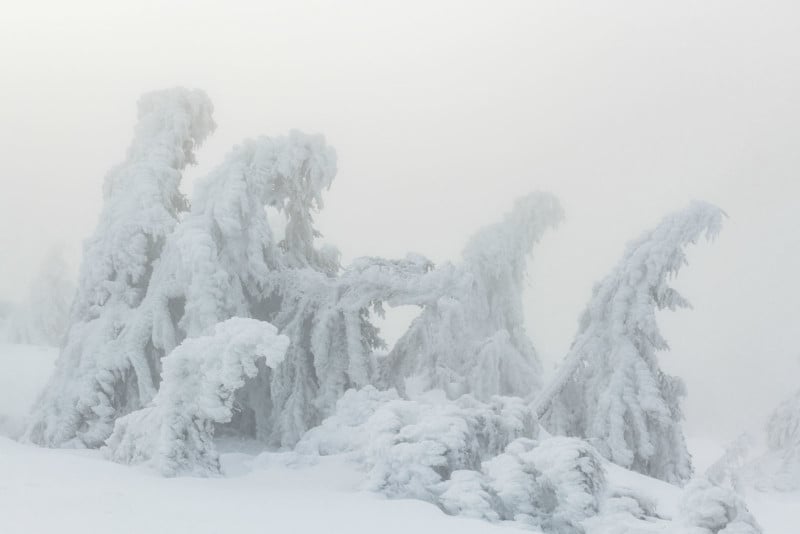 Waider shoots in RAW to get the “most flexibility and quality” and then adjusts in Lightroom Classic on Windows but makes sure he dials in a suitable white balance to have a result on the LCD screen that is not too far off. He uses his own presets based on high-key elements from his polar landscapes, which are available for purchase on his site.

“I love the editing process, and I don’t limit [timewise] myself,” says the photographer. “Some series take longer than others. This one was pretty straightforward since I had the idea pretty much laid out in my head.

“On the Nikon D850, I always pay attention that no highlights are blown out, and I tend to underexpose almost every scene.” 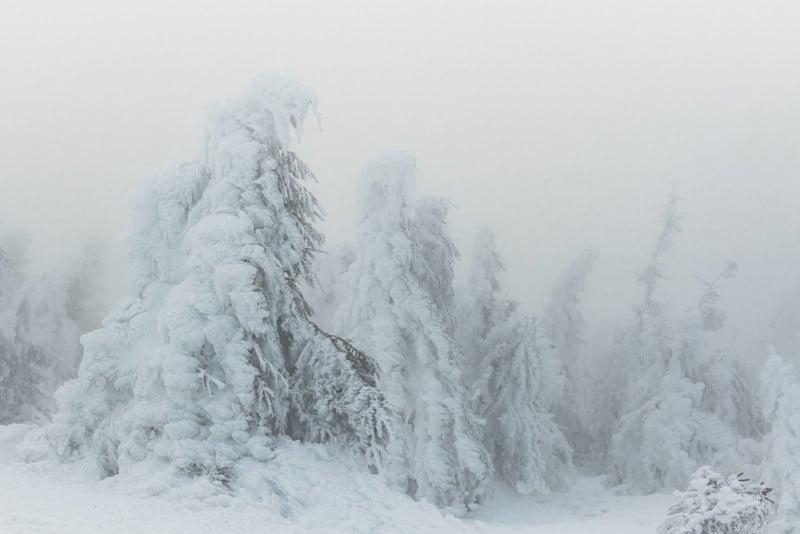 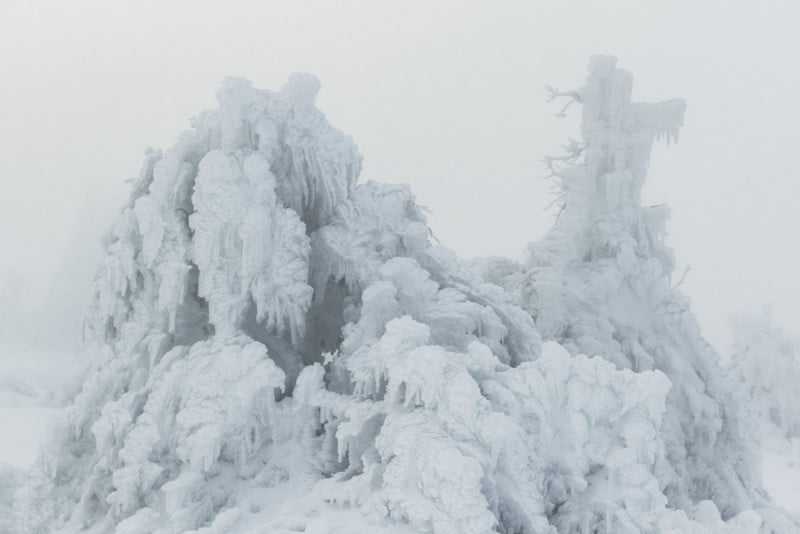 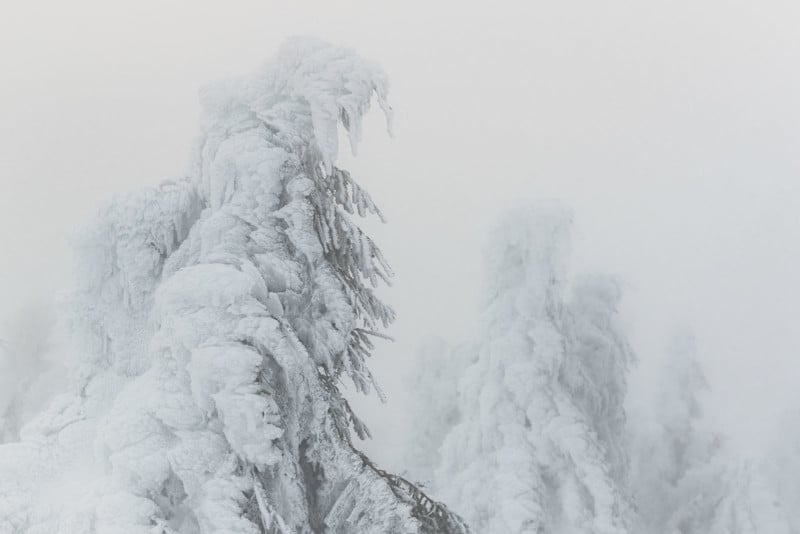 We asked Waider, a full-time pro who started in photography ten years ago, what is his favorite kind of landscape subject.