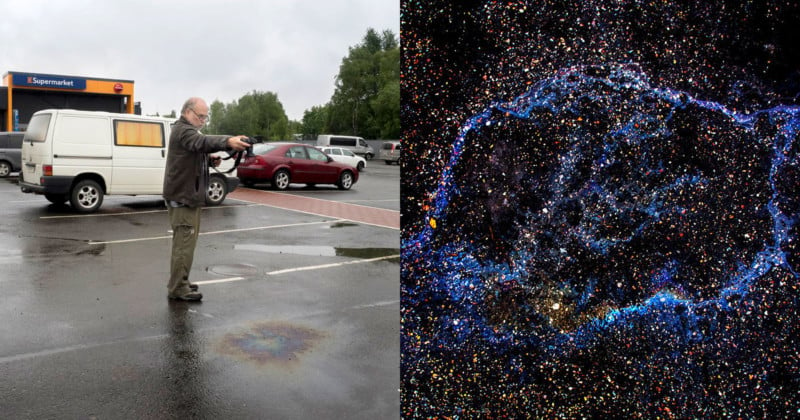 Finnish photographer Juha Tanhua has been shooting an unusual series of “space photos.” While the work may look like astrophotography images of stars, galaxies, and nebulae, they were actually captured with a camera pointed down, not up. Tanhua created the images by capturing gasoline puddles found on the asphalt of parking lots.


“I didn’t look up but down when I took these photos,” Tanhua tells PetaPixel. “I just watch the movie Don’t Look Up. Strange, but I think I managed to take a photo of Comet Dibiasky a couple of years ago in Finnish Lapland 200 miles north of the Arctic Circle.

“Lapland is the perfect place to take photos of galaxies, nebulas, and other space objects because there is really not much light pollution. But I didn’t point my camera up to the sky, but down to the asphalt. In a broad daylight.”

“It’s not space above us, it’s space under our feet.”

Capturing Galaxies in a Parking Lot

The 62-year-old photographer lives in the small village of Vuolenkoski in Southern Finland, and he has had a long career in photography, both as a photojournalist for newspapers and as a fine art photographer who has had over 10 solo exhibitions over the decades. His photos are found in the collections of the Finnish National Gallery and the Lahti Art Museum.

“When I was parking my car in Fellman Park in Lahti City to take some photos to [a] newspaper, I noticed that next to my car there was an oil spill on the asphalt,” he says. “It looked a little bit like northern lights. I took a couple of photos and forgot the whole thing.

“Months later, I found that photo again when I was organizing my archive. After that, when I was walking in parking lots after rains, I started to see these oil spills. I named them oil paintings because it looked like oil and gasoline leaks and maybe even windshield washer fluid creates real artworks under cars.”

Since that first photo made in 2005, Tanhua has shot hundreds more photos for the ongoing project.

“I found a microcosm under parked cars,” Tanhua says. “Oil and gasoline leaks and maybe even windshield washer fluid creates with rain ‘oil paintings’ under cars.”

Whenever Tanhua finds a suitable oil or gasoline puddle after some rain, he stands over the spot, holds his camera at arm’s-length pointed straight down, and captures a photo with nothing but the puddle and the surrounding ground in the frame. 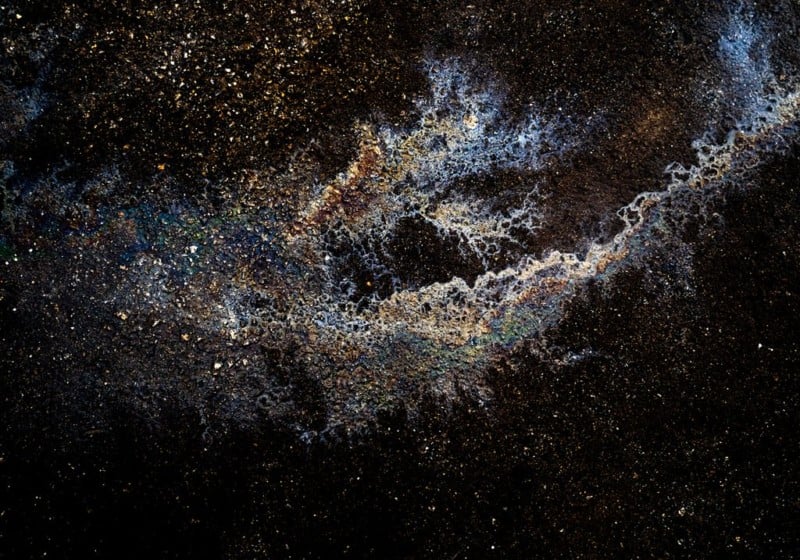 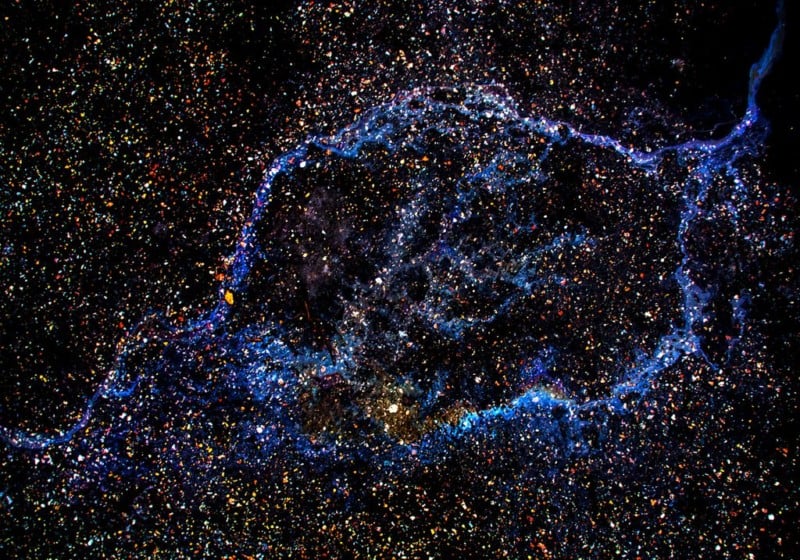 While Tanhua originally aimed to capture faithful representations of exactly how each puddle looked with minimal editing, these days he experiments with tweaking contrast and highlights in order to bring out galaxies, comets, and nebulae.

His project is titled Hubble? No! James Webb? No!. 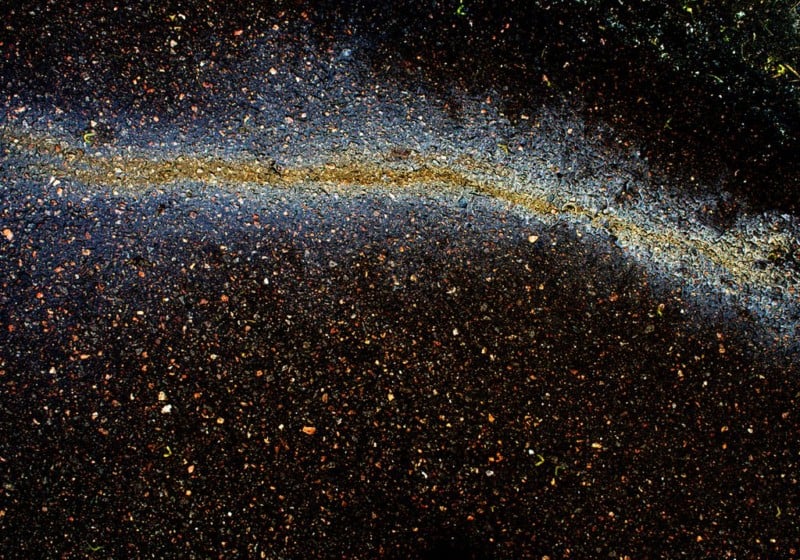 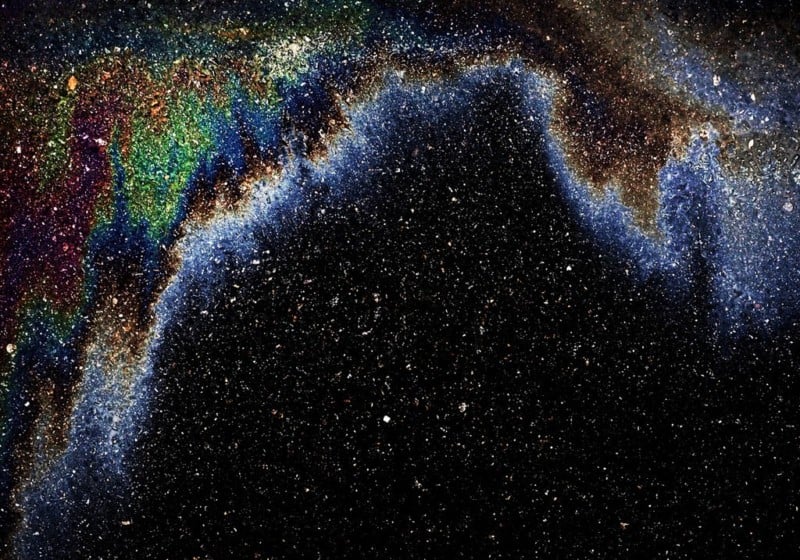 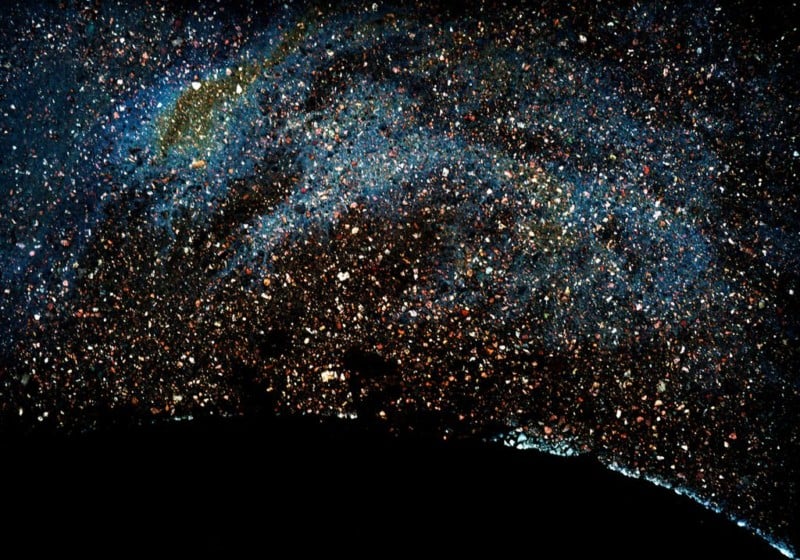 You can find more of Tanhua’s work on his website.