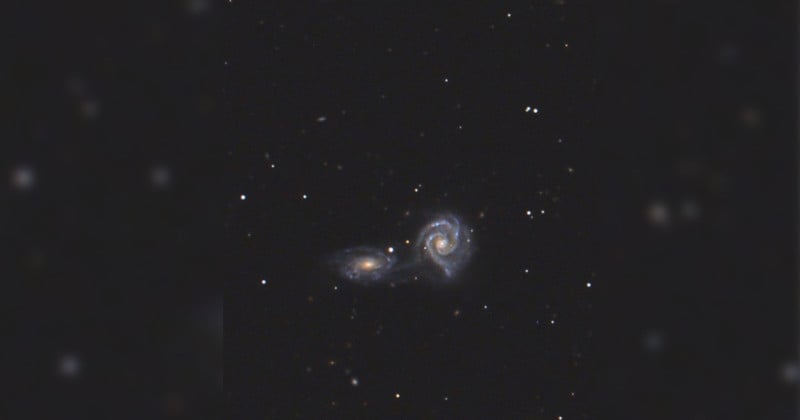 Astrophotographer Brandon O’Meal managed to photograph a pair of colliding galaxies that exist about 130 million light-years away from his backyard.

Speaking to PetaPixel, O’Meal explains that how he uses a Skywatcher EQ6 Pro Mount to track objects through the night sky for long exposure photography.

“I shoot with a few different scopes but I shot that and a lot of my stuff with a Celestron Edge 8 Schmidt Cassegrain telescope,” says O’Meal.

O’Meal uses two Asi071mc color CMOS cameras that are able to cool during long exposure photography and an off-axis guider that he uses to keep the telescope “even more steady” for those elongated exposures.

“I used a UV/IR filter to keep the stars from blowing out on the image as well,” he adds. 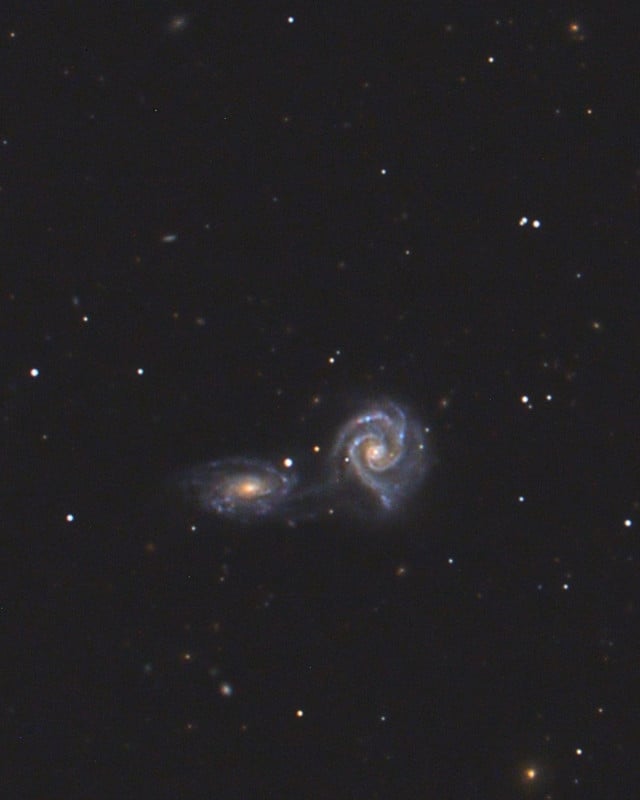 O’Meal captured the NGC 5426 and NGC 5427 galaxies colliding by shooting a “multitude” of five-minute exposures and stacked them to bring out the faint details.

The two far-away galaxies in the constellation of Virgo attracted O’Meal because of the difficulty of obtaining the image.

“I wanted to shoot that specific target, I find it unique and tougher to shoot due to its size and distance. Also, the interaction is fun to see.”

“The spiral galaxies are passing dangerously close to each other, but each is likely to survive this collision. Typically when galaxies collide, a large galaxy eats a much smaller galaxy,” NASA explains.

“In this case, however, the two galaxies are quite similar, each being a sprawling spiral with expansive arms and a compact core.

“As the galaxies advance over the next tens of millions of years, their component stars are unlikely to collide, although new stars will form in the bunching of gas caused by the gravitational tide.”

The Milky Way Galaxy will undergo a similar collision with the neighboring Andromeda Galaxy in an estimated five billion years’ time. But Earth is predicted to be unharmed.

O’Meal has only been shooting since February of 2019 and says he’s always been into stars and planets.

“When working in a local hospital I saw two doctors I worked with who took photos of the night sky looking like Hubble pictures. I was very intrigued so I wanted to try capturing similar photos.

O’Meal has since upgraded his kit and is riding high on TikTok with over 128,000 followers and a video with over two million likes.

More of O’Meal’s work can be seen on his TikTok and Instagram.