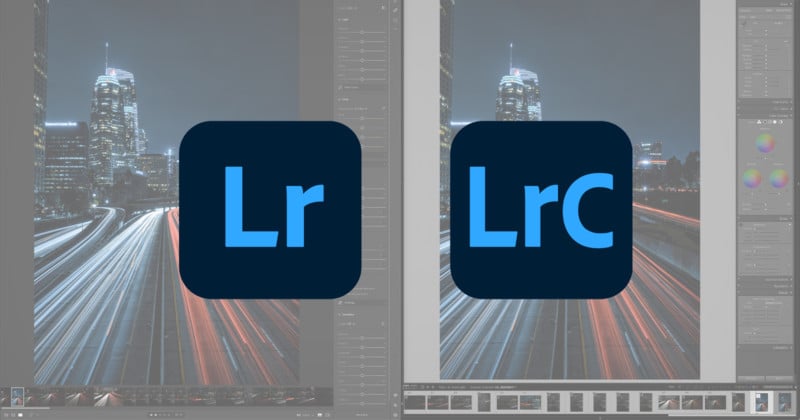 When Lightroom CC originally launched it was woefully behind Classic from a features perspective. Photographers who had come to expect certain tools and performance were greeted with an underpowered CC, and few gave it a second glance after that. But now, nearly five years later, those same photographers might not know that they are nearly identical now. So then, why do we have two versions of the same software?

Confusing, to be sure.

That split in 2017 immediately caused many to worry that Adobe was going to end the Lightroom experience many photographers had come to rely on. Those same photographers weren’t looking forward to Adobe’s new Lightroom CC either, as the platform was not nearly as robust as the newly-named Classic had become. Quite the opposite really: it was downright inadequate for power users.

Adobe kept its promise. Over the course of the next five years, it would co-develop the two platforms side by side. Classic, which for years was maligned for being slow and only getting slower, managed to turn that perspective around. There was a time that the Lightroom brand was synonymous with slow, but in 2022 it is a complaint that is rarely raised. At the same time, Adobe’s Lightroom teams have made both CC and Classic more robust and added multiple new features.

According to Sharad Mangalick, Adobe’s Photo Product Manager (which includes Adobe Camera Raw, Lightroom, and Lightroom Mobile), CC launched in such a bare-bones manner on purpose.

“When we rolled our Lightroom CC, photographers would have been right: it didn’t do as much as Classic did. We purposely made the product less feature-heavy so we could understand what people actually need,” he says. “It was a strategic choice that we made. The challenge now is a number of years later, people only remember the original rollout only remember that it was underpowered back then, not what it is now.”

What few photographers probably have realized is that in addition to speeding up classic and giving it new capabilities, Adobe has also managed to bring CC up to feature parity with Classic.

Today, the editing suite is nearly identical across both applications — as far as what a photographer can do to edit a photo, there is no appreciable difference. So why are there two programs, and what’s the plan for the future?

The only editing-based difference between Classic and CC is that CC does not have the Camera Calibration panel, but most of what an editor can do there can be done elsewhere in the editing stack. For Adobe and the Lightroom team, from an editing perspective, the two programs have reached feature parity.

Adobe never planned to retire Lightroom Classic, despite what some feared, Mangalick says. He tells PetaPixel that the goal has always been to build and innovate both products together.

“[Lightroom Classic and Lightroom CC] were built to solve different needs,” he tells PetaPixel. “With Lightroom Classic, the assumption was that everything that would be edited was on a photographer’s computer.”

That base assumption is the core of what makes Classic and CC different. On Classic, the platform assumes that photographers are going to have access to the photos they want to edit on a local machine and doesn’t lean on cloud storage to do so. Lightroom CC is the opposite. Because it works across platforms, the assumption is that those files won’t necessarily be on the device currently in use, and leans more into cloud storage as a result.

These perspectives directly relate to the small differences between the two.

“So you’re going to have a print, slideshow module, and FTP to a website [in Classic]. Because of the timeframe Classic was developed, there wasn’t Facebook and social media so these are a kind of carryover from that time,” Mangalick explains. “With Lightroom CC, we haven’t built those into the product because the needs of what people are using are different than when Classic was built. That’s not to say we won’t add more things to CC to shorten that gap, but we look strategically at what people need, what photographers are telling us, and where the industry is headed.”

This mentality is also why Lightroom CC lacks the ability to work with plugins in the same way that they do in Classic.

“Plugins do work in CC, but they not in the way they work in Photoshop and Classic,” he says. “How do you plug in to a cloud ecosystem from a desktop app? When you look at what most of the plugins do, many of them are a publish service like with SmugMug or Flickr. The vast majority that are used are trying to answer the question of, ‘how do I get photos from Lightroom to a third party service?’ Rather than doing it locally through a plugin, we have cloud APIs that connect to an Adobe Account with a third-party account and connect them that way.”

Mangalick says that he has an issue with the mindset of the plugin when it comes to a multi-platform, cloud-based software like Lightroom CC.

“I do still have some concern with the mindset of a plugin that only works on one platform really negates a lot of the benefit of the cloud nature of CC, and that’s one of my hesitations of building a siloed plugin architecture that doesn’t talk to the rest of the ecosystem,” he says. “That’s more of an Adobe thing that we will have to figure out if and when we do build an SDK, but that is just one of the concerns that we would have to work through.”

That makes sense, but also limits CC’s ability to work with third-party hardware. In PetaPixel’s recent review of the TourBox Elite controller, one reader pointed out that few, if any, publications — PetaPixel included — mention that the tool isn’t compatible with Lightroom CC.

He is right, and for now, Adobe doesn’t plan on changing that.

“They’re not supported, but it’s something we’re talking about. There is nothing preventing us from doing it, but we haven’t heard the demand for it, maybe not as loudly as [PetaPixel] has,” Mangalick says.

“We talk to Loupedeck, we meet with them once a year or more,” he says, as an example. “But building out a desktop SDK [for Lightroom CC] for hardware vendors just hasn’t bubbled to the top, but it’s something we can look into.”

For newcomers who might not see the difference between the two programs and who may wonder why they aren’t just one program and for veterans who haven’t given CC a second look since 2017, Lightroom’s dual-software ecosystem might not make sense. But there is a method to this that Adobe’s Lightroom team is confident is an important distinction.

Photographers, especially those who are new to Adobe or Lightroom, can be easily confused by the two options. Lightroom Classic and Lightroom CC, sound negligibly different — if at all — and deciding which to use can be a pain point. But Adobe, and Mangalick, argue that this one speed-bump for new users is worth it in the end to support two products that are designed for similar, but fundamentally different, workflows.

“What Lightroom does and how it works versus Classic [was a decision made because] they were built to solve different needs,” Mangalick says. “Editing feature parity is there, it just comes down to editing workflow and how a photographer chooses to store their photos. This may seem minor, but to someone who puts a lot of stock into how they store their photos and access them, it isn’t.”

For seasoned Lightroom Classic veterans, hearing that both CC and Classic are appreciably the same from an editing standpoint might be news to them. While there is most certainly a benefit to the desktop-based, single-computer workflow of Classic, the cloud-based architecture of CC might have value. Those who haven’t taken a look at CC in five years might find the program is more useful to them than they thought.

But — and this is important — there is no pressure for either Classic or CC users to change what they are doing and how they are using each because the programs will continue to be developed in parallel.

“There are no plans to do anything different,” Mangalick says regarding the future development of both platforms. “Both Lightroom Classic and Lightroom CC have been extremely successful. They both have reasons for existing, and even new customers are making their choice and we’re here to support them in whichever choice they make.”