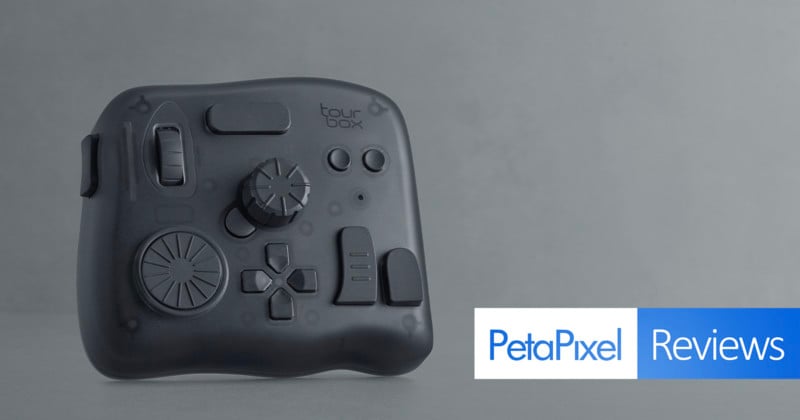 The TourBox Elite has been the subject of a lot of attention since the launch of its Kickstarter and with the crowdfunding campaign coming to a close, we decided to take a closer look at it to see if it’s worth your backing.

Disclaimer: Make sure you do your own research into any crowdfunding project you’re considering backing. While we aim to only share legitimate and trustworthy campaigns, there’s always a real chance that you can lose your money when backing any crowdfunded project. PetaPixel was provided a loan of the TourBox for the purposes of this review but is not an affiliate of the campaign. This review serves simply to evaluate the performance of the device should the company deliver an identical product to backers.

Having worked with several other external editing consoles before, I figured it was worth giving this little box a try to see how useful it was with applications like Adobe Photoshop, Adobe Lightroom, Capture One Pro, Final Cut Pro X, and the many others it can support (it can even be used as a MIDI controller). Plus, since the device has racked up over $420,000 from backers, clearly a lot of people really like what it can do, and I wanted to experience it for myself.

Keep in mind, I have not used the previous generation of TourBox consoles, so the Elite version is my first experience with the system. Out of the box, the Tourbox Elite had a lot more weight to it than I expected; it weighs in at just under a pound (425.7 grams with the batteries included, to be precise).

Despite the game-controller look of the device, it is surprisingly sturdy and durable all around, save for the battery door. With the heft of the design, the batteries and tray door of the pre-release model I evaluated popped off pretty much every time I picked up and moved the console. It seems the device’s own weight is enough to trigger the compartment open even when placed down gently, something which users should be aware of unless TourBox addresses this before shipping finished units next year. For the duration of my testing, I simply placed some gaffer’s tape across the bottom of the device to ensure the battery tray was only going to open when I wanted it to. 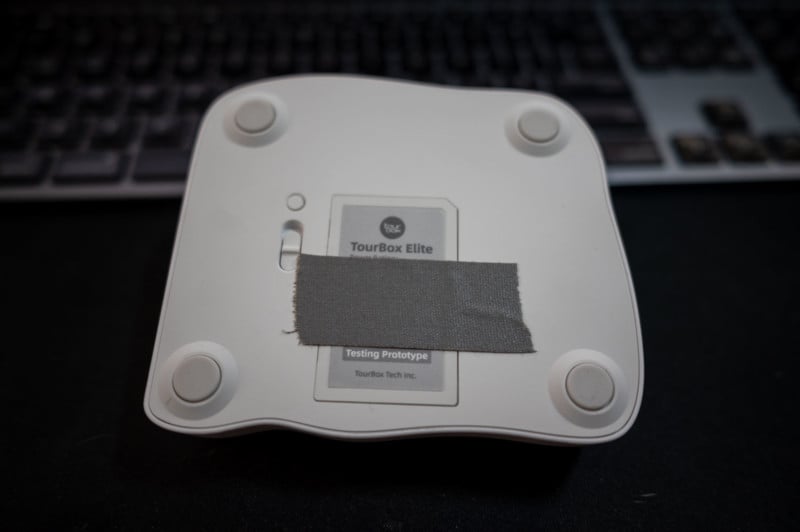 It doesn’t take a lot of searching to find that many of my colleagues in the industry have enjoyed working with TourBox consoles. On the exterior, not much has changed from the previous generation of the device and everything looks nearly identical outside of the shape of some of the buttons and the battery door on the bottom of the device (the previous version was not wireless), but there is still a little more to be discovered.

With this version of the console, the developers have listened to the user feedback and added a dual-channel Bluetooth functionality and even went so far as to add haptic feedback to the device.

Looking at the TourBox Elite for the first time, the layout appeared to me like a random hodge-podge of wheels and levers, especially when compared to some other consoles I have tested like the Loupedeck and Monogram “Palette” systems. In a design that is a little bigger than an average adults’ palm-size comes a series of quick-access controls, dials, and buttons that can be completely customized to adapt to each user’s individual preferences. 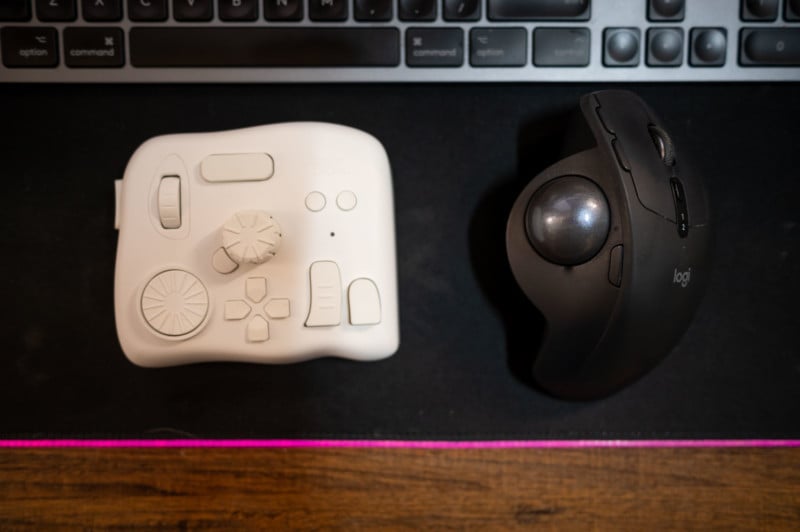 According to the company, the deck is designed to be operated “individually or work alongside the mouse and drawing tablets, to complement and streamline your daily workflow.” While the design and demos seem to favor usage by right-handed users, the placement of a lot of the buttons on the device seems to imply that it can be quickly adjusted to accommodate left-handed users also, especially since the main jog-dial is located dead center of the device making it easy to access no matter which hand is operating the console. 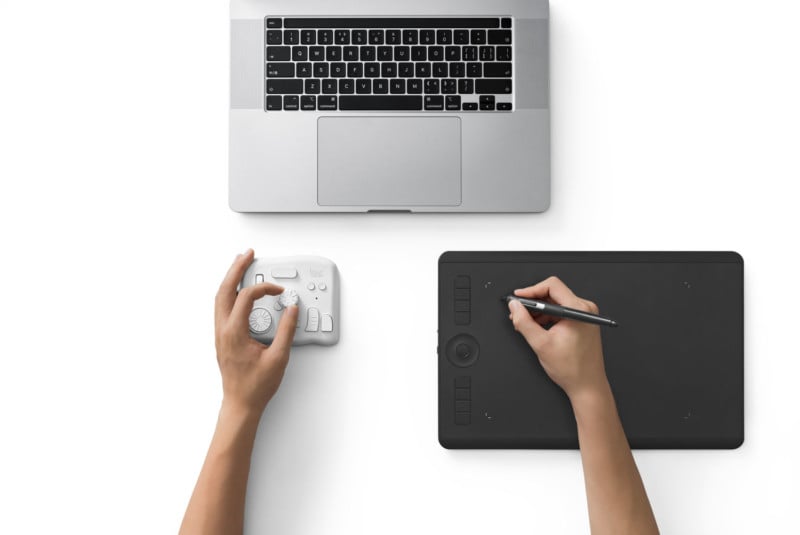 By the numbers, the device has a scroll wheel, adjustment knob, and a jog dial on the bottom left of the device, a D-Pad on the bottom center, and then a selection of buttons placed in pretty convenient locations no matter which hand is using the console. Once the device is connected to a computer the haptic feedback response kicks in, which gives both an audible “click” as well as force-feedback clicks when you use it. The vibrating response and sounds are interesting and welcome for precision work, but if you are someone who likes to work discreetly or if you are working with video and audio, this feature may get a bit annoying. Unfortunately, I did not seem to find a way to disable the sound either.

Update: TourBox has clarified that there is a way to turn off the Haptic feedback in the Console and that the haptic feedback in the prototype unit reviewed here is still being optimized. The company says it plans to make the vibration stronger and with a deeper sound for the retail version.

That aside, the device is just as responsive via Bluetooth as it is connected via the USB-C cable (which by the way, you can quickly change between without having to reload or change settings), with no noticeable input lag.

Like most new editing consoles that have hit the market in the last few years, the TourBox Elite is rather easy to install on both Apple or Windows devices, can be completely customized through the device UI, and this particular system can even load “presets” from other users with pre-loaded customizations for enhanced and advanced workflows.

When you first open the TourBox application, it is pre-loaded with a basic configuration for applications like Photoshop, Lightroom, and Premiere Pro. Additional presets can be downloaded from the official TourBox Preset website, other users, or you can make your own. It is even possible to customize the TourBox for applications like Google Chrome for easier web browsing. Basically, the application gives users the freedom to create custom controls for almost any application on their computer including macros for multiple custom commands to be enabled with a single button click. TourBox can also automatically switch between applications that you have set up presets and actions for. 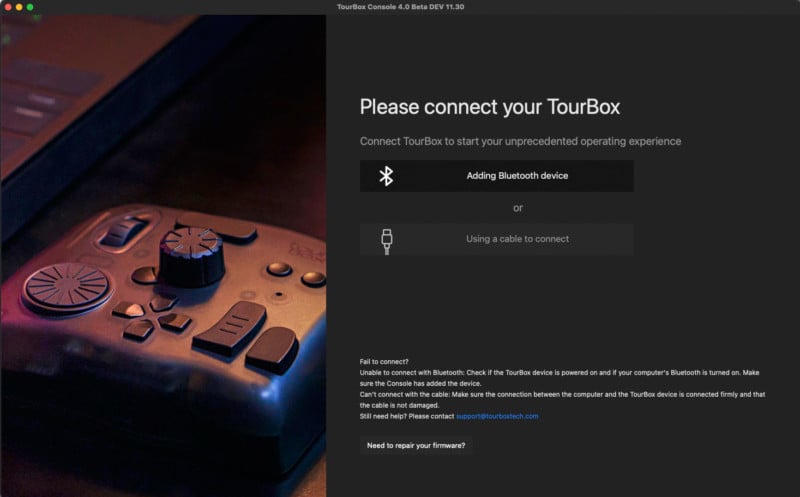 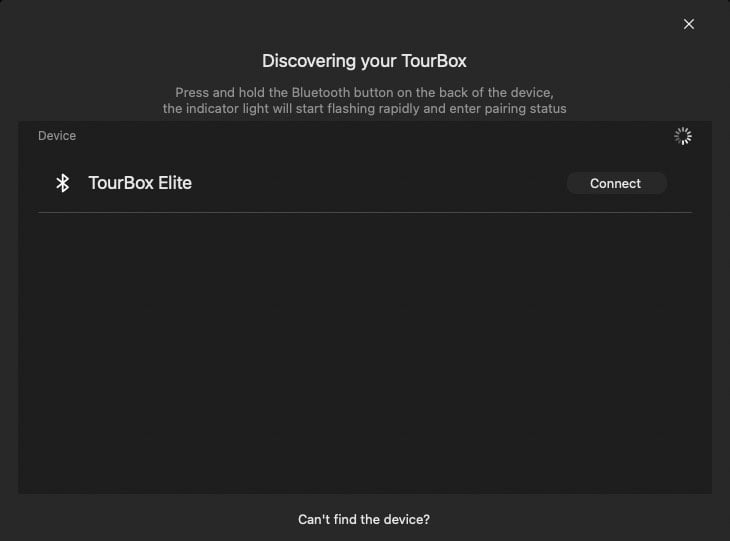 At first glance, the system can be a tad overwhelming as there are far more button combinations that can be programmed than there are buttons on the device, but after a little experimenting, it can be pretty easy to figure out the most used tools for each application for users to figure out what button to assign them to on the console.

Most users recommend creating separate profiles for each step of the workflow. For Adobe Lightroom, importing, culling, editing, printing, and exporting should all be separate presets to make sure no shifts are made accidentally. Additionally, like all external editing consoles, there will be a learning curve to adapt to when using them. It just takes time and repeated use to get comfortable with the devices, and to stop “looking” to be sure the right button or dial is being used. Once that is tackled it is possible to just sit back and relax comfortably while editing (even from the comfort of a sofa) instead of being hunched over a keyboard at a desk. 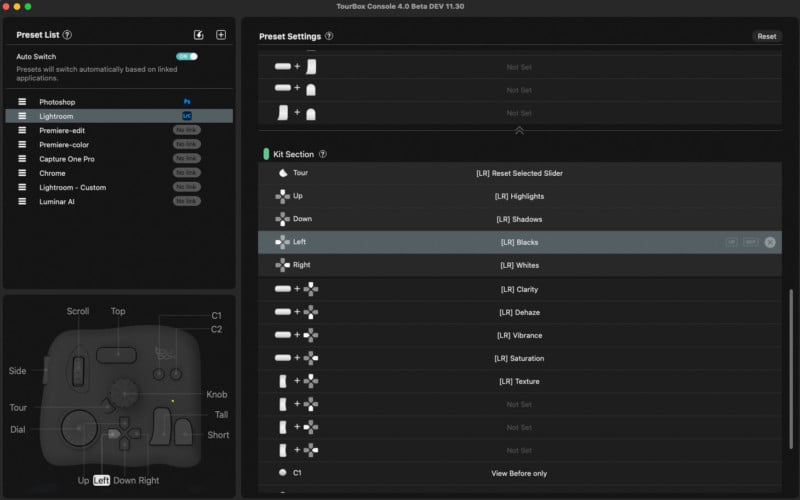 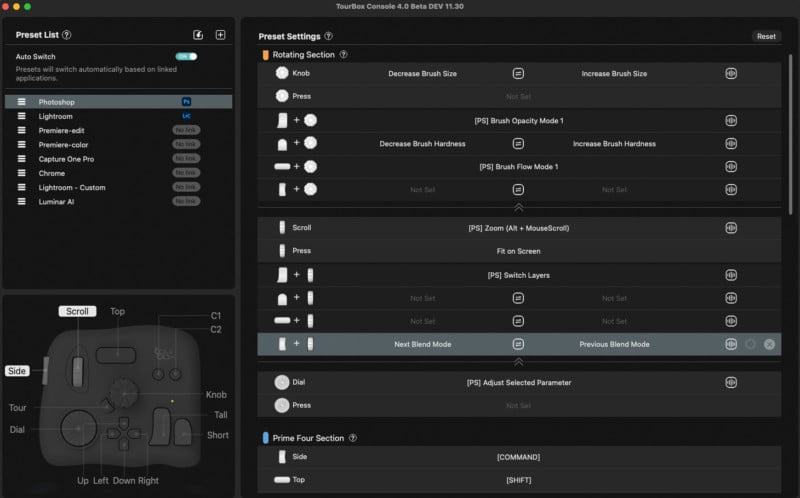 Since I’ve used the device over the last couple of weeks, I’m still having some muscle memory issues as I’ve gotten used to it in Lightroom and Photoshop. Despite this, I can already see the value of the tool, especially when traveling and working remotely.

Using it to edit images actually feels pretty intuitive as, despite what I found to be a very odd design at first blush, the console actually feels comfortable to use ergonomically. I can tell that once I spend a little more time using the TourBox Elite, the buttons will feel more natural and it will be much easier to move through and do quick edits on my selections before moving into applications like Photoshop. Even with my stumbling fingers, using the TourBox was much faster than me simply using the trackpad of my laptop (assuming I didn’t have a mouse available) which made me see the value of the device while traveling or away from my desk.

For Photoshop, there is a tad steeper of a learning curve. However, operating on my laptop with a Wacom tablet to edit, using the Tourbox I was able to program my most used tools into a custom setup making it very easy for me to swap between tools with my left hand while never lifting the pen off of the tablet on the other. Arguably you can do this with your keyboard also, but I wanted to test this device out as though I were working remote off a laptop, and as such was trying to not use my keyboard as much as I could. 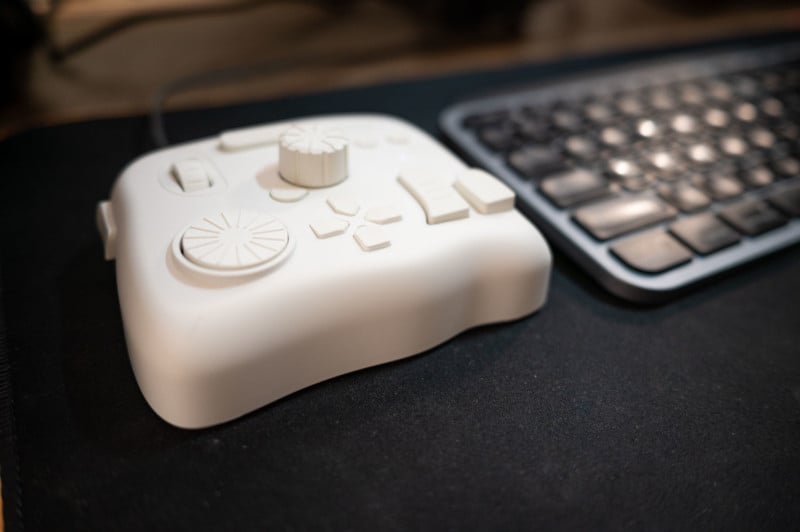 It is possible to set each tool that is used to different modes by using the scroll wheel, which makes swapping between the healing, spot healing, and patch tools much faster. The same goes for the selection tools (object, magic wand, and quick select) and brush tools. Basically, saving a few seconds with every tool swap, which over dozens or hundreds of images, adds up to a lot of saved time.

Even though at first I wasn’t really impressed by the device, after using it for a few days I began to really enjoy the little console for its simplistic design and wildly easy to program customizations. From what I have read on the previous generation of the consoles and what this version changess, the durability and button designs have been updated just enough to make them a little more long-lasting, and when paired with the software updates like haptic feedback and macro features it becomes all the more worthwhile of an investment.

For users who already have the previous generation of Tourbox (wired), the Bluetooth feature may be worth the price alone for the upgrade. For everyone else like me who’s never used this system before, I think it boils down to personal preference, and after using the Elite for a few weeks I can say that it has officially won me over. 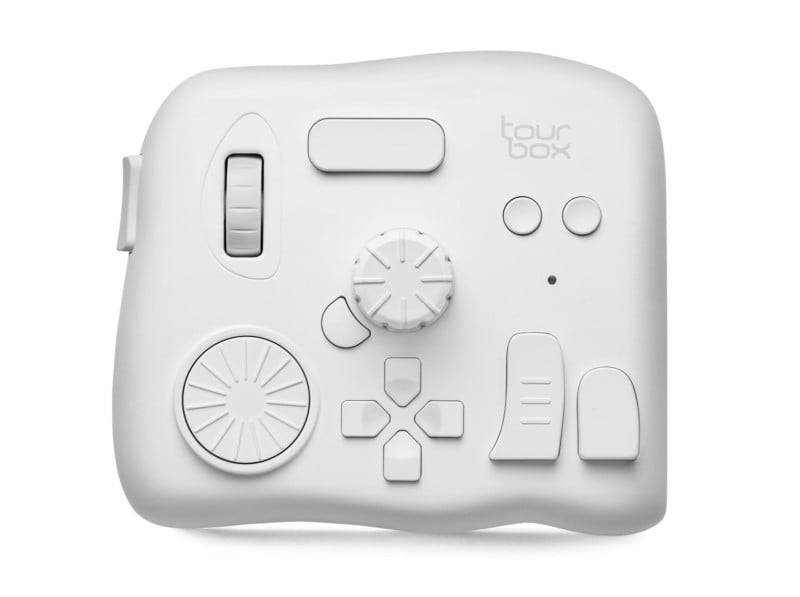 There are a variety of external editing consoles available on the market today ranging from the $279 Loupedeck+ and $549 Loupedeck CT consoles, the $300+ Monogram Creative Consoles, the $89 Xencelabs Quick Keys, or if you want to go into the super high end market, even the over $2,000 Blackmagic Design Mini Panels.

Basically, there is a console available for everyone’s personal preferences, customization needs, and budget. The one thing the $268 TourBox Elite has going for it compared to most of the other items in this list is, other than the Xencelabs Quick Keys, it is the only fully wireless Bluetooth editing console, making it much more attractive to users who don’t want to sacrifice a port on their computer or for those who simply want to avoid the clutter of cables on a desk.

Yes, if the benefits of the TourBox Elite sound like they will fit your workflow. As one of the few wireless editing console options available, it is going to appeal to those who want to ditch cables without losing the functionality.