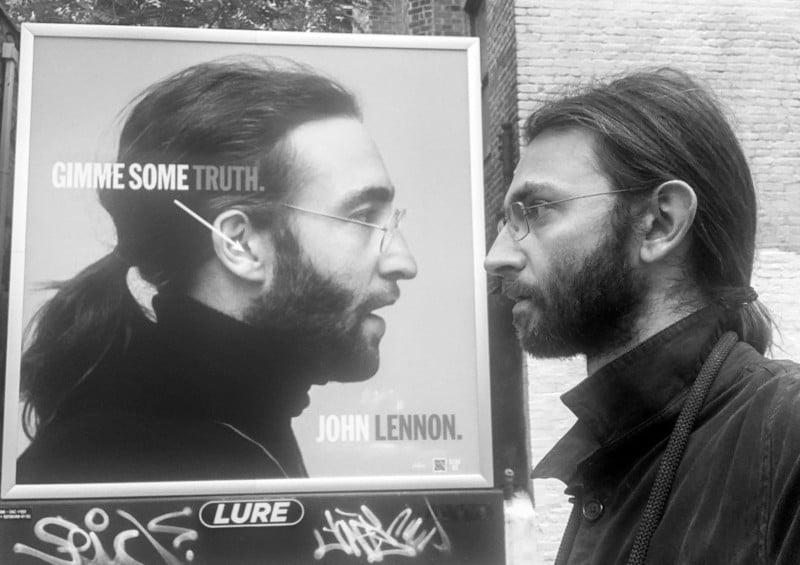 When I first saw the photograph, I was a bit confused. One was Beatle John Lennon because his name was written in bold, but who was the other similar-looking person?


Well, it’s New York photographer Eric Kogan who is often traveling by foot in Manhattan. He loves street photography as it engages him with his surroundings, and he can see something new even in mundane or familiar places.

On the afternoon of October 25, 2020, Kogan was running errands. John Lennon was not on his mind at all when he dressed up to leave his house. New York was on a COVID-19 lockdown and how he looked or dressed was not of any concern.

At Houston Street near West Broadway in Manhattan, an intersection he passed very frequently, Kogan suddenly stopped in his tracks and did a double-take. Oh, yes, it was John Lennon, but…why does Lennon suddenly look so familiar? Of course, he spotted a resemblance for the first time!

“Seeing his portrait made me take a step back and have a good look at myself,” remembers Kogan of that day over a year ago. “I was alone at the time–which was good because I don’t think I would’ve embraced the moment as much as I did if I were in company–and it made me remove my mask to study my face.

“It felt like years had passed since I saw myself from the side and looked at my profile, and what began as a quick and funny coincidence grew into a tedious image to get right. I took it from many angles before arriving at the one you see here.”

It was taken with his phone with his arm extended to keep this versatile camera out of the frame.

“Most of my street photography happens with a camera and a 35mm lens, but the focal length proved to be too narrow this time, so composing on another device felt like a new and engaging experience,” explains Kogan. “It was tricky because he was so large, printed at least 25X larger than life-size. Standing near it would dwarf me, so I fought to find the perfect distance where, thanks to the illusion of foreshortening, we appeared to be equal in scale.”

And so, a very uniquely interesting self-portrait or a double portrait was born!

Eric Kogan was born in St. Petersburg, Russia, in 1985 and lives in New York City. Kogan’s first experience with photography came in his early teens with a position at a photography lab. His first duty was processing film. He recalls his first time working in absolute darkness as a light turning on in his head as the one in the room went off. Getting creative with the medium didn’t start until college. In 2004, a fine art photography course brought him back into a darkroom.