Photographer Michael Shainblum captured what was previously thought to be impossible due to heavy light pollution: a photo of both the Golden Gate Bridge and the Milky Way together.

It takes great determination to head out in the night and patiently wait hours to photograph a landscape scene that may or may not work out in the end. Shainblum wanted to combine some iconic elements together into a photo, but getting everything to fall into place perfectly was a gamble and the idea of seeing stars and the bridge together was, to this point, a pipe dream.

But he got extremely lucky thanks to perfect conditions.

Although he has captured fog numerous times before, such as in a forest and high up in mountains, he was able to join the brightly lit Golden Gate Bridge with the normally invisible Milky Way galaxy in one photo.

Normally, the San Francisco Bay is a terrible spot to try and photograph any stars and being able to capture the Milky Way at all in this location is incredibly uncommon. Shainblum tells PetaPixel that he has visited the site countless times but always had little to no stars visible due to heavy light pollution in the area.

“I think this was the perfect balance of a few different things,” he explains. “The fog was thick and low enough to really block out most of the light pollution from the city, but the fog had also traveled so far inland that it covered most of the eastern bay as well. The clouds above just the eastern side around the cities may have also helped. The last thing is the time of evening and time of the season. I was photographing the Milky Way late at night as it started to glide across the western sky, away from the city.” 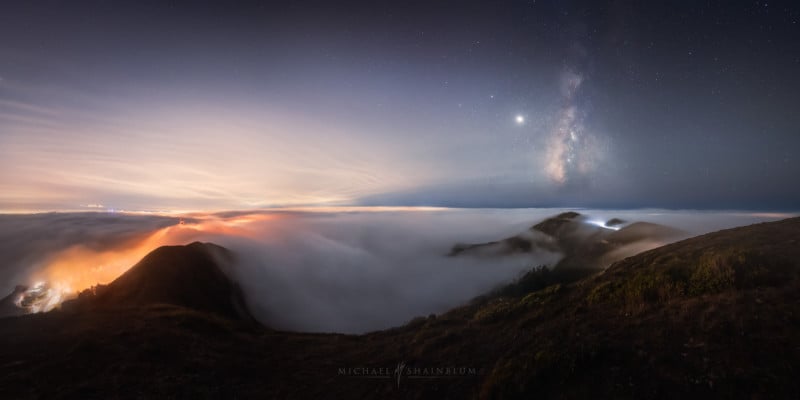 To make the photo, Shainblum took two rows of horizontal shots that he later stitched together in post-processing. Although at the time of capture he had no idea if it would result in a successful shot, he was pleased with what he made, especially considering the rarity of the circumstances. With the warmly lit bridge tower slightly pointing out of the thick fog on the left, the blue Milky Way delivers a contrast on the other side of the image. 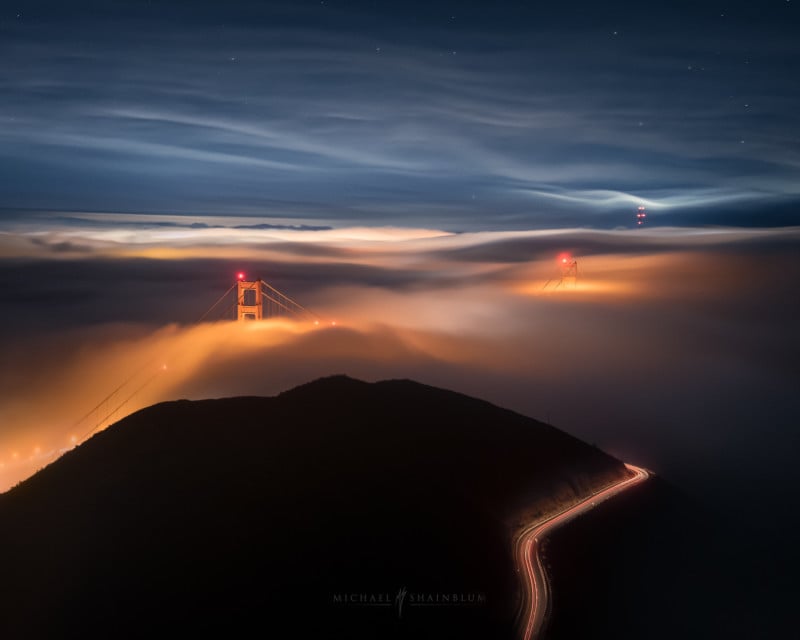 The one photo wasn’t the only image he captured that night. Shainblum also took a “classic view” of the iconic bridge that many enjoy photographing. In the composition, he included both bridge towers, poking out of the soft fog that completely covered the scene, and the light trails of cars driving on the road.

To get different patterns of fog and variations of car light trails, Shainblum took multiple exposures and created a photo with colorful contrasts between the warm and cool tones. 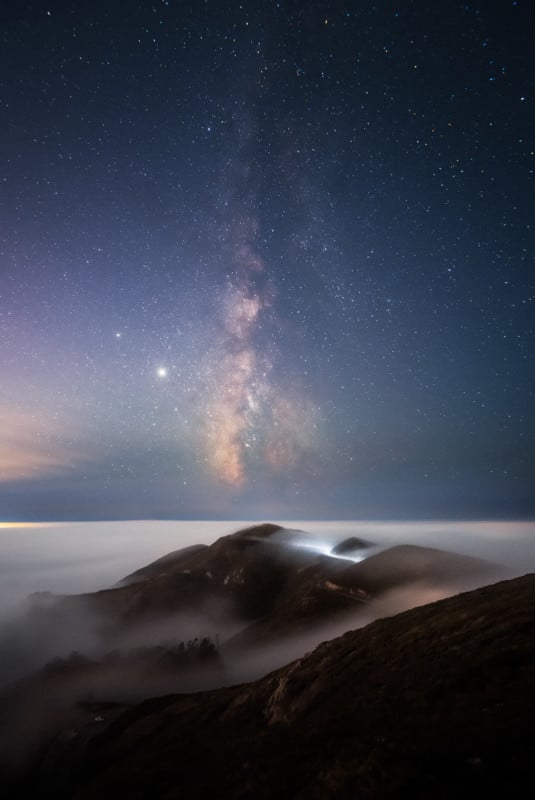 The Milky Way overlooking the hill deserved an image of its own, too. Unprepared to encounter a photo opportunity like this, Shainblum notes that photographers should take the chances when they present themselves, even if it means steering off the initial plan. 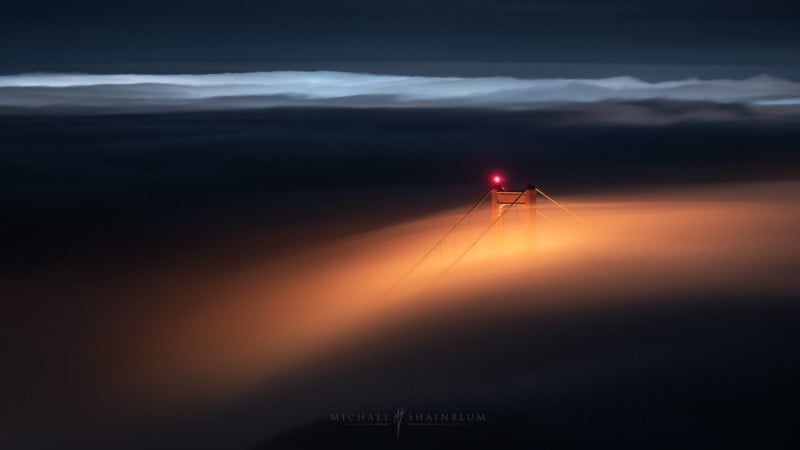 Just before calling it a day, Shainblum took the few last long exposures of the bridge tower and the fog flowing past and through the gate for a simple, minimalist scene.

For photographers who are considering capturing the Milky Way, Shainblum recommends checking the weather first, such as on the National Oceanic and Atmospheric Administration website, noting the phase of the moon, which can be tracked using the PhotoPills app, and checking the light pollution.

When it comes to equipment, Shainblum recommends bringing a tripod and a wide lens, such as a 14mm-24mm full-frame lens, with an aperture f/2.8 or lower. In addition, a headlamp comes in handy, especially if the phone runs out of battery.