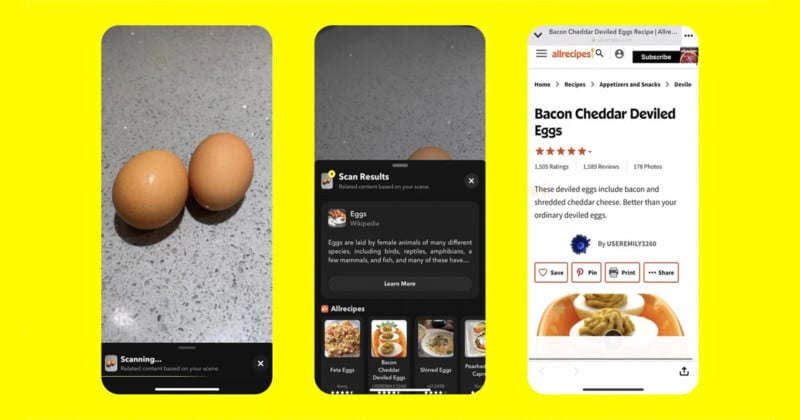 Snapchat has introduced a new Food Scan feature that allows users to scan ingredients with their smartphone camera in the app and receive recipe suggestions matched from an online food platform.

As PetaPixel reported in August, Snapchat has shifted its direction towards a visual search engine when it introduced the Scan feature. Although Scan has been a part of the app since 2019, only this year has the feature became more prominent in the app.

This tool lets the app identify a number of day-to-day objects such as clothing, pets, plants, dog breeds, and more. It can even help solve math problems by scanning a notebook with a written equation.

When users open the Snap feature, it brings up a choice of relevant Lenses based on what is scanned. For example, Creative Lenses allow uses to add creative effects to subjects, Utility Lenses use augmented reality to detect and provide contextual information about specific objects, while Marker Lenses allows creating 3D visuals in the scene.

Now, Snapchat has added Food Scan to its visual search engine, which is available today for users in the United States. Food Scan can analyze and understand foods and ingredients laid out in front of the camera using computer vision.

Then, based on what the camera sees, it connects to suggestions from Allrecipes — a food-focused online social networking service with a library of recipes.

The recipe inspiration we all needed. Hello, Food Scan!

👻 Just open your Snapchat
🥑 Point your camera at an ingredient
👆 Tap and hold to Scan
🔍 Start exploring recipes pic.twitter.com/O8PK0jgg3A

According to Snapchat, the feature recommends over 4,500 recipes from Allrecipes based on over 1,200 ingredients that are understood through the app’s camera. Food Scan also delivers relevant information from Wikipedia to help users learn more about the food in front of them, such as its origins.

“So, if you have an extra carton of eggs chilling in the refrigerator, Scan them and relevant recipes will be immediately at hand — everything from huevos rancheros to bacon deviled eggs,” Snapchat explains.

Currently only available to users in the United States, the company did not specify if or when Food Scan will be available to Snapchatters around the world.