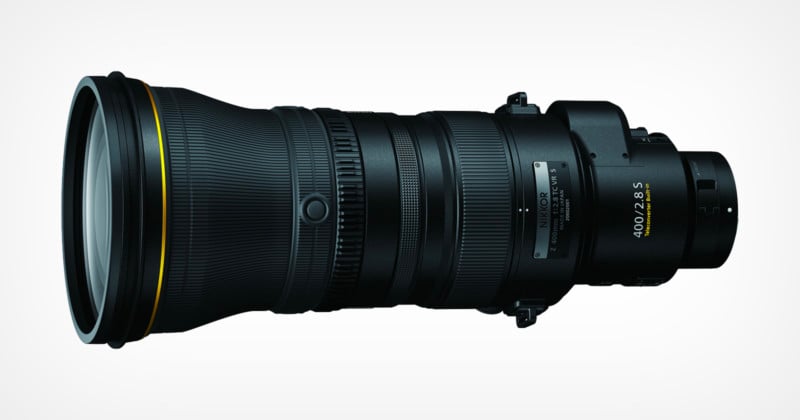 Nikon has announced that it is developing a new 400mm f/2.8 TC VR S prime lens with a built-in 1.4x teleconverter for Nikon Z-mount, which will be the first super-telephoto lens made for Nikon’s mirrorless system.

The new Nikkor Z 400mm f/2.8 TC VR S prime lens will belong to the S-Line of Nikon Z Lenses that the company states “pursues the ultimate in optical performance.” The super-zoom prime lens will feature a built-in 1.4x teleconverter and a new coating that Nikon promises will deliver the highest quality anti-reflection performance in Nikkor lens history.

The company says the lens will have the ability render incredibly realistic and high-resolution color while also providing what Nikon describes as a beautiful and smooth bokeh pattern. The company also says this lens will be very useful for action, sports, and wildlife photographers, as well as being quite useful for videographers who aim to capture footage of the same genres. At the time of publication, PetaPixel was not provided specific details on this new coating, the expected price, nor when the lens is expected to come to market.

In fact, other than the included image and the few notes above, Nikon provided scant little information about the lens.

If the amount of time it took Nikon to go from announcing the development of the Z9 to actually fully unveiling the camera is any indication of wait time, however, it will likely be several months before more is revealed. On that note, the current parts shortage and global supply chain disruptions are likely to delay any new product even further, so it’s safe to assume the lens won’t be available until 2022.

The most recent 400mm f/2.8 that Nikon has produced would be the AF-S Nikkor 400mm f/2.8E FL ED VR Lens which was originally released in 2014. It doesn’t include a built-in teleconverter and the exterior of the lens looks substantially different from the image provided of the new mirrorless 400mm f/2.8, so it’s likely safe to assume that Nikon has redesigned or changed the optical formula.

If so, that would be a departure from Canon’s choice to simply build in an EF to RF mount adapter into its latest 400mm lens. there isn’t really any indication that Canon’s choice made an inferior lens, but the choice did add a bit of length to the lens that could have probably been avoided if Canon had chosen to change the optical formula. In Canon’s defense, its choice did allow it to release the optic much faster than it appears it will take Nikon to produce its new one.