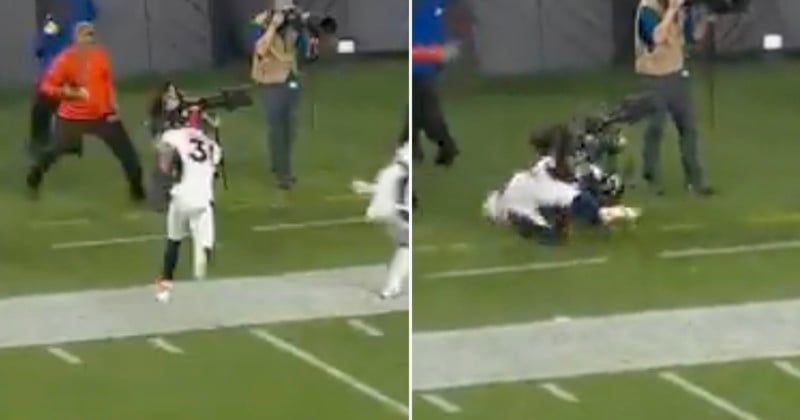 During the third quarter of the game, Simmons jumped headlong into the sideline while attempting to intercept a pass and collided into Starkey’s chest.

This camera guy won’t get his wind back until the third quarter pic.twitter.com/VPaDEVX2JT

As noted by Broncoswire, Twitter was abuzz with conversation about the incident with takes ranging from jokes at Starkey’s expense to one who noticed that he was willing to sacrifice his own wellbeing for the sake of his camera.

That photog got SMOKED

You can teeth but you’ll never take my equiiiipppppmmmmeeeennnntttt

This is Browns team photographer @TheMattStarkey. As a fellow Matt, I hope you’re OK, man. https://t.co/NC9TuW8qAH

Not the shot he was planning on getting pic.twitter.com/wvVP1Cwuzn

that photographer just got nailed 😳 #TNF

Starkey captured a few outstanding photos from the game and a fellow photographer even captured one at the exact moment he took the crushing hit. In it, you can see that Starkey was holding two cameras, which made it near impossible for him to properly brace himself against the oncoming hit let alone react fast enough to avoid contact.

Brownies get the dub and @TheMattStarkey lives to tell the tale pic.twitter.com/ZFiEWoC3gd

#TNF through the lens!

Thankfully, Starkey reported in on Twitter after the game that he was ok and even got a photo with Simmons to prove there were no hard feelings.

Starkey was confirmed 100% and was seen at the Browns practice on Monday:

Can confirm @TheMattStarkey has returned to practice after taking a hard hit Thursday against the Broncos. #Browns pic.twitter.com/S2hLfrTFmB

American football players are heavily clad in protective gear which makes them physically harder and heavier when moving at speed. Against one another, injuries are already common, which makes the fact that Starkey and cameras emerged unscathed even more impressive.