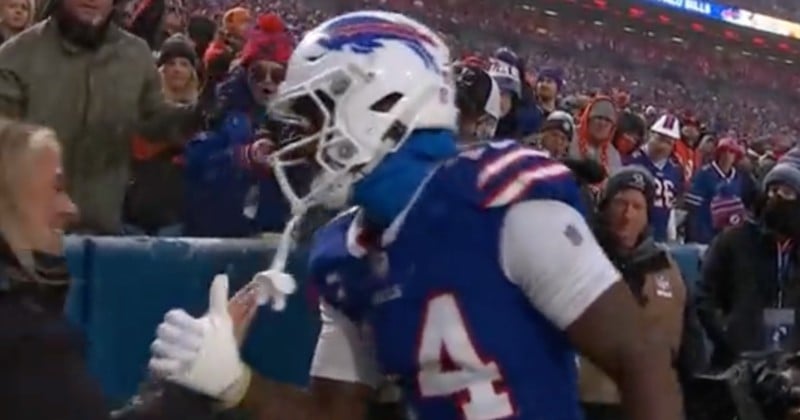 Buffalo Bills star wide receiver Stefon Diggs wiped out a photographer on the sidelines trying to make a play but immediately checked on her after the collision.

NFL star Diggs apologized to the photographer after crashing into her after he missed a catch during the Buffalo Bills’ game against the Cincinnati Bengals in the AFC Divisional round playoff game on Sunday.

With under 10 minutes remaining in the second quarter of the game, the Bills were trailing the Bengals 17-7 amid the falling snow. The snowy conditions were affecting the teams with several players slipping during the game.

Stefon Diggs slid through a photographer on the sideline, then took the extra time to make sure she was ok pic.twitter.com/VRRtZeh4Jg

As Diggs attempted to make the catch, he skid across the icy turf and slammed into the wall out the back of the endzone. In doing so, the wide receiver inadvertently hit and took out a photographer on the sidelines who slammed into the ground on a heap.

‘A Decent Human Being’

After getting back on his feet, Diggs motioned to return to the game. However, before he made his way back to the field, the NFL star made sure to turn around and check on the photographer.

Diggs momentarily stayed with the photographer and the pair exchanged a thumbs-up sign as she gestured that she was uninjured.

According to USA Today Sports, Diggs needed some attention from the training staff after the fall, but he swiftly returned to the game. The Bills ended up kicking a field goal to make it a one-score game at 17-10.

I know they have to run back to the huddle and they don't really have time to check on the people they run into and possibly being bulldozed is something they signed up for with the sideline job but all that said THANK YOU @stefondiggs for being a decent human being. https://t.co/OR2REZBwuH

Class act from Stefon Diggs checking on the camera woman.

I do appreciate Stefon Diggs checking on the Photographer to see if she was okay before he left the side .. and then he stop and needed treatment himself. 👍🏼

I’ve thought for a while Stefon Diggs was a good dude. He continues building that reputation after checking on the photographer after that collision.

Social media users appreciated how Diggs checked on the camerawoman after he collided with her — calling him a “decent human being” and a “class act.”

This response is notable given that it is in contrast to a situation that happened earlier in the season. In December, San Francisco 49ers star Deebo Samuel was forced to apologize after brutally wiping out a photographer and simply stepping over him without checking to see if he was ok.