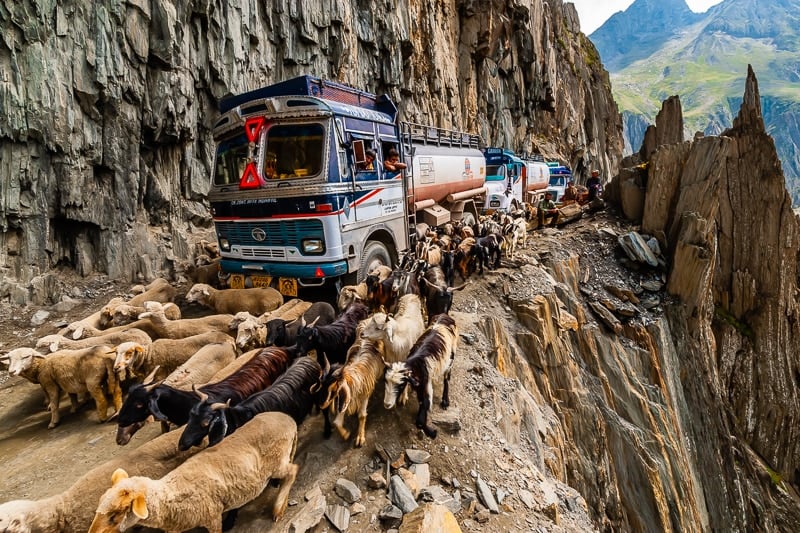 Blaine Harrington began his career in photography in the 1970s after a brief stint racing motocross. His connections to the racing world led to assignments covering races around the country and in Europe – piquing his curiosity about travel.


After studying at the now-defunct Brooks Institute of Photography, Harrington spent a few years working in fashion photography but eventually pivoted to travel photography to sate his desire for more authentic subject matter. His network and skill as a photographer allowed him to live a peripatetic life working for publications like National Geographic, Travel + Leisure, Delta Sky, and many more.

He has competed regularly in the Society of American Travel Writers (SATW) Bill Muster Photo Awards, and recently won its Photographer of the Year award. We spoke to him about the business of travel photography, changes in the landscape, and the role of contests in his marketing.

Note: This interview has been edited.

Allen Murabayashi: The contest ecosystem has been subject to a fair amount of criticism in the past few years for a variety of reasons (e.g. rights grabs, exorbitant entry fees, controversial winners). What is the value of contests like SATW in 2022?

Blaine Harrington: The SATW Muster photo competition has changed in importance as the travel industry itself has undergone major changes. The industry has been hard hit by the 2001 World Trade Center disaster, the 2008-2009 World financial meltdown, and COVID. Two of these three things are “Black Swans,” things you could never have predicted.

The industry has never fully recovered from these events. And as well the general photography business has suffered what I consider a “perfect storm” of changes: the internet, the disappearance of much of print, digital photography and the overabundance of imagery, and the major stock agencies taking over smaller “mom and pop” stocks agencies. Then the price war, mostly started by Getty, drastically lowered prices and led Corbis to go out of business.

One of the reasons that the SATW competition has been important is that its membership is made up of travel writers, travel photographers, travel editors (primarily for major newspapers), other travel journalists, and a large number of public relations professionals who represent tourist boards of various countries, various U.S. states and cities, and for major hotel chains, cruise lines, etc.

The idea, I thought, was there would be a certain amount of business to be had from these various travel companies that these PR people represented. Honestly though winning Muster awards in all but two years out of the last twenty, did not bring me that much business. I was, however, often invited to destinations to do my work, sometimes on press trips, but most often on individual trips. Until recent years this meant everything was covered, including international airfare.

I do not at all agree with rights grabs and would never enter a competition that wanted me to transfer my copyright. Also, I have not entered any [contests] where the entry fees seemed exorbitant.

You’re living the dream of a lot of photographers, namely, making a living from travel photography. But you also have 40 years of experience and an extensive archive. What are the realities of being a travel photographer in a highly competitive environment?

I have been fascinated by travel since I was a kid. I wanted to do it long before I ever had any opportunities. My huge amount of time learning all kinds of photography and doing different parts of photography, helped me become who I am.

A travel photographer has to be able to shoot in cities, in the countryside, photograph people, both documentary style and posed, light things, shoot events and action, and shoot aerials from a helicopter. So that, and my knowledge of the world from first-hand experience and photographing people in all walks of life (everyone from a poor shoeshine boy in India to a Fortune 500 CEO) – treating them all with the respect they deserve –it’s all part of the photographer that you become.

Photography is a hard game. Doesn’t matter if you just started or you’ve been doing it forever like me. Few people have the temperament to be a freelancer. Yes, you can set your own hours, but if you decide to take a bike ride during the workday, that means you may be working in the evening. You have to be thick-skinned enough to take criticism (even when it’s not accurate). You have to always believe in yourself.

And yes, post-production takes up a good amount of time for a travel photographer and most of that is unpaid. If I travel for a month, for example, I may sit in front of a computer for three months (all day long) adjusting photos in Lightroom, doing keywords and captions, rating and selecting photos. It’s one thing when you are dealing with 100 photos, quite another when you come back with 10,000 keepers.

I really cannot paint a rosy picture for anyone who wants to do this “dream job.” I think that boat has sailed, unfortunately.

If you look at my website, the quality of my work is consistent from one end to the other. I have been prolific. I have 35,000 photos on my website. This year I left both Alamy and Getty because I simply cannot stand seeing my work sold for next to nothing.

In stock photography, there is this one-size-fits-all approach to pricing. A photo taken with an $8,000 super-telephoto lens is priced the same as an iPhone photo. One photo is absolutely much better than another. Doesn’t matter. Same price. One photo was taken from a helicopter that I paid $600 for the flight. Doesn’t matter.

In the past few years, we’ve seen the rise of social media influencers who create travel-related content (some of it very high production quality), but instead of making money from photography, they monetize the size of their following. Do you consider them to be competition? Or something entirely different?

Five or ten years ago I would have said influencers who have a completely different business model don’t have much effect on us and cannot take away business from us. Now I think that is no longer true. No matter who is taking business, whether it is part-time photographers, advanced amateurs, or influencers, the vast numbers of people taking away business has hurt.

One of my greatest pet peeves is what has happened to stock photo prices in the last ten years especially. The way I see it, we had well-established pricing for print uses: for ads, brochures, magazine covers, you name it. When internet use came along, clients told photographers or agents “oh, this new internet thing, we don’t know if it’ll really take off, so just sell us rights for that for a little extra along with print rights”. So guess what? Internet and digital use was not only successful, but it pretty much killed print. But rights for those new technologies were never adjusted to reflect the reality that we were no longer making money (or not as much) from print, and therefore these new rights were set below the cost of doing business.

Now we are left with an untenable situation where the more photographers produce, the less they make.

How do your clients find you? Newsletters? In-person visits with editors? SEO?

For many years I was able to rely on a number of different users of travel photography: travel magazines and major newspapers; adventure tour companies for their catalogs and brochures; travel guide books for inside use and covers; calendars. Most of these are gone now.

I no longer do much to find new clients. Primarily I rely on SEO and people doing google searches to find me. I had already started to rely a lot on stock photography earlier in my career and found time and money spent shooting were more valuable (for me) than marketing efforts. This worked ok until prices went downhill.

I would add that as I added sidelines to my core business, such as selling custom prints, photo books that I have self-published, leading photo tours (for other people who hired me to lead the tours), that all of these are a lot of work! They may just be a side line to create a new revenue stream, but they are not passive. They are hard to dabble in.

A great portion of my income in the last five years has come from enforcing my copyrights. The digital age has made it easy for people to copy and steal photography, music, writing, etc. I am thankful that I registered much of my work with the U.S. Copyright Office before I started to find infringements.

I worked with Pixsy in the beginning and still do somewhat. Through their site, which helps you reverse search your entire website, I found something like 100,000 infringements! Most were in places where there is nothing I can do about it: China, India, or safari companies in Africa. But in the US, UK, Germany, and a handful of other countries, pursuing copyright infringement works.

Other infringers have included some of the most well-known textbook publishers. These companies did not “steal” the work, they licensed it from stock agencies, but they acquired licenses and then ignored the terms.

[Infringement] is a huge problem and I urge all photographers to both register their work with the Copyright Office and be diligent about protecting their rights. I have a disclaimer on every page of my website warning people not to infringe my work.

COVID-19 restricted travel for many people. How did you spend your time in the past 18 months?

Somehow I stayed busy, but I have been on the road forever – either planning new trips, traveling, or processing the results of those trips. So it was strange. But I have traveled so much and have accomplished so much of what I set out to do that I am actually not chomping at the bit. I certainly want to get there and have more adventures, but I am waiting patiently (for now, anyway).

My last trip was to Brazil for Carnaval. I got back early March 2020. At the time I was leaving Brazil, they had only one confirmed case of COVID (someone who traveled there from Italy). Within a month, Brazil had blown up to be one of the biggest hot spots in the world.

And for the gearheads (myself included), what do you typically carry in your kit?

I do not consider myself a gearhead (although that’s not entirely true), but I do very much believe in learning anything, photography included, until you are completely comfortable with the technical aspects and then being more about ideas than gear.

Having said that, I started shooting with Nikons when I was still in high school and I have remained with that brand for fifty years. Other photographers have moved into mirrorless, I stick with my DSLRs. I have Nikon D810s (I’d like to have D850s but unless I break a camera I stick with the ones I have).