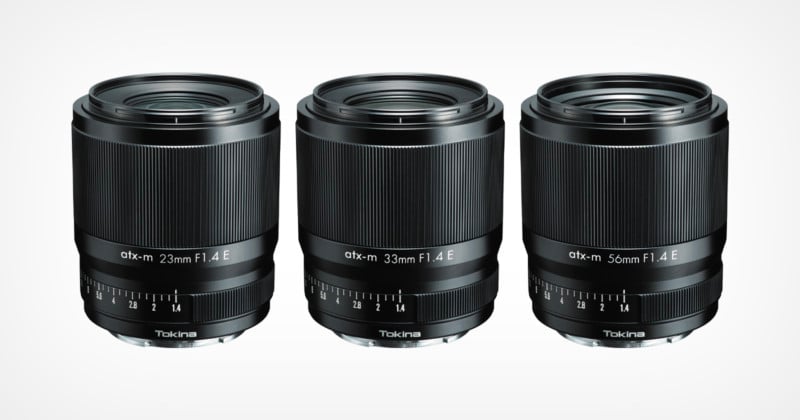 Tokina has announced three new fast APS-C primes for Sony E-Mount: the atx-m 23mm f/1.4, the atx-m 33mm f/1.4, and the atx-m 56mm f/1.4. The three are designed to work in unison to give photographers wide, standard, and semi-telephoto options.

Tokina says that the lenses are designed for amateurs or semi-professionals and are suitable for both stills and video use. The three lenses are purposefully compact and lightweight and all feature fast but silent autofocusing thanks to a stepping motor (STM). The trio also features fully camera body communication to access five-axis image stabilization and all three have clickless aperture rings to smoothly control aperture manually when shooting video.

The widest of the trio, the 23mm f/1.4 features an aperture range of f/1.4 through f/16 through a nine-bladed aperture diaphragm and is constructed of 11 elements in 10 groups. Two of those elements are low dispersion SD glass elements.

While the lens is light and compact, it is still made of metal parts, specifically the barrel and the lens mount. The 23mm focal length translates to about 35mm on a full-frame camera. Tokina says this particular lens is ideal for street photography, landscapes, and portraits.

Below are a few sample images provided by the company:

Tokina’s 33mm f/1.4 has an angle of view that is approximately 50mm on a full-frame camera and is designed to serve as a reliable portrait and landscape lens. It features an aperture range of f/1.4 through f/16 via a nine-bladed diaphragm. The company used a 10 element in nine group design that features a single low-dispersion glass element.

Below are some sample images taken with the lens:

The final lens in the trio of new primes is the 56mm f/1.4, which has an angle of view that is approximately 85mm on a full frame camera and is billed as an excellent portrait lens that works for both stills and video. The aperture range is the same as its two contemporaries, f/1.4 through f/16, and it also uses the same nine-bladed diaphragm design. It uses a 10 element in nine group optical arrangement of which one is a low dispersion glass element.

All three lenses come with a two-year limited warranty and are expected to be available on November 12. The optics look like new mount options that were previously made available for Fujifilm X-mount cameras, and while pricing was not explicitly provided by Tokina at the time of announcement for these E-mount versions, the lenses will likely not deviate too far from the cost of the current Fujifilm selection: the 33mm f/1.4 currently sells for $379, the 23mm f/1.4 is available for $429, and the 56mm f/1.4 can also be purchased for $429.