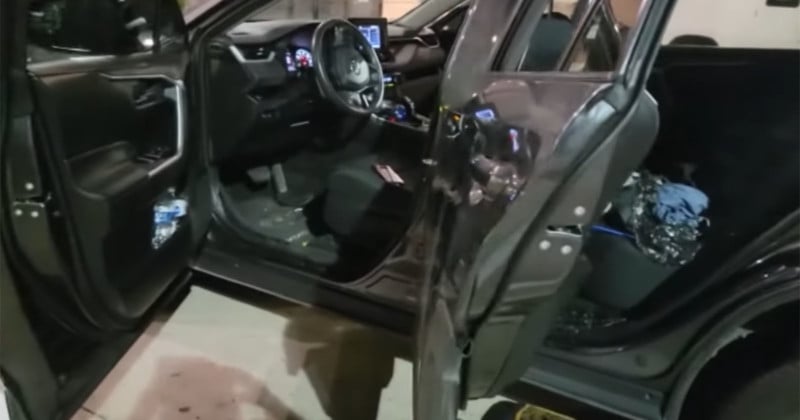 A Houston-based wedding photographer has suffered a huge setback to his career after thieves broke into his car and stole over $20,000 worth of camera equipment.


Photographer Gaurav Hariyani had just finished up a wedding photo shoot last Monday when he parked at a Costco and walked into a Buffalo Wild Wings to grab some food with friends. When he went back out to his car afterward, he found that someone had shattered his car windows and stolen all of his gear.

“When I came out to my car, I saw that my car window was shattered,” Hariyani writes. “The first thing that came to mind was my camera bag which I had a gut feeling that was gone.”

The photographer says he lost some brand-new equipment that he had worked hard and saved up for to invest in.

“[The Sony Alpha 1] was my dream camera,” Hariyani continues. “I bought it after working for eight years as a photographer and videographer in the wedding industry.”

“It was definitely a heartbreaking moment for me,” Hariyani tells Click2Houston. “[…] I’ve been working for several years to get this basic equipment first and then I just invested a good amount of money with new equipment and now I see there is nothing for me.”

The photographer says that while he had some insurance that protected his property, he found that his policy didn’t cover this type of theft.

If you’re a photographer, make sure your insurance policy covers car break-ins, and always try to keep equipment and photos from shoots with you (though that brings on its own set of risks).

“If you are trying to go out or going to restaurants make sure you have your belongings with you, don’t keep it in your car,” Hariyani tells Click2Houston. “[…] It can happen anywhere.”

There’s a silver lining to this story, though: others are now rallying around Hariyani to help the photographer get back on his feet. After receiving local news coverage and starting a GoFundMe fundraising campaign, Hariyani has already received over $4,500 in donations to buy new camera equipment.