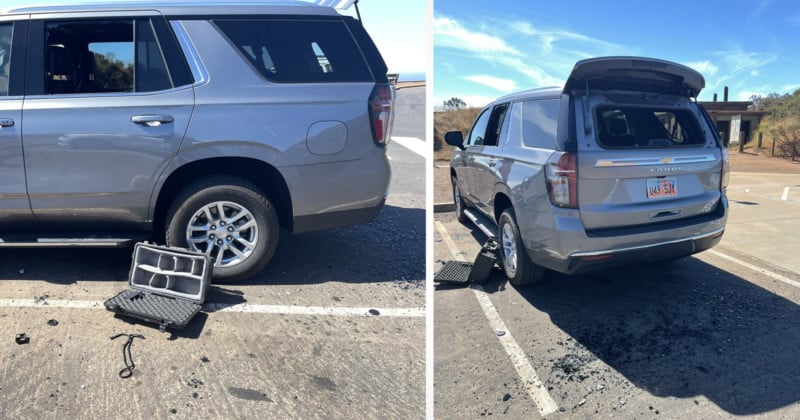 As you may have read, my gear was stolen in broad daylight as the camera was rolling two weeks ago in a public San Francisco park. It may be getting worse out there: another photographer got hit this week looking at Golden Gate Bridge.

He was parked near Battery Spencer Park in Sausalito, in the Marin Headlands, which offers one of the best views of the Golden Gate Bridge. Thieves bashed in his SUV windows and fled with multiple cameras, computers, hard drives, and more.

we are safe but our road trip had a devastating ending 2 days in. stopped at battery spencer Park in SF for five minutes to snap some pictures came back to our car windows smashed, suitcases, cameras, all film, all computers, hard drives, all gone. continued…. pic.twitter.com/EqsfyW16ut

What happened to Joe Greer has unfortunately been happening to lots of folks lately, so much so that where he was parked there are signs everywhere urging us not to leave valuables in the car.

I’ve since heard from many people in Washington State and elsewhere that the parking lots for trails have recently become open season for thieves, who know those who park there will be hours away from the cars as they hike: they break in while folks are on the trail.

This week I guested with Scott Kelby and Erik Kuna on their YouTube show, The Grid, talking about steps photographers and people who love them could take to help curb camera thefts when we’re out on the road. So I thought it would be a good idea to share these tips here as well.

Many are common sense, but as summer travel kicks off, the risk is real: please read and take these tips seriously:

About the author: Jefferson Graham is a Los Angeles-based writer-photographer and the host of the travel photography TV series Photowalks, which streams on the Tubi TV app. Graham, a former USA TODAY columnist, is also a KelbyOne instructor.