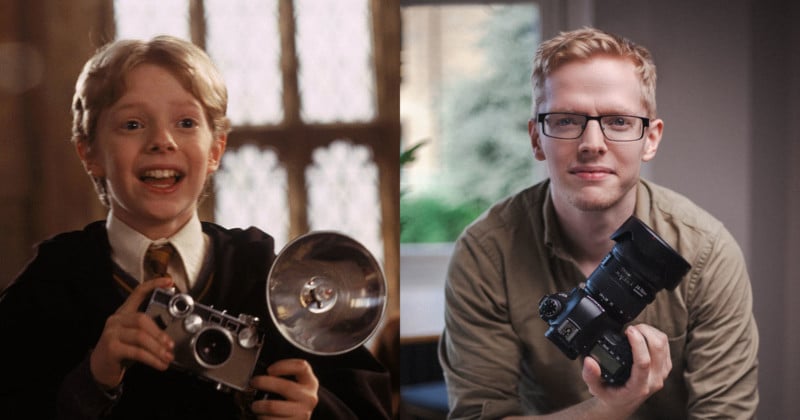 The character Colin Creevey in the Harry Potter universe is Harry Potter’s biggest fan and a boy who loves taking pictures. It turns out the Muggle actor who played Creevey in the hit movies has grown up and become a real-life professional photographer.


Hugh Mitchell grew up in the historic English city of Winchester, which is often voted as one of the happiest places in the UK. His life changed after he learned of auditions being held for the Harry Potter films.

“At school I wasn’t mad about drama, although I was in the odd school play,” Mitchell tells PetaPixel. “One day I saw a fax from Warner Bros up on the notice board (it being a fax tells you how long ago this was) recruiting hopefuls to audition for the second Harry Potter movie. Even at this point I knew that was a big deal, and I decided to apply, spurred on by the encouragement of my friends and reasoning that I had nothing to lose…

“To cut a long story short, I made it through three rounds of fairly nerve-wracking auditions and was finally chosen to play the role of Colin Creevey. It was absolutely nuts!”

In the Harry Potter series, Colin Creevey is a Muggle-born Gryffindor student who’s a year younger than Harry Potter, whom he reveres. Here’s a clip of Creevey introducing himself to Harry in the 2002 film Harry Potter and the Chamber of Secrets:

“The experience [of acting in Harry Potter] was unlike any other, even to someone who’s familiar with the world of filmmaking (which I was not),” Mitchell says. “There’s more waiting around than most people realize, but the excitement of being on set, wearing the costume, meeting the actors, and working with a crew was exhilarating and terrifying in equal parts, with countless ‘pinch me’ moments.

“Of course, it’s had ramifications for how the rest of my life has played out, so I’m massively grateful to have been involved with it.”

After appearing in Harry Potter, Mitchell joined an agency in London and worked as an actor for the next decade and a half, appearing in TV shows, movies, and some West End theater productions. He also held some “normal” jobs on the side, as most actors do due to unpredictable work schedules.

But eventually, Mitchell decided to turn his focus from acting to one of his other passions: photography.

“I eventually decided to move on from that and pursue my passion for photography,” Mitchell says. “I’m now a full-time photographer shooting landscapes, headshots, weddings, and a smattering of product photography. It’s also unpredictable to a degree, but I’m much more in control, there’s tons of variation and I get to meet some really cool people.”

Mitchell’s love for photography started at an early age. His father was a keen photographer, and he also won a Pentax film camera from a magazine competition at the age of 10.

“I think getting a camera into your hands when you’re a kid can play a big role,” he says. “But I didn’t get serious about it as a hobby until a few years ago when it became all about landscapes and the way photography marries up so well with a passion for the outdoors, a bug I also had.

“I came across Thomas Heaton’s landscape photography channel on YouTube, followed by Simon Baxter’s, and they both ignited a little spark in me, to use a cliche.

“As a birthday present I was given a place on one of their workshops in the Lake District – still one of the best weeks of my life – and that’s when I first started to entertain the idea of becoming a full-time photographer.”

After falling in love with landscape photography, Mitchell has branched out into a number of other genres as well from commissioned work to wedding photography.

“Now I’m taking a broader approach with my professional work, at the slight risk of having too many fingers in too many pies,” he says. “I discovered portraiture, in no small part thanks to other photographers like Sean Tucker, and have loved getting to grips with the different approaches and techniques involved.

“There are common principles across different branches of photography, of course — light, composition, exposure — but landscapes and portraits are obviously still completely different kettles of fish. I also didn’t expect to get into wedding photography — I used to think I’d find it too high-pressure. Which OK, it is, but it’s also a lot of fun and immensely rewarding.”

“[The cameras] these days are pretty old-school choices,” Mitchell says. “But they’re versatile, reliable and hard-wearing, and the L-series lenses give lovely results. I have no doubt I’ll join the mirrorless revolution at some point, though.

“I also use a Manfrotto 190 carbon fiber tripod, and Godox strobes and modifiers.”

Unlike other actors who may seek to distance themselves from a childhood role they’re famous for, Mitchell is happy to embrace his past role as Creevey while pushing forward in growing his new career.

“As much as I don’t shy away from my connection to Harry Potter, I can sympathize with the mindset of not wanting something you did as a child to define you for the rest of time,” Mitchell says. “As adults we want to forge our own paths, and to create meaningful work that stands up on its own two feet. So that’s my ambition with photography.”

You can find more of Mitchell’s work on his website and Instagram. You can also purchase limited edition prints through his online shop.

Culture, Interviews, News
actor, harrypotter, interview, photographer
Related Articles
Discussion
Trending Articles
Crocodile Dad Gives Over 100 Babies a Ride on His Back
May 15, 2022
Great Grey Owl Lands on Wildlife Photographer’s Camera
May 11, 2022
Billions of Fireflies Light Up Indian Tiger Reserve
May 14, 2022
Camera Films Itself Getting Launched Out of a Centrifuge at 1,000mph
May 07, 2022
Ukrainians Say Russia is Still Tracking Their Drones with DJI AeroScope
May 13, 2022