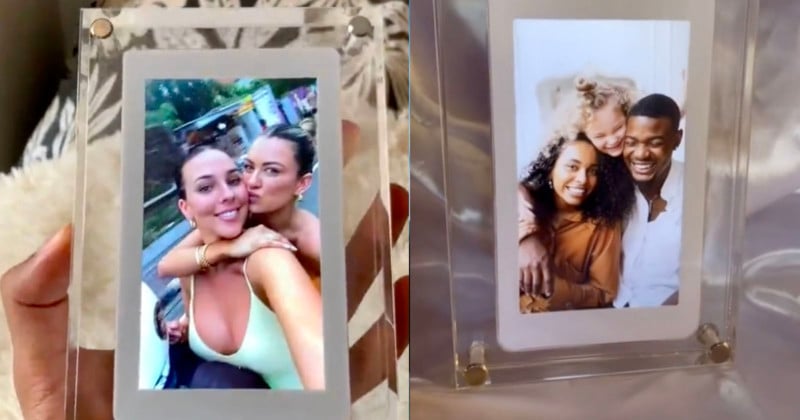 A digital photo frame has been compared to the “magical portraits” in the fictional world of Harry Potter.

Reminds me of the pictures in Harry Potter pic.twitter.com/GAxZKbI4fp

In the footage, an individual switches the motion video frame on from the back and picks it up. The person then flips the frame around to face the camera.

Inside the digital frame, there is a memory captured on video of a pair of women embracing for a selfie on a moving motorbike as they ride past vehicles. The frame seems to be replaying the video memory on a loop.

Gregg posted the clip of the photo frame with the caption: “Reminds me of the pictures in Harry Potter.”

In Harry Potter, a witch or wizard could produce a magical photograph that had been put through a special potion.

While some of the subjects of the photographs might simply be animated images occurring in a continuous loop, some reacted to their surroundings.

Paintings and portraits were also enchanted so that the subjects moved in the frame and spoke like them.

Gregg’s tweet amassed over 2.4 million views — with many social media users agreeing with him and proclaiming that they “want one.”

“I want several and do a cute little Harry Potteresque moving picture wall with my children’s precious moments,” a Twitter user comments.

Another viewer remarks that the frame reminds them of the photos that are “in the movies based on the future.”

Meanwhile, a social media user pointed out that artificially intelligent (AI) deepfake technology could probably be developed now to create moving and talking photos exactly like the ones in the Harry Potter universe.

“You know what, modern deepfake tech could probably make photos like that in Harry Potter, especially if you want them to speak,” the individual writes.

When J.K Rowling’s first novel Harry Potter and the Sorcerer’s Stone was released in 1997, the moving portraits depicted in the book seemed fantastical and futuristic.

However, after Apple first introduced ‌Live Photos‌ in 2015 alongside the iPhone 6s and with the rise of video selfies on social media platforms like TikTok, moving portraits are increasingly common.

While Gregg’s tweet stunned social media users, digital photo frames that display multiple pictures and videos on a continuous loop from the cloud or a USB flash drive are widely available online.