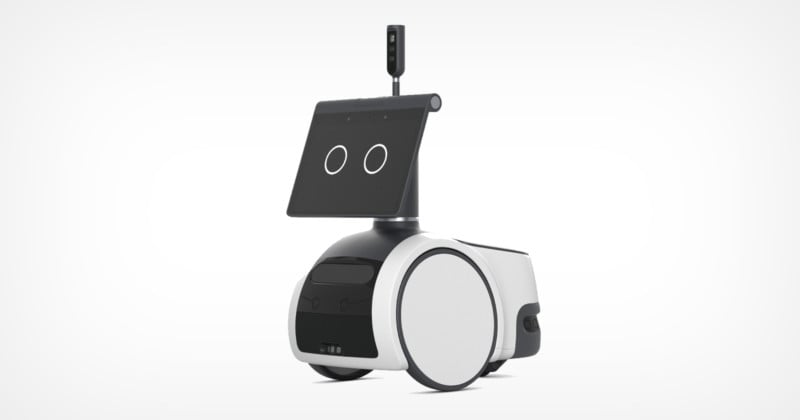 As part of its 2021 hardware announcements, Amazon unveiled both a camera drone that flies around your house as well as Astro, a robot that looks cute but is designed to observe and track you around your home, a new report alleges.

Astro is marketed by Amazon as a tiny wheeled assistant that realizes the science-fiction dream of a household robot that can help with daily tasks as well as provide some measure of home security. The company shows Astro acting as a combination of several of Amazon’s well-known devices, able to make calls and play music like an Echo Show, monitor a house as a security device like Ring cameras or the Ring Always Home Cam, or deliver items to specific users in a house.

But the The Verge’s James Vincent argues that many if not all the claims Amazon makes are “rubbish” and that it is instead just a “camera on wheels.”

Amazon disagrees and says that calling Astro just a “camera on wheels” doesn’t fully recognize everything it can do, and argues that it is much more than that.

“Astro is an entirely new type of robot, specifically designed with a fun, engaging persona all its own,” an Amazon representative told PetaPixel. “Astro uses movements, sounds, and visuals to help and interact with customers in totally new ways. Of course, we think customers will love that Astro lets you bring Alexa to every room you want, in addition to features that help you monitor your home and keep you connected with the people and things you care about. If you do not want Astro to hang out near you, you can disable the hang out feature in settings, and Astro will return to its charger until needed. Astro uses local processing of sensor data to detect people, objects, and pets that may be nearby, and for traveling room-to-room to hang out in areas where it can be helpful. No images or video are streamed when Astro is exploring or navigating through the home. When Astro does stream audio or video data to the cloud, like when you use live view, there is an indicator so customers know that feature has turned on.”

Even so, Vincent’s skepticism isn’t without cause. Vice published a report that cites leaked internal Amazon documents as well as sources at the company who claim that the robot relies heavily on facial recognition and user behavior. Additionally, they claim the $999 device is heavily flawed, fragile, and prone to self-destruction.

Vice and The Verge state that Astro requires face and voices to be logged in order for it to function as a sort of mobile home security device. It uses that information to track specific people in a home and alert owners when an unrecognized individual is seen. According to Vice, users must “enroll” in the face and voice ID upon unboxing the expensive mobile robot.

The company clarifies that enrollment in the visual identification is not mandatory.

“Enrolling a visual ID is optional,” Amazon insists. “When you do create a visual ID, images of your face are used to build a numeric representation of your facial characteristics (called a vector). These images and vectors are securely stored on device. When the device detects a face in its field of view, the image is processed to create a vector of the facial features. Using on-device processing, that vector is compared to the vectors of enrolled customers stored on device to see if the face matches the visual ID of an enrolled person. Customers can also turn off all camera/microphones, set it to do-not-disturb and if they don’t want it to hang around with them, they can send it to the docking station or simple turn of the hang-out feature.”

Amazon also says that Astro can be configured to recognize a host of noises and visual cues.

“Customers can activate Alexa Guard to detect certain noises like breaking glass, smoke alarms, or carbon monoxide alarms,” the company says. “If customers enroll in visual ID, it can detect unrecognized people. Customers with a Ring Protect Pro subscription (a 6-month trial is offered with the introductory price of $999) can enable Patrol where it checks on certain areas of your home while you’re away.”

Amazon is generally perceived as a trustworthy company according to a 2020 Verge poll, so this using visual identification is unlikely to deter prospective buyers.

What might, however, is that the robot just might not work well for its marketed purpose and may end up being a household surveillance device.

“The person detection is unreliable at best, making the in-home security proposition laughable,” a source who worked on the project told Vice. “The device feels fragile for something with an absurd cost. The mast has broken on several devices, locking itself in the extended or retracted position, and there’s no way to ship it to Amazon when that happens.”

On that self-destruction note, just like with the Always Home Cam, Astro reportedly struggles with stairs. While household robots like Roomba vacuums have been able to deal with household “cliffs” for years, Astro will reportedly “almost certainly throw itself down a flight of stairs if presented the opportunity.”

The issue with self-destruction was echoed by multiple sources, and another argues that the device is not anywhere near ready for public release.

Amazon takes issue with this particular set of reports, and argues that Astro is indeed ready for public deployment.

“These characterizations of Astro’s performance, mast, and safety systems are simply inaccurate,” the company says. “Astro went through rigorous testing on both quality and safety, including tens of thousands of hours of testing with beta participants. This includes comprehensive testing on Astro’s advanced safety system, which is designed to avoid objects, detect stairs, and stop the device where and when necessary.”

Despite what Amazon has said, Vice’s report still raises questions. For example, if Astro isn’t great at navigation, can break itself, and isn’t particularly good at most of the tasks that Amazon markets it, what does it do? According to those leaked internal documents, it just watches — all the time.

With a stated goal of making Astro an “intelligent” robot, it needs to observe subjects in a house constantly. It needs to fully map a home and track where it might get stuck and also know where high-traffic areas are that might cause it to collide with the human occupants. The device is supposed to learn over time, but to do so it must constantly surveil its surroundings and its owners. Typically, that means that it needs to be as close to one to one and a half meters away — somewhere between about three and five feet.

Vincent says that Amazon has a shaky history with its lack of care and honesty in how it develops this kind of technology, with racially biased facial recognition systems, hackable cameras, aggressive partnership with law enforcement, and its use of scare tactics to sell products. He argues that with that knowledge, he’s not sure why anyone can or should trust Astro to be any different.

He argues that it, like Facebook’s Ray-Ban sunglasses, isn’t to actually provide a service that is needed but rather serves to get people used to having a camera on them all the time.

Update: Amazon reached out to provide statements that clarify certain points brought up by The Verge and Vice. Those statements have been added above.